Founder of Dermalogica speaks about not giving up 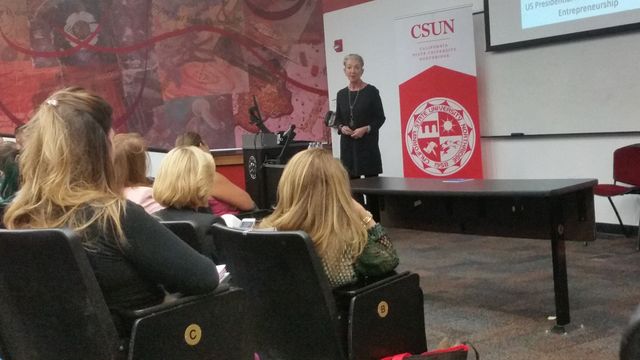 Jane Wurwand explains to the audience how she started her business.

Founder of Dermalogica, Jane Wurwand, came to campus on Tuesday to speak about her experience creating her own business.

Wurwand taught students how to become entrepreneurs and emphasized the importance of not giving up, continuing to learn and finding opportunities in an industry’s issues by telling her life story.

“It does not really matter where you came from, what matters is where you are going,” Wurwand said.

She began her discussion by giving the audience background information on how she was raised. Wurwand explained when she lived in Scotland her father passed away, her mother then began working as a nurse from 7 p.m. to 7 a.m. to provide for her four daughters. It was Wurwand’s mother who taught her to have a career so that she could take care of herself.

The Edinburgh native said when she needed a job, she knocked on doors to ask for one, knowing that in a day or two she would get a job. She was able to obtain a job in at a neighborhood salon. She then became a licensed instructor in skin therapy.

“I walked into the industry, and I never wanted to leave,” Wurwand said.

In 1983, Wurwand immigrated it the U.S. in what she called the biggest opportunity because of the possibilities the country could provide.

“When I got my work permit it was like getting the golden ticket in a Willy Wonka Bar,” Wurwand said.

She admitted that when she and her husband moved to California, she had no clue that the unemployment rate was 10.5 percent. Even though she didn’t have a college education, money or credit, she knew she would find an opportunity.

Wurwand said she realized that opportunity when she found out there was a lack of training in skin care for Americans. She continued to say that in 1983 there were only seven states that allowed skin care treatment.

She took this opportunity to create a school to continue the training of 17 out of 30 skincare specialists in the state and teach them how become entrepreneurs.

When she was in discussion with her students about what skincare products they used, she saw an opportunity in there not being a skincare product in the states that was official. This is how she got the idea to produce her own product even though she did not have the funds.

Wurwand said she would hire anybody as long as they were what she called “dreamers,” people who believed in the vision Wurwand and her team had.

“I’m hiring the person in front of me,” Wurwand said. “I had to meet them first.”

She said when it came down to paying the manufacturer to produce the product she needed 10 people to invest $15,000 in three days. In three hours she accomplished that, and nowadays she is expecting a 40 percent job growth until 2022.

Marco Bedolla, 28, marketing major, said he thought the speaker was great and that he learned a lot about her particularly that she was an immigrant.

Bedolla said what Wurwand said about not giving up resonated with him because he wants to be an entrepreneur.

“It gets hard sometimes when you have people telling you not to do it,” Bedolla said. “But her message was very powerful.”

At the end of the of her discussion, she wanted students to know that they have a lot of opportunities to become an entrepreneur.

“Don’t you ever dare shrink yourself for someone else’s comfort,” said Wurwand. “Do not become small for others who refuse to grow.”