Upgrading the Metrolink to the CSUN experience 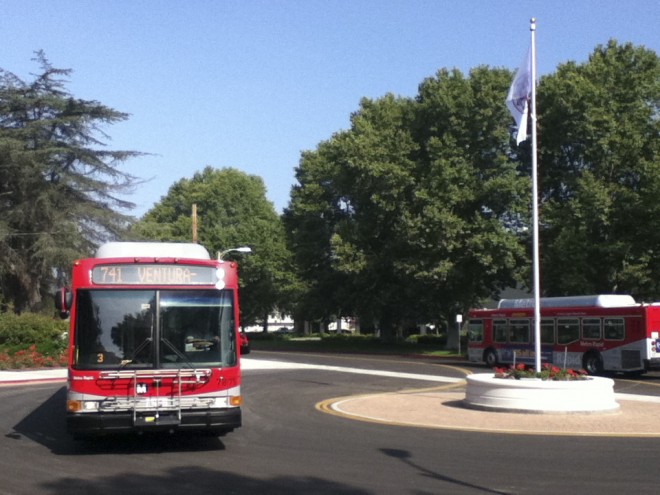 I have thought about upgrading the Metrolink shuttle ever since I rode the campus’ dorm tram in the fall 2016 semester, and found out that the tram and the Metrolink Shuttle are run by a private contractor called Keolis. Ever since, I have felt the shuttles should be run by the university. Further research on Keolis found a poor track record of service and quality. I brought this to the attention of The Sundial back in the spring 2017 semester with two published opinion pieces, a letter to the editor and a follow-up on it in that same semester.

I have a few more ideas, besides taking it public, that I think would greatly improve this commuter experience:

1. Have the LADOT Northridge DASH shuttle extend into the CSUN Transit Center, have it run in both clockwise and counter-clockwise directions, and integrate it and the other transit agencies into the U-Pass.

This, I am honestly surprised, has not been done yet as it would encourage transit use in the area by accessing the large number of students commuting by transit into CSUN. The current U-Pass only works with Metro, not LADOT nor any of the other transit agencies currently servicing the Transit Center. I feel the U-Pass should at least work with all the transit agencies servicing the CSUN Transit Center.

2. Show your support for moving the Northridge Metrolink Station to Reseda Boulevard.

This is uncertain at the moment, but if this move is done, it would eliminate the main need for the Metrolink shuttle due to Reseda Boulevard being a direct shot into campus. Students need to show their support of this project by turning out at Metro board meetings and hearings on it, and it cannot be only one person doing this.

3. Have the buses be low floor.

After riding public transit in LA for six years, I cannot say enough about how effective low floor buses are at improving access and speeding up the boarding and unloading process, especially with people with wheelchairs. They also have fewer liability concerns with no steps to trip on getting on and off the bus.

4. Have the buses run to catch every Metrolink train into the Northridge Metrolink Station.

This is something I brought up previously in the second of my two articles I wrote in the spring 2017 semester.

5. Customize buses specifically for CSUN for a sense of ownership by students

This ties in with making the shuttle services public, but it will also give a new sense of university pride for these shuttles. I wrote about some of these customization options in the first of my two articles.

6. Have the bus fleet run on alcohol/ethanol and pure electric.

This also ties into taking these two shuttles public. The current Keolis buses use gasoline and diesel, and using natural gas will look like supporting the Porter Ranch gas leak. Going electric and using alcohol from fermented food and yard waste collected on campus and in the dorms would be a far more effective and greener then CNG, and could easily be applied outside of the shuttle bus fleet too.

I feel these ideas and recommendations will go a long way into improving the Metrolink commuter, transit and student experience in general at CSUN.