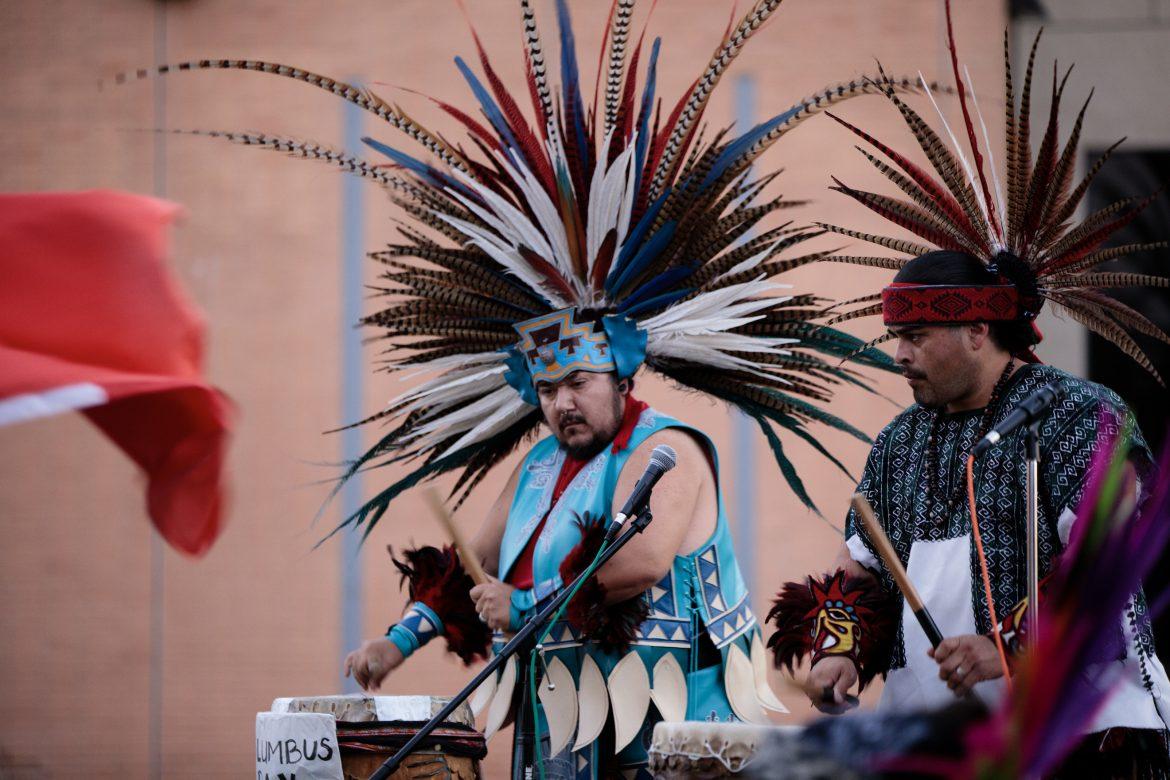 Raul Herrera (left) leads Danza Mexica Cuauhtemoc, SFV in performance art that represents political struggle. "Our affirmation as an indigenous people doesn’t just happen when we put on our regalia," Herrera told the crowd. These are not costumes, this is regalia." Photo credit: Max Sullivan

In a national political climate dominated by discussions on race and the unknown future of DACA students, Movimento Estudiantil Chicano de Aztlan (M.E.Ch.A) made xenophobia the theme of 2017 Endependence Day Friday night at the Chicano House located on campus.

Steven Ochoa, concilio for M.E.Ch.A., organized the event which has a different theme each year to highlight issues of oppression, most notably the Dream Act.

“We want to affirm our solidarity with [DACA students] and our stance on defending DACA,” Ocha said. “In the larger scheme of things, the whole event is dedicated to breaking apart and dismantling systems of oppression for people of color.”

Raul Herrera, who received his bachelor’s and master’s degrees from CSUN in Chicano Studies, led members of Danza Mexica Cuauhtemoc, SFV, dressed in indigenous regalia in physical forms of storytelling. The opening ceremony, “the six directions,” was to acknowledge the four points on a compass, the celestial body above and mother earth below.

“Our group is a political group. We are not here for entertainment,” Herrera stressed to those in attendance from the stage. “Our forms and our dances is not for entertainment but it is to be able to symbolize and represent our political struggle.”

Herrera spoke from a microphone next to a drum that read “Columbus day celebrates hate crimes, murder, rape & genocide.” On Aug. 30 the Los Angeles City Council voted to eliminate Columbus Day from the city calendar and replace it with Indigenous Peoples Day.

Herrera told the crowd that when you take a class in any ethnic studies it awakens your consciousness and teaches you about the inequalities in the United States.

Away from the stage tables sold artwork, t-shirts, pupusas, jewelry and artwork. Leslie Ignacio, a journalism and Spanish double major, sold hotdogs, chips and nachos to raise money for Ballet Folklorico Aztlan de CSUN which is a traditional Mexican dance club founded a year after M.E.Ch.A in 1970.

“I am in support of DACA, for those dreamer students,” Ignacio said. “We are just happy to be here [in support of M.E.Ch.A] because we are a Chicano based club and that is how we began.”

Felix Cruz, who was born in Mexico, said a representative of M.E.Ch.A reached out to him on Instagram to display and sell his art which included a print that depicts a 1984 Orwellian police state where Trump is always watching.

“My parents and my community, their experiences are anecdotes,” Cruz said. “Their stories I try to represent.”

Last years Endependence Day focused on homophobia. Ochoa said it was the first time he had ever been to an event on the topic but exposing students to different experiences is a part of the goal.

“That is what these events are for,” Ochoa said. “To really help people open their mind and learn something different.”

The Queer Collective also had a table at the event. Their president, Pulido, said they have a close relationship with M.e.Ch.A and that he also attended last year’s event.

“I really wanted to come out to support [M.E.Ch.A] because they are always supporting our events and it was a good opportunity for us to spread awareness about our club as well since we are one of the only LGBT clubs on campus,” Pulido said.