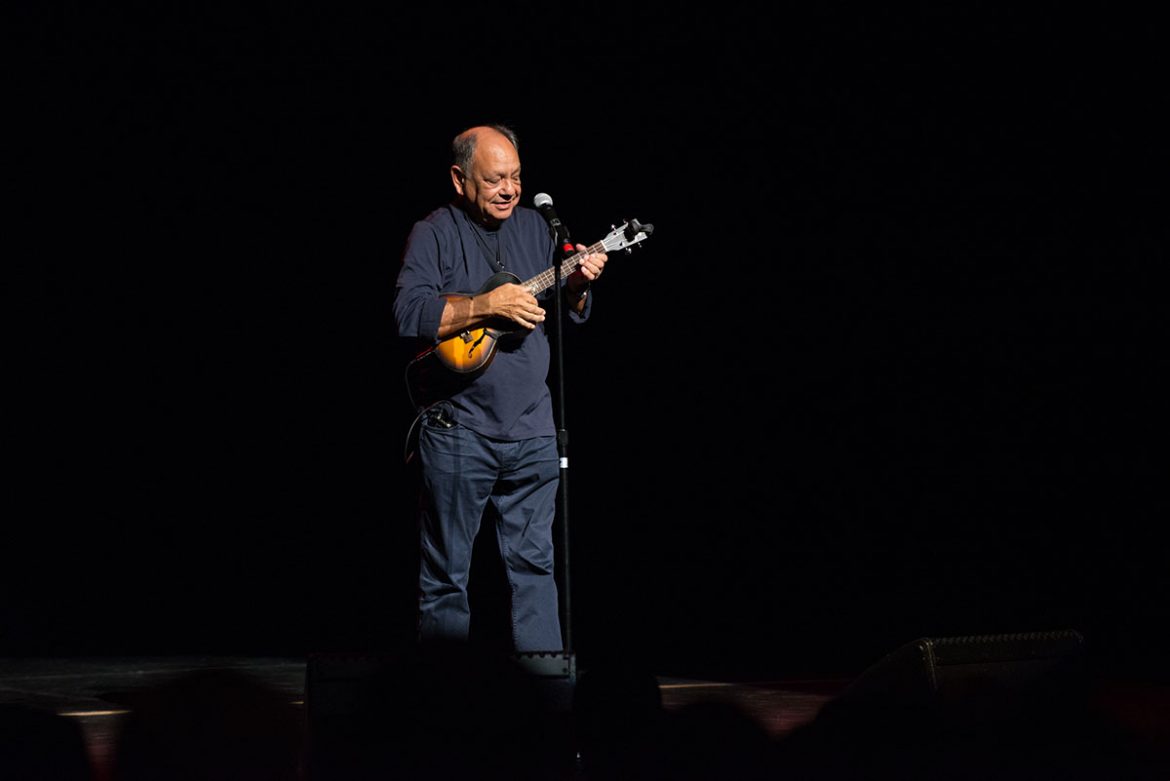 Discussing comedy is famously likened to the process of dissecting a frog. The frog dies, and so dies the humor. But if that is the case for some humor, Chicano and Latin humor are exceptions, for all the discussing in the world couldn’t make it resemble anything close to a dead frog, especially if it’s coming from classics in comedy such as Cheech Marin and Paul Rodriguez or the new and big names on the stand-up scene such as Frankie Quinones, Francisco Ramos and Marcella Arguello, who all performed Thursday night at the Soraya.

Not only did the accomplished, third generation Mexican-American comedian, best known for the comedy duo “Cheech and Chong,” showcase a variety of Latin stand-up comedians, but he also dedicated a portion of the show to presenting the artwork by these up-and-coming and established artists. A Matador himself, where he studied English in the then San Fernando Valley State College, he returned to not just entertain but to also educate.

He brought to the audience a multi-genre, multi-generational and multi-national range of Chicano culture, something much unexpected to, yet warmly welcomed by, the crowd.

Jenny Eulberg, a retired teacher and CSUN graduate expressed her appreciation of the variety of the show.

“I get kind of tired with the jokes and laughing and all that, so I think the flow was smooth and pretty good,” Eulberg said. “I liked the art part too, especially how he [Cheech] was explaining the image.”

Cheech went through each work of art and had something informative to say about the history behind the artist or artwork, and also something of comedic commentary. From photo-realistic pastels of beloved grandparents to Edward Hopper-like oil paintings of taco stands, Cheech managed to take the discussion of Chicano identity further via different mediums.

The narrative of identity played heavily into the stand-up routines as well. Working through the intricacies of culture clash, the comedians told personal stories of family and relationships. Frankie Quinones stated early in his routine, “I love being Mexican. It’s a beautiful thing.” Skilled in impressions, he went on to discuss pop culture diet trends and their influence on his parent’s image.

Marcella Arguello riffed on the misconceptions people have of her based on her physical appearance. She came out onto the stage and began with, “I’m 6 foot 2. Let’s talk about,” asserting that she is not in fact a basketball player, volleyball player or a model and that despite her light skin, both her parents are El Salvadorean. Though Chicano and Latin humor is known to have traces of misogynistic jokes, Arguello broke down that type-cast, mingling politics with feminist humor.

Natalie Gomez, a second year undeclared major, said that Marcella Arguello was her favorite in the line-up. “I wasn’t expecting that tonight would be a whole latin influence,” she stated, “and seeing feminism and seeing a woman in there too that’s great. I really love that they’re bringing politics into it.”

Arguello, along with other comedians on stage, dove into jokes about dating, religion and family and how those elements all contribute and work in culturally specific dynamics.

Francisco Ramos, a top ten finalist on Last Comic Standing 2015, spoke about the many cultural differences he became aware of as a child when his family moved from Venezuela to Maryland. He recalls experiencing racism coming to the US and his struggles learning the English language, but jokes about his triumphs in these areas.

Among folkloristics, jokes are considered to have a place as folk narrative, where otherwise painful experiences are objectified and transformed into comedy, which alleviates the unpleasantness of the situation. Immigration and assimilation, in particular, is picked up and transformed by the comedians.

As Cheech said, Mexican Americans are everywhere, but Paul Rodriguez also noted that though it’s 2017 they’re still an enigma, underrepresented in television and film. Rodriguez, a fore-runner in Chicano stand-up comedy, prevails in promoting a larger scope to the stand-up scene and Cheech, a fore-runner in the curation of Chicano art, also brings recognition to underrepresented talent.

By 2020, tentatively, Cheech plans to open his own art museum, “Cheech Marin Center for Chicano Art, Culture & Industry,” in Riverside. Through curation and comedy, Cheech continues to champion Chicano art and humanities.