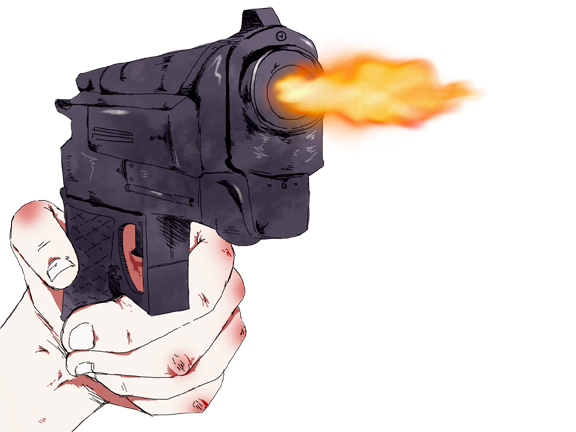 The United States has 88.8 guns per 100 people, which is about 270 million guns, making it the highest total and per capita number in the world according to Procon.org.

With the recent mass shooting in Las Vegas killing 58 people the topic of gun laws is something that people are having trouble picking a side on.

According to CNN, police found 23 weapons in Stephen Paddock’s hotel room. Paddock allegedly bought 33 deadly weapons over the past year.

One question that comes to mind after this tragedy is whether guns are the problem or whether its the people.

“Evil people will do evil things, but guns make it easier for people to do those things and it makes them easier to cause widespread damage and not be limited,” Hughes said.

According to Hughes, the weapons that were allegedly used were regulated and it’s easier in the state of Nevada to obtain such weapons.

“Unfortunately, nothing is going to come out of this from a government standpoint just as Sandy Hook, San Bernardino and the Pulse nightclub shooting,” Hughes said.

Hughes feels this issue is one of the many areas in American politics that are divided on, especially on partisan lines and where congress cannot find common ground.

“Even with straight-forward practical measures such as background measures, waiting periods, the two sides cannot pick a common side,” Hughes said.

According to the FBI, more than 230 million background checks have been processed before buying guns since the year.

Officials said Paddock passed the mandatory mental health test in order to buy the semiautomatic weapons used in the killings, but the matter of how many he purchased is questionable.

CNN reports that gun rates are higher in America than in any other high-income country.

Political Science major William Shumat said he should not be the one to state how many gun one could buy but, that is a conversation needs to be had about gun control.

“One of my uncles owns over 60 guns but he is well aware of gun safety,” Shumat said.

Shumat said that growing up in the south, he learned how to use a gun at the age of five, but never in a violent way and was taught specifically how to handle it for good and not for bad.

“I don’t believe that people shouldn’t be allowed to have guns at all but laws need to be implemented,” Shumat said.

Political science major, David Cahue thinks both people and guns are the problem.

“We have such easy access to them and because we have people with malintent. People are so unpredictable and can snap at any given moment,” Cahue said.

David believes automatic weapons should not be so easy accessible to Americans as they are.

“The NRA is so quick to defend their guns but when something like this happens they want to turn a blind eye,” Cahue said.

“The whole argument of ‘guns don’t kill people, people with guns kill people’ is so ridiculous,” Cahue said, “People wouldn’t kill other people as much if guns weren’t easy to purchase.”

Cahue believes the shooting could have been prevented if laws were changed.

“In the last decade, we’ve had so many shootings and it’s really sad because if we took precautions beforehand something like Sandy Hook or this (Vegas) wouldn’t have happened,” Cahue said.