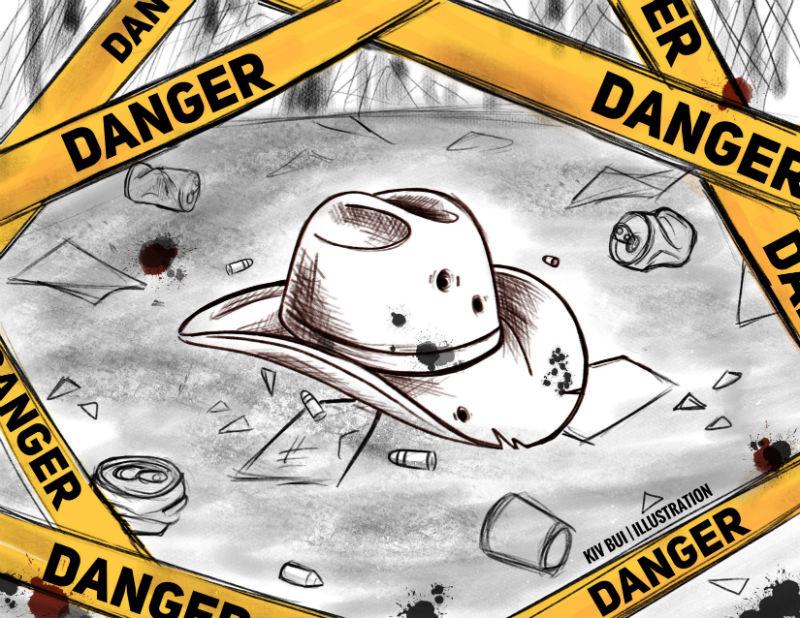 As America recovers from the events of Las Vegas, people are still fascinated with how an average American white man could commit such an atrocious crime to humanity.

As I watched the news casts of the nefarious and dastardly events that went down in Las Vegas on Oct. 2, I breathed a sigh of horrid relief. This sigh of relief was not from understanding that friends were uninjured, or that I basked in the deaths of strangers, but rather because the shooter was not middle eastern and my people would not be antagonized that day, not at the hands of another white man and his ally, the media.

Though I’ve had conflicting feelings like this in the past due to America’s need to stereotype, it was never on a scale so detrimental, horrid, and selfish that I could not forgive myself for this type of thinking.

However, I was comforted in classes the next day as I heard various students admit to the same conflicted sentiment and feelings, and express the fact that they were “…glad he was not Latino” and “…glad he wasn’t black.”

Despite the fact that the true tragedy lies in the deaths of innocent music festival goers, what was astonishing was the fact that the media decided to portray the shooter, Stephen Paddock, not as a terrorist, or a thug, or a gang banger, but merely as a shooter – a kindness that would not be extended to a person of color.

Rather than demonizing him, Paddock has been given an identity and a specific name, “The Las Vegas Shooter”, rather than a general derogatory term. This identity will always be attached to him and that is what will go down in history.

The media has been too quick in humanizing the people that don’t deserve it while demonizing people of color. Furthermore, the entirety of the white race will not be held responsible for the actions of one man like every other race would.

In some ways this is a victory for Paddock. He will not be generalized like the many who came before him and weren’t given a chance to have their own narratives, who weren’t afforded the chance within the media to explain ‘why,’ or to be humanized.

There are countless accounts of Paddock being the picture of a family man and testimonies of the kindness he would extend to others. There are whole profiles floating around in various news outlets attempting to explain Paddock’s surprising attack given that he seemed to be a kind and caring man. I have not read one article that has left out this twisted narrative.

Paddock, like the local terrorist he was, does not deserve our sympathy through the media’s portrait of him.

This event sends the message that white people will always have the opportunity to be forgiven and understood while people of color will be tossed aside as the villains of every news story.

It is not so much the attempts of satisfy the need for an explanation of Paddock’s heinous crime, but that the media has never extended this courtesy, this privilege of humanization to any other terrorist, or thug or criminal that was not of the white race.

Any other race would be labeled a villain, a person with no motives other than to cause terror. They would not be covered as a human being with a family, with no disposition to crime, other than this one folly. They would be considered pure evil, then the media would call it a day.

The media will always protect whiteness like a child that ‘means well’ yet still inflicts harm to those around him, and treat every other race as the sibling that fears to stand up to their sibling lest their parents reprimand them for antagonizing their favorite.

The media has given him a victory in this behavior towards him rather than condemnation. His story will live on in this world.

Until a sentiment of understanding towards every race is widely shared, a message will be sent that you are not human if the pigment of your skin is anything too far removed from alabaster.

He would be demonized and considered a monster, as he rightly should.