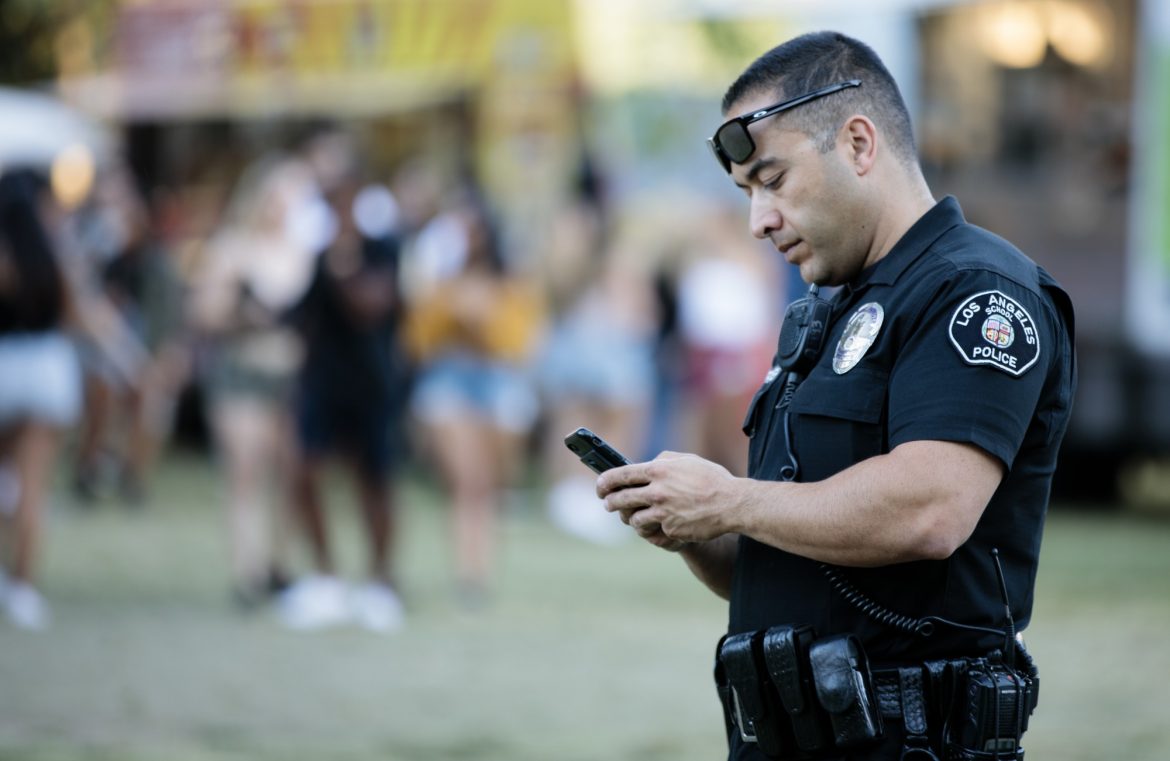 Officer Amirzaneh of the Los Angeles School Police is a CSUN communications graduate who says it is great to be able to return to work an event at his alma mater. Photo credit: Max Sullivan

In the wake of 58 murdered at a country music concert in Las Vegas, the Department of Police services heightened security for the estimated 4,500 who attended CSUN’s Associated Students concert the “Big Show” featuring Dillon Francis Saturday evening, according to Public Information Officer Christina Villalobos.

Concerts should be a “place of unity and togetherness” for people to enjoy the music, according to communications student Lila Noori.

“It sucks because now we have to be afraid for our lives because when we round up so many people in one place we have the fear of somebody attacking and getting a large group of people all at once,” Noori said.

Prior to the show, officer Canady and his police dog, Tank, patrolled near the entrance before students passed through two layers of security including a metal detector. Their event staff possessed a long list of items not allowed into the venue including backpacks, purses, lip balm and pinatas.

Security increased in order to achieve Police Services’ goal of a safe event in response to the Vegas shooting, but Police Services will not disclose the specific details. There were zero arrests and two hospitalizations, according to Villalobos.

Staff allowed concert goer Kevin Kong to enter after using a wand to check him. He believed the strong security presence provided a safer environment once inside and the metal detectors reduced the chance of a shooting to occur. He said he believed the process is stricter than events at other universities.

“It does give an extra sense of safety and protection,” Kong said. “It will be less of a chance of a situation like Vegas happening.”

Security held up Randi Martinez and CSUN alumni Kevin Ballerat, CTVA major, at the metal detectors where pockets were emptied before determining hand sanitizer is allowed into the concert. Martinez said they are “better safe than sorry.”

“We were a little hesitant [to attend],” Ballaret said. “My friend told me there was a lot more police than usual. It feels a lot safer.”

Many other students expressed that they prefer the security to be strict.

Volunteers for the Big Show had about an hour of training, according to recreation and tourism management major Chandler Haskell, who passed out free water to those in attendance. The training included protocol, the plan if anything happened, what to expect and to look out for.

“During the training for volunteering they talked a lot about security and they were really reassuring about everything so I felt pretty comfortable,” Haskell said. “It’s been on my mind but I feel safe.”

One of the concerns in a concert is that those in attendance panic and run leading to people being trampled. Sophia Lopez, graduate nutrition student, already made note of all the possible exits and discussed an emergency meeting point with her friends.

“I already know where I am going to run at this point but that is because we are conditioned in this day and age,” Lopez said.

Noori echoed her sentiment and said it is something they have considered even before the Las Vegas shooting.

Some students expressed less concern and take confidence in their friends.

“I don’t give a fuck. I know [my friend] Takia will tackle anybody and my friends will handle it,” said psychology student Frederick Herrera. “I feel somewhat safe, but I have instinct and I will trust my instinct.”