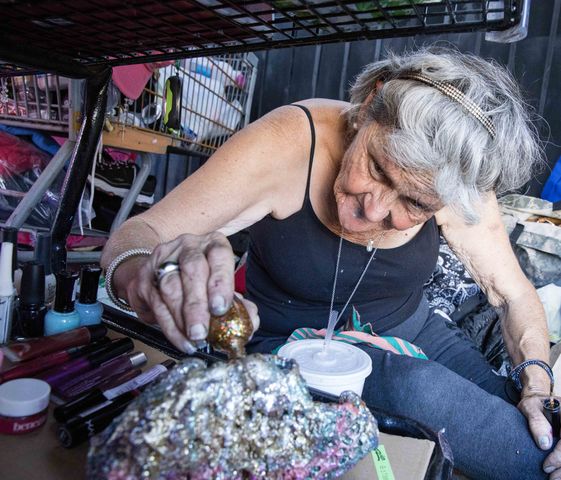 Lynda Zazanis paints a lava rock with nail polish inside her tent on Aquaduct Avenue near the 405 and Nordhoff on Sep. 28

Multi-colored nail polish squeezes out of the bottle and drops into crevices in a lava rock. It is one of several pieces Lynda Zazanis is working on to build up her collection of abstract art painted exclusively with nail polish. After the LAPD arrested Zazanis, she said officers confiscated or threw away all of her possessions for trespassing on state property on Sept. 23.

“My painting is the only thing keeping me alive,” Zazanis said.

Two others in Zazanis’ camp on the apron of the entrance to the 405 north on Nordhoff Street were also arrested the same day. Manny Flores, a community liaison for North Valley Caring Services (NVCS), said LAPD assigned a new task force to disperse camps in the area.

“Lynda’s camps was one of the first camps where they started this process of applying as much pressure as they can to make people leave the 405 corridor,” Flores said.

Flores believes their camp was an easier target because it is out in the open, opposed to the trails between Plummer and Saticoy where he estimated there were 200 people living before Caltrans cleared it out last week. Flores has a relationship with many of the homeless in that section of the trails because he regularly brings them food and blankets in hopes that they will take advantage of resources he can offer them directly through NVCS.

“It becomes a third world, if you will. Nobody knows what goes on back there,” Flores said. “We are talking about drug sales, prostitution, violence toward the homeless, homeless on homeless violence and exploitation. We are hearing about people having their tents doused in gasoline.”

The homeless who lived on the trails who were evacuated are now scrambling to find a place to sleep and clothes to wear after having their possessions thrown away. In the past week there has been an increase in homeless visiting NVCS for showers, meals and clothes, according to Flores.

Gracie Crilley, 66, is one of two in the camp who was away when police arrested Zazanis and released her two days later. Crilley said she understands the need to clean up so nobody gets diseases, but that the harassment by law enforcement is largely unnecessary.

Zazanis said one of the struggles of being homeless is not only conflict with law enforcement, but with other homeless people.

“People in apartments and houses don’t have to worry about if their tent is stolen or if their clothes, artwork and equipment is stolen everyday,” Zazanis said. “They walk out with something of yours because they are a heroin addict or a whatever addict. That is what really sucks about being homeless.”

Flores is concerned that the strategy to remove everybody from the trails creates a whole new set of problems, by just moving the violence, prostitution and drug use to parking lots and in front of businesses.

“The activity that was taking place back there is not one that is easily going to be left behind,” Flores said. “That means it is going to be more in your face.”

Flores said he recommended to the task force to place lights on the trails and open it up to the public. An agency such as NVCS can adopt a section of the trails and do beautification eventually opening it up to children to ride bicycles in a high traffic neighborhood.

“It would be good for the community because we do need that bike trail,” Flores said. “If people are using it as a park they won’t be able to squat.”

Law enforcement rarely enters the trails unless they have four squad cars, according to Flores. He assumes if the homeless are moved into a more public setting, it may also be a benefit in the long run.

“If law enforcement is having more interactions with people on the street then that is ultimately going to be better for housing,” Flores said.

According to Flores, the homeless issue is a huge problem and everybody needs to get on board to tackle it.

“We all need to sort of take our chunk of this problem and start chipping away at it, at whatever level you can,” Flores said.

Zazanis lived on the trails until November of 2016. Then she moved under the 405 bridge on Nordhoff Street. Zazanis said in the past 10 years she has been forced to move hundreds of times. Crilley has been with her for many of the moves and both have hopes of being placed into housing by January.