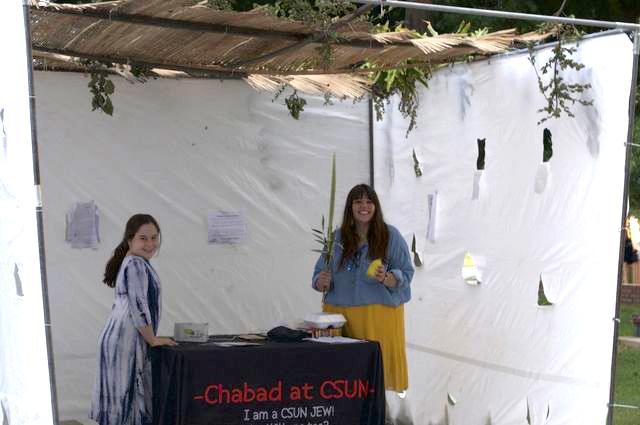 When students and faculty arrived to campus on Monday morning they may have noticed a sukkah in front of Sierra Hall. The sukkah is a hut used to celebrate the Jewish holiday Sukkot, which celebrates the years the Jewish community spent in the desert on their way to the Promised Land.

Religious studies major, Philip Michalowicz, said Chabad at CSUN reaches out internationally and shows people how accepting the religion is.

“The holiday is the perfect emblem of this [sukkah] because it’s a temporary structure that you can put anywhere and commune with Jews and non-Jews,” Michalowicz said.

There are three walls to the sukkah which represent when God surrounded them with clouds. The sukkah has to be placed in an open space where the sky can be seen while inside and looking up.

According to Chabad.org, the roof must have unprocessed materials like bamboo poles, thin wooden slats and evergreen branches.

CSUN alumna, Sandra Bram, has been inviting the CSUN community into the sukkah and spreading awareness about Sukkot.

“People are intrigued by the sukkah, we have to be a light on the nation,” Bram said. “The sukkah is for people to eat and sleep in, and we usually have pizza.”

When it comes to sleeping in the sukkah, 12-year-old Mushka Brooke said that is not her custom. She was accompanying Bram when spreading awareness about Sukkot and passing out cookies to faculty, staff and students.

Bram jokingly explained that the Harlem shake (a dance move) came from the Jewish tradition of the four species of Sukkot being shaken. Students were given the opportunity to shake the four species, which is also known as the Lulav and Etrog.

“It’s made of willow, myrtle, citrus fruit and a palm branch,” said Brooke. “Each piece represents a different Jew.”

Sukkot started Oct. 4 and ended on Oct. 11, and Bram realized how Sukkot unites all Jews as a whole and described it as “JEW-nity.”