Too close to home: the Las Vegas Massacre 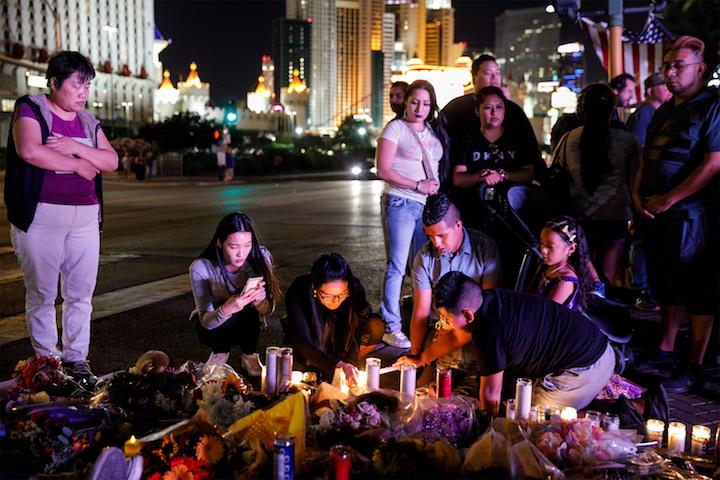 People visit and pay their respects at a makeshift memorial for the victims of the recent mass shooting, on Reno Ave and Las Vegas Blvd. on Oct. 3, 2017 in Las Vegas. (Marcus Yam / Los Angeles Times/TNS)

The high-pitched blaring tone of my alarm signaled the start of another week. I unwillingly pried my eyes open, planted my feet on the cold wooden floor, and flipped on the news for some background noise. The usual almost-too-cheery faces of the morning anchors were replaced with strict solemnity as they recounted the previous night’s events. A lone shooter opened fire during the Route 91 Harvest Festival in Las Vegas, killing 59 and injuring over 500.

Videos of victims and gunfire flashed across the screen as ice invaded my veins. My stomach dropped, my vision blurred and a relentless sense of dread washed over me. The city whose parks I took my first steps in, sidewalks that battered my youthful knees and homes that sheltered my family was now known as the site of the deadliest shooting in modern U.S. history.

An unanswered phone had never felt so unbearable. Was my uncle at work as a Bellagio security guard last night? Did my grandparents take a rare dinner date on the Strip? Was my childhood best friend enjoying her favorite music with her toddlers when the shots rang out?

It took a few hours, and a few panic attacks, before everyone had been accounted for, but as the texts and social media updates rolled in, it became apparent we were the lucky ones. A young woman from my close-knit neighborhood was shot in the chest; she would never make it home. My boyfriend’s former classmate was missing and presumed dead. Friends pleaded on Facebook to be reunited with their loved ones, who they had been separated from in the melee.

Like many others, I struggled to cope with the onslaught of emotion. Las Vegas is my home away from home; it felt unfathomable that one man could systematically plan the murder of teachers, nurses, police officers, veterans, parents and children.

But it had happened before, 273 times in 2017 alone. Nearly one mass shooting for every day of the year. It was agonizing when 49 were murdered in a nightclub in Orlando, when 14 were shot in San Bernadino,when 9 churchgoers were slaughtered during prayer and when the last thing 20 first graders saw was the barrel of a semiautomatic rifle in Connecticut. We cry out in anger, send our prayers, yell “gun control” until we’re blue in the face and then sit idly by as our elected officials pass legislation that makes it easier for these exact situations to happen again. Columbine was unfathomable, Las Vegas was preventable.

White House press secretary Sarah Huckabee Sanders said in an Oct. 2 briefing, “there’s a time and place for a political debate, but now is the time to unite as a country.” However, if you look at the public and legislative trends from previous shootings, it becomes clear this is the only time for a political debate. Polls from CNN, Gallup, and Quinnipiac University show a significant uptick in support for more restrictive gun control laws after a mass shooting, but this sentiment quickly fades as people move on. This trend of short lived pressure allows Congress to feign action, then escape unscathed when the bills eventually fail. This feel-and-forget cycle has perfected the conditions that have allowed 11,733 people to die from shootings this year.

American gun culture is unique. Only two other countries have a constitutional right to bear arms, Guatemala and Mexico, and ours is the only one that does not include restrictive ownership conditions. Our historical entanglement with guns is a central aspect of the gun control debate. 74 percent of gun owners say the right to bear arms is “essential to their own sense of freedom,” according to Pew Research Center. Many gun owners see gun control legislation as a direct attack on their conditions of citizenship and the history of our nation. A drastic change to our gun culture would undeniably illicit an emotional outrage from those 40 million Americans who view guns as an irreplaceable right, and this deters people from the conversation.

There is no quick fix to mass shootings, and the end of our horrifying tunnel of violence sometimes feels light-years away. People are fearful of the effects of change, and the continued consequences of silence. But are we going to throw up our hands because the questions were too tough? Are we going to wait to care until it’s our own family being shot at? More than half of the victims were Southern California residents, according to KTLA 5. When is close to home close enough to enact change?

I often wonder what I would have done if I was present for moments of historical significance. Would I have rallied for Roe v. Wade, protested the Vietnam War, or joined the March on Washington? Well, this is going to be remembered as one of those moments. This is our time to change history. It’s up to us, not just our government, to ensure more people don’t die for nothing. Transform your justified anger, confusion and sadness into action. Demand more than thoughts and prayers. Demand change.

Text “RESIST” to 50409 to get in touch with your local congressman or congresswoman.