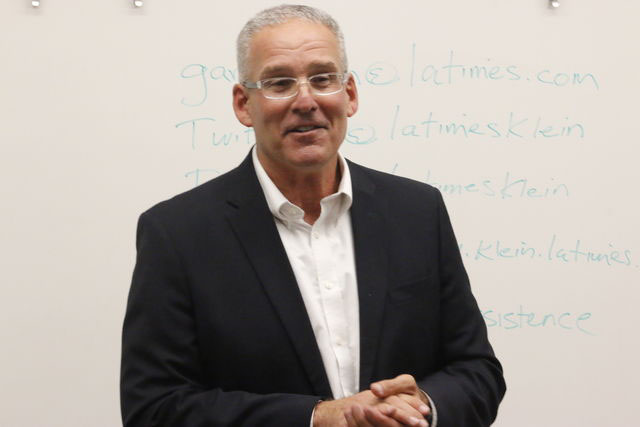 Gary Klein, beat sports reporter for The Los Angeles Times spoke for one hour about his journey of becoming a journalist. Photo credit: Julio Mendez Ulloa

Klein spoke about his beginnings in journalism and also gave students some advice on how to succeed.

Throughout the hour meeting, Klein talked about the importance for journalists to create good sourcing networks and collect their contact information.

“People talk about how journalism is a dying business and how there is no future,” he said. “Well, it just evolved to different realms that never existed before.”

Alexandra Mares, president of the SPJ, said she decided to reach out to Klein because he was a CSUN alumni.

“I saw his name and I saw CSUN graduate so I thought he will probably reach back out to me more than if I were to reach out for someone who went to Fullerton or Long Beach,” Mares said. “He was really nice and I guess him being a CSUN alumn is what made me chose him.”

Students were given the opportunity to ask questions and Klein shared some of his favorite memories while he was covering USC athletics, including when USC beat Notre Dame in a 2005 regular season game.

“When you are in the middle of it you don’t really think about that [how much fun you’re having] but looking back that specific game was really fun because ten years later I did a story where I went and spoke with many of the people who were involved on both sides,” Klein said.

The Los Angeles Time reporter also said he enjoyed working with other people and overcoming difficult situations with them.

“I’m someone who grew up playing on sports teams so it is also that kind of collaborative element for me. There is nothing better than to go out and cover a big event and we have our columnists there and someone else doing something,” Klein said. “It’s not really the event is more about the work that went in while we were covering them [stories].”