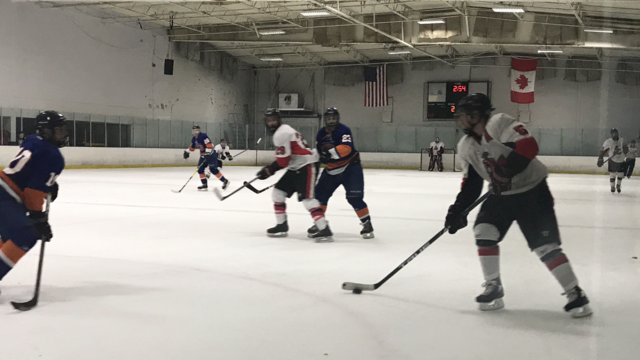 Cal State Northridge opened West Coast Hockey Conference play on home ice in its quest to defend its conference title. But a late goal from Cal State Fullerton saw the game slip away.

The Titans scored with 53 seconds left in regulation and defeated the Matadors 4-3 at the Iceoplex in Simi Valley.

“Overall, we didn’t put in the effort and we just got outworked,” CSUN head coach JP Gale said.

CSUN’s senior Evan Wright dished a pass right through the goal crease to Garrett Heftye who buried the goal and the Matadors led 1-0.

“The puck was tied up on the boards and I started creeping in because I knew that it was going to pop out,” Heftye said. “I started heading to the net. Evan [Wright] had the puck; he made a nice dish across and I just buried it.”

Fullerton would cash in on a five on three power-play late in the first period, leaving the game tied at the end of the first.

“We lost focus half way through the first period,” coach JP Gale said. “We took a couple bad penalties and weren’t resilient after that. We were watching and weren’t moving our feet.”

The Matadors saw an opportunity on the power-play slip away and the Titans scored on a short-handed goal.

Northridge’s fought back at Fullerton when Mason Yuen intercepted a pass and ripped a slap shot past its goaltender to tie the score.

“I stuck with my game; I pinched the blue line,” Yuen said. “I caused a turnover, saw the puck loose, scooped it up, skated in, took a low shot and it went in.”

Matadors team captain Alex Reints generated a play and get got team back in the game. Reints found Alex Marbach at the top of the blue line and Marbach skated through the traffic to the front of the net and retied the game at 3-3.

“I saw Reintsy [Reints] get tied up on the boards,” Marbach said. “I called for the puck and he slid it over to me. I saw a lane to the net. I took the shot and it ended up in the goal top shelf.”

The Matadors look to rebound quickly in its quest to defend its the conference title and will play Cal State Lutheran at Staples Center on Wednesday.

“We just have to put this game behind us and get back to the ways we were playing against GCU and in Idaho,” Reints said. “We have to go strong against CLU, get a strong outcome this weekend against some heavy hitters, get us back on top and get back to .500.”

The team will then travel Friday to play San Diego State on the road before returning home Saturday to host Long Beach State.

“We have three games next week,” Gale said. “We have to get back to the routine and get working for Wednesday.”