From social media to international news coverage: where is Somalia? How students can broaden their news perspective 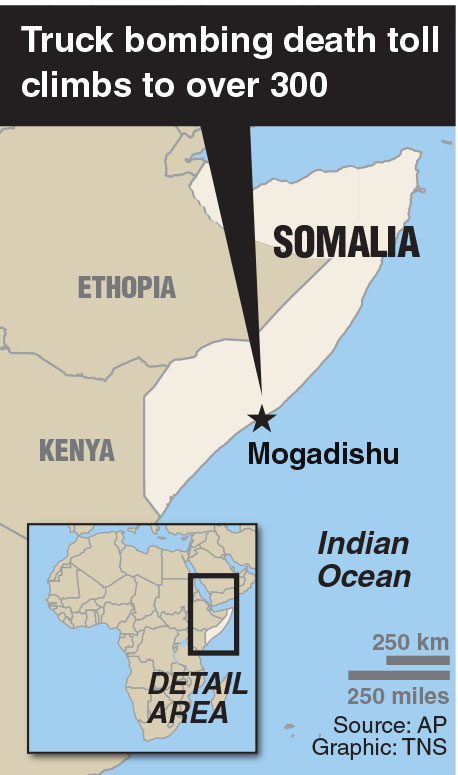 At least 300 people were killed in Somalia Saturday night after two vehicle bombings went off, sources suggest that Al-Shabaab may be behind the bombings and so far one involved member has been detained.

Psychology major Mahad Ali is from Somalia and he said it is important CSUN students know about the country’s current state.

“The country is developing from scratch right now. New people are being elected… but then we have Al-Shabaab taking over the country,” Ali said. “They not doing what they are supposed to do or what they’re supposed to stand for, they are killing innocent people for no reason.”

When asked about Somalia, many CSUN students shrugged their shoulders and knew little about the bombings in Somalia, but communications major, Kahlil Young, knew more than 200 people died because of the bombings.

“I really feel like Twitter is kinda the only place that I really get unfiltered news. Social media plays a huge role and the media has a duty to give real information about the real stuff that is going on,” Young said.

Africana studies professor Sheba Lo said students may not be connected to Africa as a continent, but her community is.

“I don’t watch regular news,” Lo said. “I stream Al Jazeera news so I maybe get more of a global perspective but my social media feed has been updating the numbers.”

CNN was one of the first U.S. and international sources that reported more than 30 injured people were air lifted to Turkey by military ambulance after the Turkish minister arrived to the country’s capital on Monday.

Ali said students need to know what is going on around the world especially in countries that are being highlighted in social media.

“Somalia is 75 percent good it’s the 25 percent that the media [highlights] that makes it seem like it is 100 percent bad,” Ali said.

Lo also said Black Hawk Down and how the American perspective and news affects what history our society would know about other countries.

“We don’t have that idea that people have on the continent when they talk about how America invaded Somalia and the kind of damage that they did there, we don’t get that perspective on American news,” Lo said.

Mogadishu is Somalia’s capital and aside from the American invasion in 1993 and attacks from Al-Shaabab this is the deadliest assault in the country’s history. International news sources say dozens are missing and hospitals are running out of beds.

Al-Shaabab is a militant Islamist group but it is not confirmed that they are directly affiliated with these bombings even though they have recently increased their attacks in Somalia. The man detained by Somalia officers was driving a vehicle with explosives into the city on Saturday, according to The Guardian.

As a campus community Lo is upset that students and faculty are not talking about Somalia. In order to be prepared for the real world, Lo believes students need to travel, read and watch international news.

Mogadishu, is Somalia’s capital and this is the deadliest assault in the country’s history. International news sources say dozens are missing and hospitals are running out of beds. Young believes that in order to get international news students need to take it upon themselves to get information.

“Social media apps, looking at newscasts, the NPR series would really help mobilize people and keep them informed,” Young said. “Sometimes it’s hard to get the news if there is nothing for them [outlets] to benefit from, you have to go to other public spaces to really get that unfiltered and unbiased information.”

Here are a few ways the CSUN community can broaden their news perspectives globally:

From the ABC, CNN and FOX international sources like Al Jazeera, The Guardian, BBC and The Associated Press have news coverage from around the world.

Talking to multiple people about stories

Talking and hearing other perspectives helps create a better understanding of news stories by engaging with students, friends, professors and family members.

Social media is a huge platform for news only if you check the news aspect, which includes explore pages and hashtags, news account followers can stay updated with livestreams, immediate tweets, Facebook statuses, Instagram posts and now stories.

Interacting with other people on social media about stories

Hashtags are for users to engage, from a retweet or a repost to an actual comment conversations with random social media users allows to build community and develop opinions.

Listening to news instead of music

Headphones are not just for music news sources have apps and web content with audio and television broadcasts for listeners all over the world.