You don’t own me 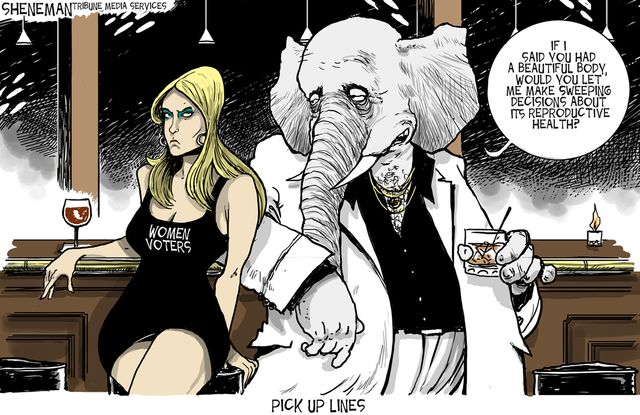 Recent attacks from the Trump Administration on health care coverage now attempt to tear that control from our hands. Regulations passed on Oct. 6th now make it acceptable for employers to refuse to cover birth control for women on the basis of religious or moral objections. Is it the view of the government that religions have more right to my reproductive system than I, an atheist, do? Keep your God out of my ovaries (that’s what Mary said).

People would be in an outrage if a business forbade all its female employees from conceiving children; it would be a matter of national scandal. So why is it acceptable to forbid her not to conceive a child? By preventing women from being able to control when or if they have a child, businesses and the government are directly contributing to the masses of single mothers who struggle to juggle a career and childcare – and are usually referred to as “bad mothers” when they leave their children with a babysitter so as to provide for their unintentional family. And don’t say that celibacy is the easy answer because we’ve all watched that “Not Anymore” program. Intercourse and it’s side-effect are not always optional for all parties involved and there is a certain cultural resistance to aborting that aforementioned side-effect.

Haven’t we moved past the belief that a woman’s purpose is, primarily, to serve as breeding stock? Are we moving towards a society more reminiscent of that depicted in The Handmaid’s Tale where religion and male interests control all aspects of female existence? I don’t look good in red.

We need to stop calling those pretty little pills “birth control.” According to the Center for Young Women’s Health’s website, the so-called birth control pill is used for many other conditions beyond the accidental production of an human being. These include preventing endometriosis, and regulations of cramping (gentlemen, imagine a kick to the stomach that doesn’t go away for a week) and irregular bleeding; the pill also lowers the chance of being inflicted by endometrial cancer, ovarian cancer and ovarian cysts. Little minor things, really. Cancer is never life threatening, right? Perhaps we should start calling the pill a cancer and cyst prevention method that may have the minor side effect of temporary infertility. If men had a method of preventing testicular cancer that just happened to cause their swimmers to malfunction, I’d put money on most people being all for it.

According to a recent article in the Washington Post, 58 percent of women use the pill for reasons additional to pregnancy prevention while 14 percent of women have no interest in its baby-preventing powers, only in its life-saving and life-improving ones. That leaves only 28% who are on it to stop from ending up with a child they may not be able or interested in raising and supporting for the next 18 years (and that’s assuming they don’t end up with the dreaded basement-dweller-at-40 variety). But, apparently, all of us on the pill are immoral anti-religious anti-mothers because we have stopped ourselves from adding another child to this already over-populated world for the evil, personal gain of physical and hormonal health.

Women have more to contribute to this world than as mothers and wives. We make up half of this planet. By the rights of the concept of sharing taught to us all in preschool we should, legitimately, be entitled to control over half of it. Yet our representatives in the American Congress consist of less than half-of-half of the total. Yet it’s that very government that is making laws governing what we can do with our bodies. In the words of singer Lesley Gore, “You don’t own me.”

Stop saying that women’s fight for equal rights is over. We’re just getting started.