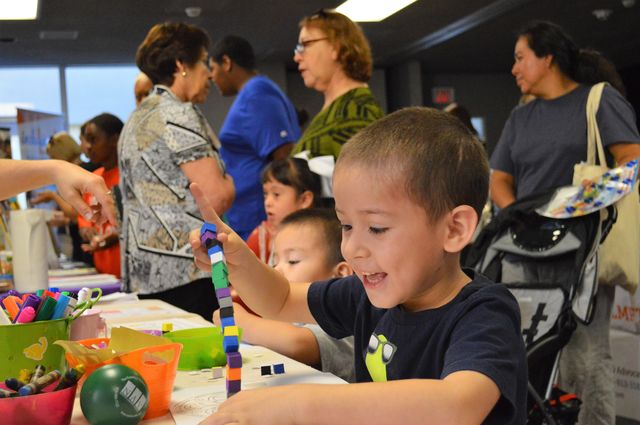 Children played excitedly with the toys laid out on nearly every table, allowing their parents to speak with representatives

CSUN hosted its fifth annual Special Needs Resource Fair on Sunday, which is dedicated to connecting families with children with special needs to an array of resources in San Fernando Valley.

Families led by their excited children arrived at the University Student Union to dozens of informational booths, carnival games and a live band. Parents stopped by tables, collecting pamphlets and speaking with representatives, as their children were kept engaged with toys and candy.

“Information is everything,” said Karen Quarterman from the San Fernando Valley Community Mental Health Center. “Especially for children it’s important for them to know what’s out there.

L.A. Parent Magazine was present, handing out copies of their newest issue of Inclusive L.A., an edition designed for parents of special needs kids. Discovery Toys set up a designated play area filled with safe toys and chairs for parents to watch. The North Los Angeles County Regional Center had voting information available to encourage adults with disabilities to be politically active.

“We’re trying to make our politicians realize we matter,” said Jessica Gould, a board of trustees member for the NLACRC.

A small stage was set up in the main hall, and a speaker discussed how to safely perform lifting and muscle exercises with student volunteers. A dance group from Ballet for all Kids followed suit, showcasing their talent in a series of performances.

Mallory Moxley’s mother said she found Ballet for all Kids when she became interested in enrolling Moxley in dance classes, but had trouble finding one that could work with her specific needs. Moxley has been in the program since she was 5 years old, and smiled exuberantly when asked about the performance.

“My favorite part was everything,” said Taylor Klaus, another dancer from Ballet for all Kids.

Many families took a break from the event in the USU to share fries from the Rounds Burgers tent and listen to The Conductors, a train themed band. Siblings took pictures in the photobooth as parents sifted through their tote bags filled with business cards and pamphlets.

Sylvia Diaz found out about the event through a Facebook group for parents with children on the autism spectrum. She brought her 5-year-old son Ian Rivera in hopes of expanding his social circle. Like many other parents, she was pleasantly surprised with the amount of information available.

“We wonder what’s going to happen to him when he’s older, but this put our mind at ease for now at least,” Diaz said.

As the event came to a close, families squeezed in one last lap around the booths. Children giggled mercilessly with their new friends, and parents exchanged phone numbers promising play dates.

“There’s tables for things I’ve never even heard about,” said Brendan Valderas. “It helps you feel you’re not alone.”