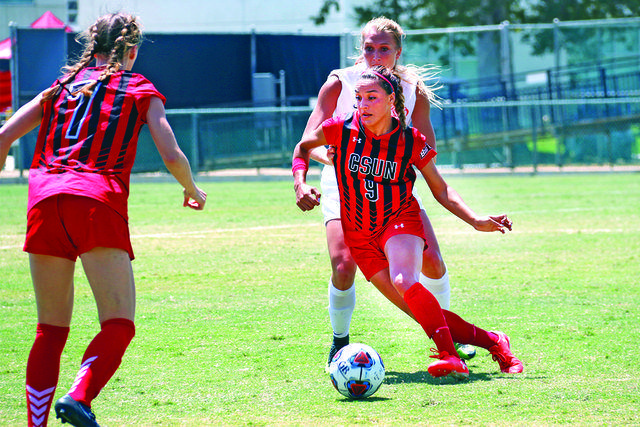 With her goal Cynthia Sanchez #9 has moved into a tie for third all-time in career goals for CSUN Photo credit: Nate Graham

Cynthia Sanchez is another step closer to history notching her 21st career goal, only one away from tying Farryn Townley’s record of 22 (2006-2010), as CSUN women’s soccer defeated Hawai’i 2-1. She is also tied for first with Farryn Townley for most career points in Matador history with 48.

In an exciting match, the Matadors registered a season-high 18 shot attempts with eight of those being on target. Hawai’i was awarded seven corners opposed to five by CSUN, but goalkeeper Jovani McCaskill wouldn’t allow Hawai’i to capitalize as she totaled four-big saves for her team.

The Matadors had many opportunities in the first period to put away UH, but couldn’t capitalize. A foul on Hawai’i gave Ariana Tran a chance to give the Matadors a lead in the ninth minute, but her shot was just high.

CSUN did an excellent job of maintaining possession of the ball in the first half limiting UH’s offense and enabling their chances to score. Taking nine shots in the first period, the Matadors came close, but their shots were either high or just wide.

Tran started the second half the same way she started the game, with a shot at the 48th minute that was saved by Hawaii’s Alexis Mata.

Momentum took a swing in the 53rd minute as Lillie French notched her first goal of the season on the left side on an assist by Sonest Furtado.

However, the lead would be short-lived as CSUN answered right back just six minutes later. Destinney Duron lobed a ball up and Marissa Favela would climb the ladder and head it over the goalie for her fifth goal of the season.

]Sanchez sealed the deal in the 68th minute on a turnover by UH and a quick breakaway where she lobbed the ball over Mata and land it softly on the right side of the net, scoring her fourth goal of the season.

The Matadors will try to extend their winning streak in next game is against UC Irvine as Sanchez will look to cement her place as one of CSUN’s all-time greats.