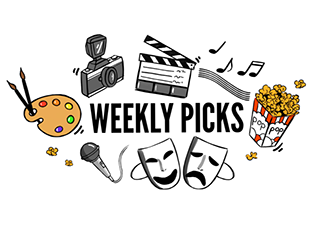 Join Bruce Campbell as he talks about as well as signs copies of his new book, Hail to the Chin: Further Confessions of a B Movie Actor, and hosts this show which takes places at Wizard World conventions. Four contestants will answer trivia questions from horror to superheroes until one person is left standing.

31 and Single: The Musical

This is a musical about a single man who gets a letter from a recently deceased great uncle’s attorney, he could inherit $500,000, but with a catch. He needs to be married by 32 to get the money. It’s written and directed by musician Steven Maggiora and sketch comedy group The Genuine Jerks.

Free, but you must reserve tickets.

You will be right in the middle of a murder investigation as you follow various clues and everyone you see is a suspect and that includes you as well. Purchase your tickets with a CSUN ID at the A.S. Ticket office in the USU. You will be allowed to bring one guest.

Stan Lee’s Los Angeles Comic Con is back for its sixth year where you can find comics, art from artists, vendors, celebrities and all things pop culture. There are different kinds of competitions.

There are various ticket prices that can be purchased here.

Marc Maron discusses his new book, “Waiting for the Punch: Words to Live By from the WTF Podcast,” which is full of transcripts featuring the many people he has talked to on his WTF podcast.

Dogs in costumes. Does more need to be said? You get a ballot at the bar and proceeds will go to the East Valley Animal Shelter.

John Carpenter at the Hollywood Palladium

Go enjoy your Halloween night with one of horror’s greatest directors and soundtrack composers.