How students organized ‘week of action’ to protest Executive Order 1100 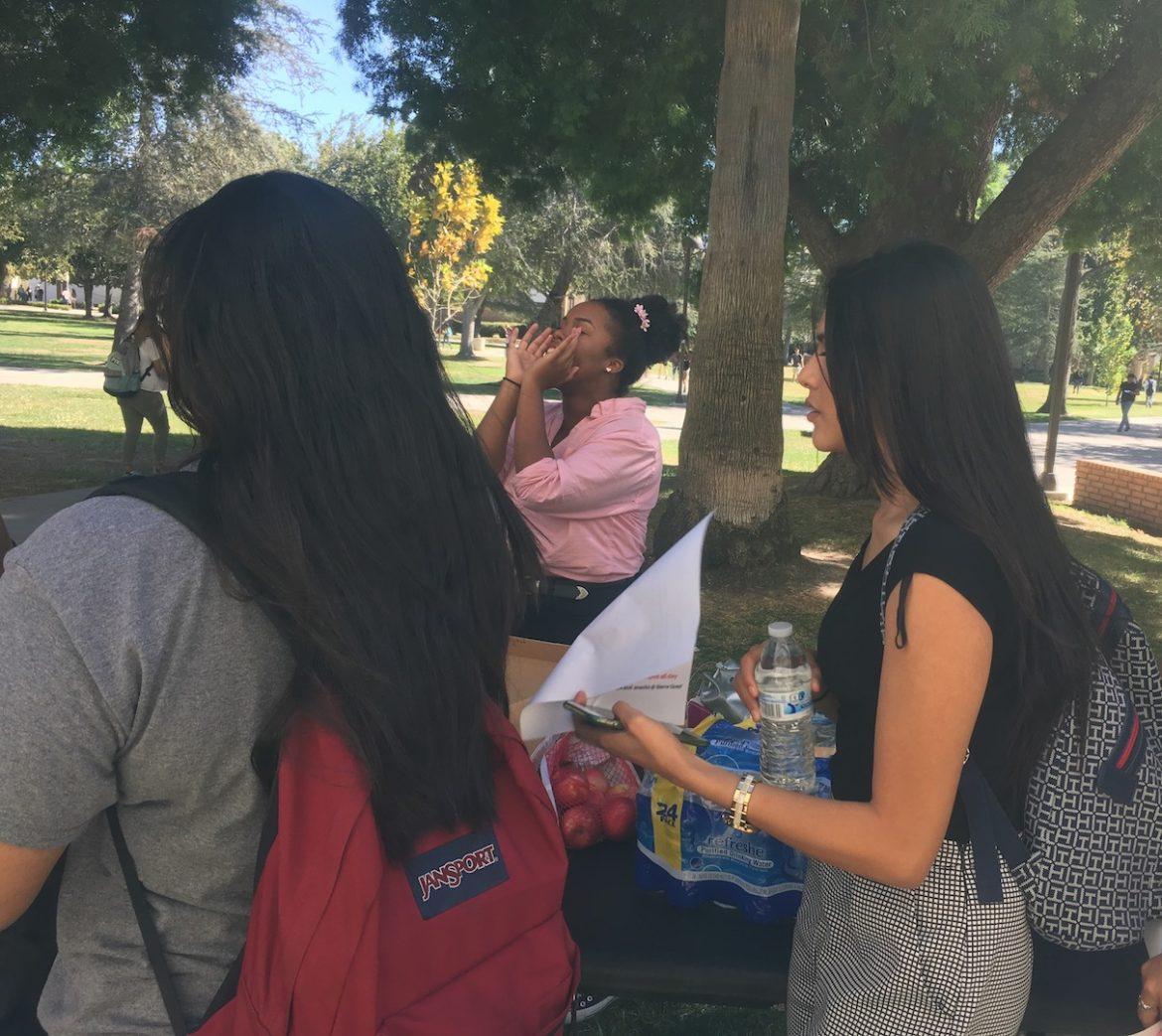 Brittney Harvey of the students of color coalition passed out free drinks and refreshments while encouraging students not to buy from campus on Tuesday.

“Wildfire” is what students nicknamed their sprawling efforts Monday to spread awareness about a week of protests and political actions designed to combat Executive Order 1100, a policy that has led to confusion and dismay across the CSUN campus.

The organizing of the actions came as collective members of the student body who felt it was urgent to oppose the executive order and make it known to the university and CSU chancellor Timothy P. White that this was against their interests.

Students from different factions of campus, with some help from professors, contributed to organizing members from Students of Color Coalition, Black Student Union, MeChA, and different cultural studies departments.

“There’s not only one group,” Kaya Tillery, Black Student Union president said. “It’s just us students who care and don’t want to see our departments disappear. We came to the teach-ins and just planned a week long of events and protests.”

She is referring to the teach-ins that were formed by faculty members and students in the various cultural studies departments. The teach-ins are weekly meetings where discussion and strategizing took place, dating back to the week following the announcement of the executive order.

Further mobilizing efforts were fueled last Tuesday during a Black Student Union general body meeting when a student made brought it up and urged everyone present to take note of the issue.

“About two weeks ago we really got the ball rolling” said Brittney Harvey, a member of Students of Color Coalition. “Kaya played a big part. She brought ideas of the types of actions we can do and really helped decide what was the best way to go forward and spread awareness.”

The actions span from Monday through Thursday, including Tuesday’s boycott of all campus vendors, including dining halls, vending machines, daily parking passes, University Corporation restaurants, and any other campus goods. Students also planned a walkout of classes on Wednesday and a final rally on Thursday.

Tuesday’s boycott, called “evacuate,” was supplemented by the activists providing free food and drinks to students. Activists hoped that in lieu of purchasing food from establishments on campus, students would take free food and stand in solidarity with the symbolic campus boycott.

“As far as the boycott, we’re really making a statement.” Tillery said. “As students, we are more than dollar signs, but our dollar signs do matter, that’s what runs this University.”

Many students involved spent there own money to buy pizzas, sandwiches, cookies and other snacks to hand out to students. Professors also pitched in by bringing food from home and donating money for students to purchase food.

The boycott also served as another method of disseminating information to the student body. Many students unaware of the executive order and its potential impact received flyers and brief presentations as they stopped by the several different stations to pick up some of the free refreshments.

The week of action will conclude with a large student presence at the faculty senate meeting on Thursday, Oct. 26. Many students involved say they plan to speak out during the public forum portion of the meeting. At the last senate meeting, students pleaded with faculty to take action against the order.

“As professors, it’s our job to empower students.” Brian Burkhart, chair of the American Indian Studies program said. “All we can do is help, but they control their own destiny, so it doesn’t surprise me to see them taking charge. One way or another, their voices and presence will impact decisions going forward.”

A major point of contention students and professors have toward the faculty senate was the tabling of the initial vote not to comply with the executive order. Students said they felt jilted after what they initially perceived to be a small victory.

On Sept. 28, the faculty senate voted against fulfilling the executive order signed by Chancellor Timothy P. White. Directly after the resolution was passed, faculty senator Steven Stepanek filed a motion to reconsider, under Robert’s Rules of Order, a widely used parliamentary procedure.

“They used this technicality so the vote could be further discussed, but my colleagues overwhelmingly voted not to comply, so I don’t know what else there is to discuss.” said Dr. Fancisco Tamayo, Chicano Studies professor. “My concern us that this gives time for them to lobby some senators who voted on our side.”

Several students and faculty members believe that the postponing of the vote was to provide time for higher-ups to sway votes of the senators.

“[The motion to reconsider] is legal within Robert’s rule of order, but it was done very dishonestly and it is manipulative to undermine the faculty voice, the student voice and the autonomy of the administrative voices on campus.” Burkhart said.

Though not clearly stated whether or not she is responding to the protests, CSUN President Diane Harrison stated her support of all cultural studies departments in a statement issued Tuesday afternoon.

“CSUN is 100 percent committed to our ethnic, gender, women’s and cultural studies departments and programs, which are points of pride for the university, vital to our institutional character and contributors to student success,” said Harrison.

She also attempted to clarify certain questions surrounding the future of some programs at CSUN.

“Any implementation proposal must retain the requirement that students complete six units of comparative cross cultural studies, ensuring that these courses remain a part of the 48 GE units,” Harrison wrote.

Organizers were encouraged by the response and participation from the student body. Many of them reached out simply by telling friends and posting on social media and in group chats.

Harvey said that the student-wide solidarity made her more hopeful that they will be able to have an impact on the future of cultural studies courses on campus.

*This story has been updated to clarify information regarding the reversal of the faculty senate vote on Sept. 28