Different music genres can help with the exhaustion of studying 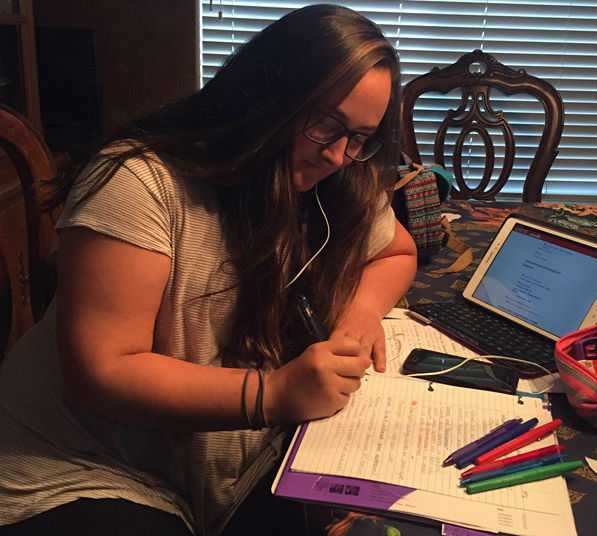 Chiara Perbil spends a night listening to some music while studying for a test. Photo credit: Karin Abcarians

Midterms, finals, quizzes and tests are incredibly stressful, and students frantically try to memorize terms, formulas as well as read their textbooks, but there is something can make the exhaustion of studying a bit more tolerable and that is music.

Music tends to be a nice calming mechanism studying. Students can make a relaxing playlist that has songs that put them in a good mood.

For example, 19-year-old journalism major, Lluvia Beltran, shares her favorite genre of music to listen to.

Beltran thinks listening to music is good while studying, but it really depends on the person. Some people enjoy having music to study with and some may not. For Beltran, it does help with studying. She said her go-to song for studying is a song titled “Te Regalo” which is by Ulices Chaidez.

Chiara Perbil, 23, a speech-language pathology major, listens to a variety of different music, but she recently has been getting into a specific genre.

“…Lately I have been getting more into reggaetón since it has such a different feel to it,” Perbil said. “…I think school in general just makes me stressed.”

Perbil doesn’t always have the same favorite song to listen to while studying, so she tends to change it up a lot.

“I have multiple favorite songs and it changes every once in awhile. Right now my favorite song is ‘It Ain’t Me’ by Kygo and Selena Gomez,” Perbil said.

Perbil also said she has a top three favorite list of music genres she listens to while she wants to study.

“… Sometimes I like music that pumps me up or music that is calming. I would say my top three genres are dance-pop, Latin-pop, and EDM,” Perbil said.

Perbil’s father is in the music industry, so she has always been listening to music.

“I grew up always listening to music since my dad is in the music industry. I listen to almost every genre out there. Any chance I get I will listen to music,” Perbil said.

Perbil gave three songs she listens to when she’s studying for any quiz, final, midterm or test in general and they are “Traicionera” by Sebastián Yatra, “No Promises” by Cheat Codes featuring Demi Lovato and “Feels” by Calvin Harris.