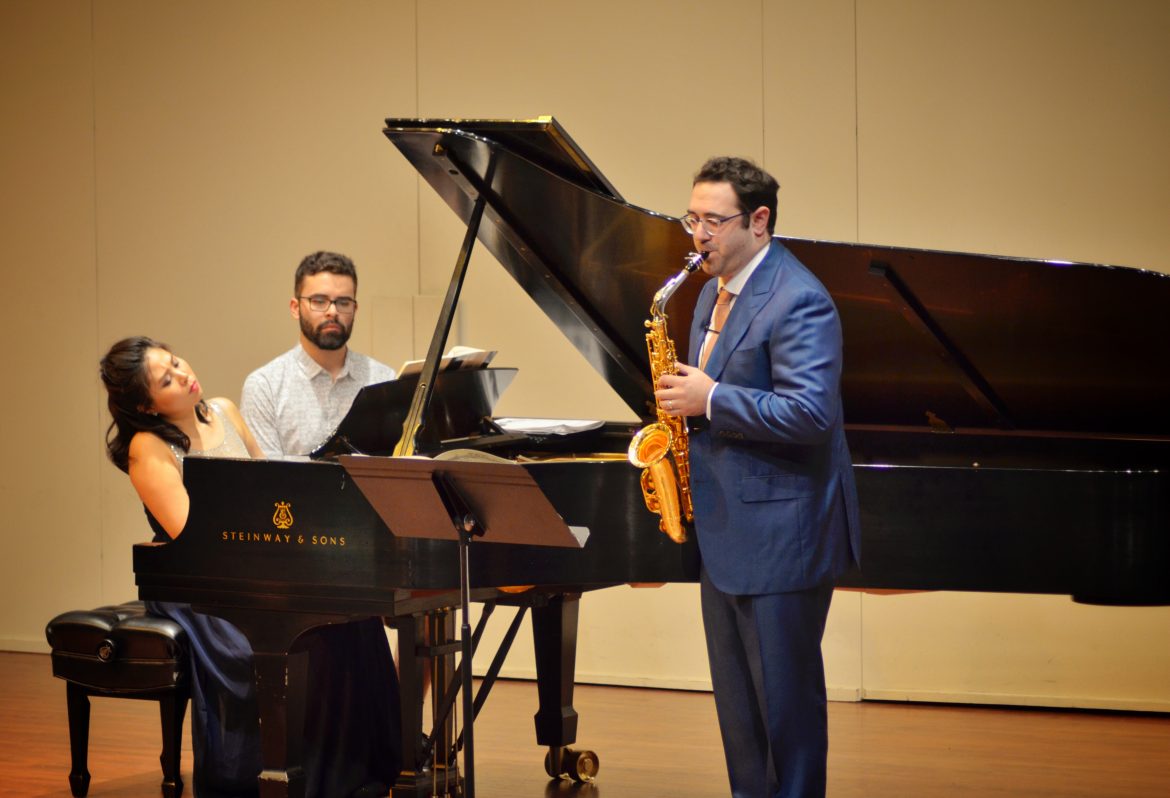 Music filled the air at Cypress Recital Hall on Sunday evening as CSUN’s own faculty member Dr. Benjamin Sorrell took to the stage gracing the audience with renditions played on both alto and soprano saxophones.

Sorrell began the evening with a selection from surrealist Italian composer Giacinto Scelsi, renowned for his groundbreaking compositions built around a single pitch. The immaculate silence preceding the start was gently broken as Sorrell produced notes that seemed to materialize out of nothing and flirt with the limits and range of musical notes.

Commenting on the style of Scelsi, Sorrell noted his fascination with how much a note could be “bent” and still be technically considered the same pitch.

Her music was punctuated by masterful syncopation and expressive gazes directed towards Sorrell as they played through some pieces by Maurice Ravel and Edison Denisov.

Motoyama is highly acclaimed with an undergraduate degree and graduate diploma from Toho Gakuen School of Music in Tokyo, Japan. Motoyama also holds a Master of Music degree in Piano Performance from the University of Southern California.

Sorrell holds multiple awards for excellence in musical performance with interpretations that range in style from baroque to contemporary. His performances have spanned the globe including appearances at Helmut List Halle, Graz, Austria and the Daegu International Contemporary Music Festival in Daegu, South Korea, among others.

Sorrell graduated with honors from New England Conservatory of Music and holds a Doctor of Musical Arts degree from the University of Southern California. He currently instructs students on saxophone at CSUN in addition to serving around 20 private students in the L.A. area.

As the last note was struck, Motoyama raised her arms gently in reverence of the crowd as Sorrell allowed his final expression to fade back into the silence of the hall.

Following the performance, Sorrell invited all his attending guests and friends to a small reception in Cypress Hall.

The recital was one of many performed at the Cypress Recital Hall throughout the year that feature a diverse mix of guest artists as well as faculty performers from CSUN’s music program.

Tickets for future events at Cypress Recital Hall may be purchased at the Associated Students ticket office or at the Cypress ticket on the day of the event.