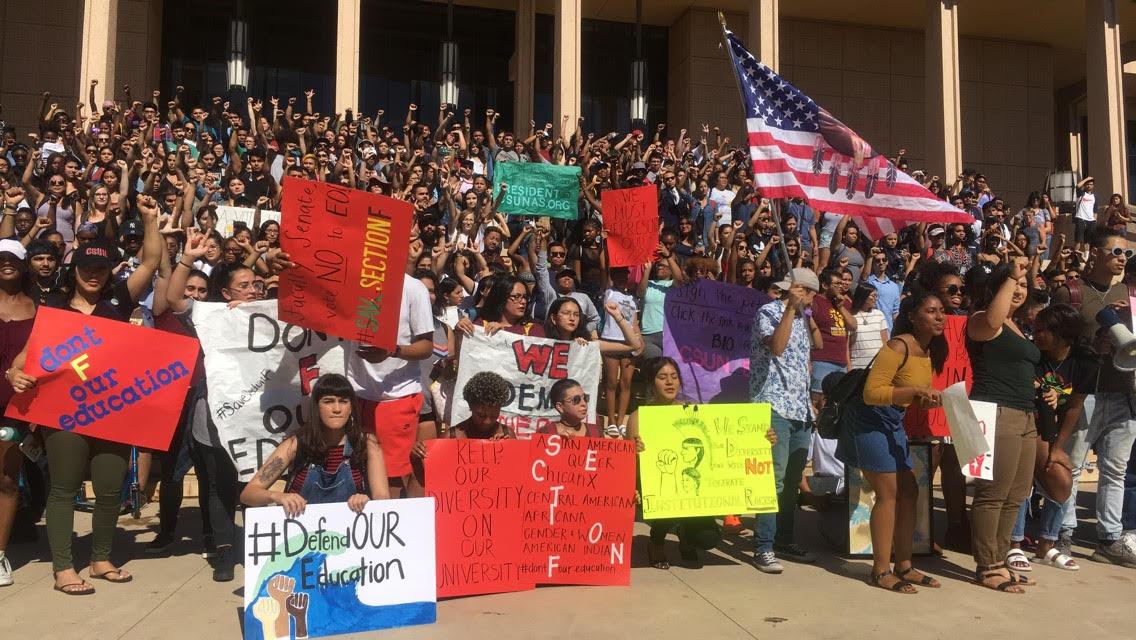 Students concluded the march on the steps in front of the Oviatt Library, where several hundred students joined in a solidarity chant.

CSUN Students and faculty chanted ‘Hey hey Ho Ho, executive order has got to go’ on Wednesday afternoon in a student walk in protest against Executive order 1100.

“Our education is under attack! What do we do? Fight back!” students yelled.

The demonstration began as a walkout and turned into a march across campus from the Oviatt Lawn to the University Student Union, then onto University Hall where a crowd of over a hundred protestors met with Provost Yi Li to address concerns.

Student speaker, Gloria Ortiz gave a speech stating her frustrations with the campuses decision to get ride of the section F requirement that represents majority of the student body.

“I represent my people’s pain, I am Latina. Before I didn’t like speaking Spanish, I was ashamed…society told me that my dreams didn’t match my skin color.”

Yi Li, Ph.D. Provost and Vice President for Academic Affairs thanked students gave a short speech on where he stood with his vote on the executive order.

Students were not satisfied with Provost Li’s remarks about the administrations stance on the order. Many said they were unwilling to accept it because he did not clearly state whether they were on board to sustain the portion of the general education requirement which Executive Order 1100 will eliminate.

“We will not comply with executive order 1100 or compromise,” said Black Student Union president Kaya Tillery, as shared her frustrations with the order and the Provost’s stance–or lack-thereof.

Tillery explained to Provost Yi that she was not concerned with the amount of units that students would have to take if there was a compromise to keep certain classes from section F. But rather, that section F itself was a vital element in the general education requirement that ensured students would recieve adequate instruction in cultural studies.

The walkout is part of an ongoing effort by students to persuade CSUN administration and the CSU Chancellor Timothy P. White to not implement Executive Order 1100.

For more information on the protests, read the rest of our coverage: