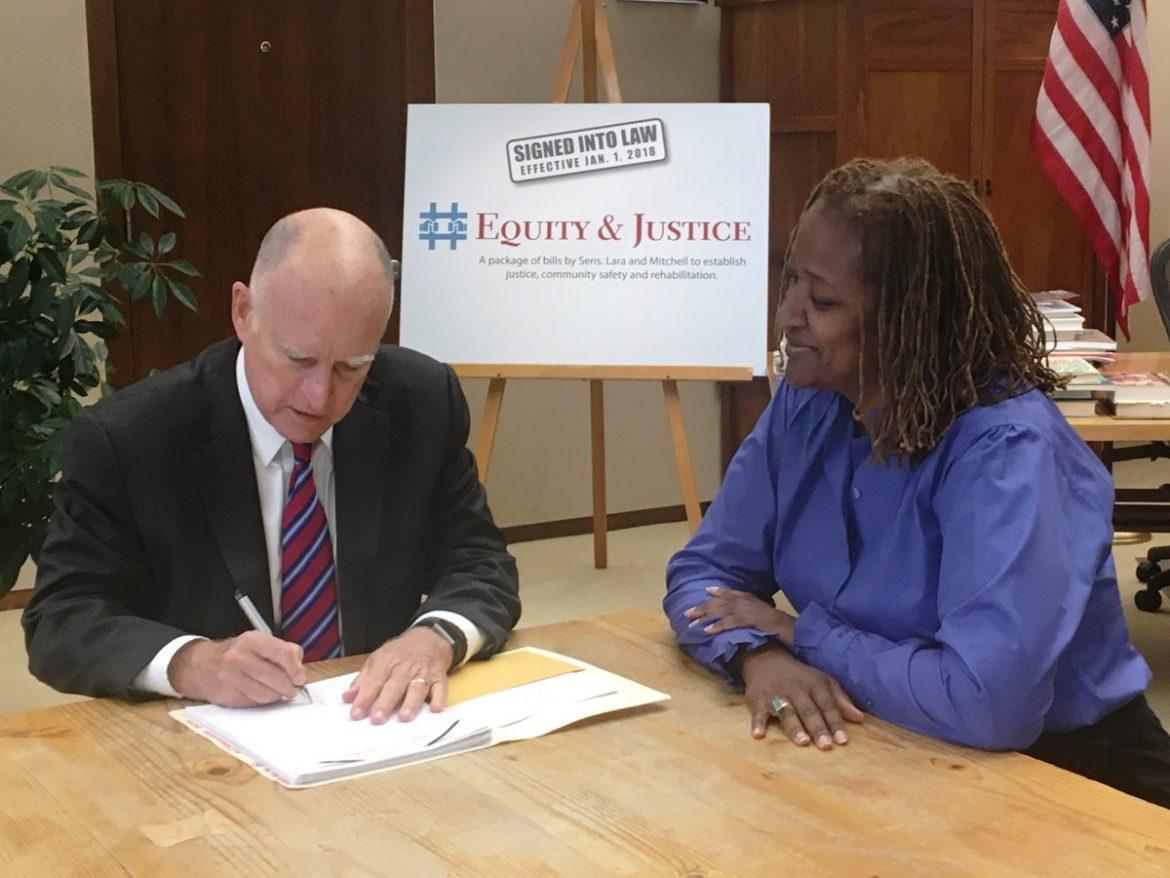 Governor Jerry Brown signed nine bills on Oct. 11 aimed at increasing parole opportunities and easing punishment for people who committed crimes before the age of 23.

The various criminal justice measures, which will take effect on Jan. 1st, 2018, has received immense praise from policymakers and human rights advocates alike. All nine provisions were introduced by California State Senator Holly J. Mitchell as part of her #EquityAndJustice 2017 policy agenda package.

The new laws will tackle issues like ending administrative fees for those in the in juvenile justice system, focusing on drug rehabilitation over punishment, and the sealing of arrest records to remove employment barriers for those arrested but not convicted of a crime.

One of the more significant provisions, SB-394, states that juveniles can no longer be sentenced to life without the possibility of parole. This Californian legislative change is in compliance with the Supreme Court precedent set in the 2016 decision on Montgomery v. Louisiana.

In 1963 Henry Montgomery was originally sentenced to death at 17-years-old when he shot and killed a police officer. After lengthy legal battles and over 50 years in prison, the Supreme Court’s decision required prosecutors to offer a parole hearing or re-sentence to Montgomery and others in similar situations.

Justice Anthony Kennedy wrote in the majority opinion that “prisoners like Montgomery must be given the opportunity to show their crime did not reflect irreparable corruption; and if it did not, their hope for some years of life outside prison walls must be restored.”

The increased pressure for legal reconsideration and compassion for juvenile offenders has gained traction in recent years. Advances in neurological research and brain imagery has allowed researchers to fully examine crucial developmental stages of the brain and relate this to the way courts treat juvenile offenders.

According to research by the Coalition for Juvenile Justice, part of the brain largely responsible for comprehensive reasoning is not fully developed until the age of 25. Since these crucial rational aspects of the brain are not yet present, adolescents fall back on emotional centers when making decisions. This leaves younger people more susceptible to outside influences and more likely to engage in risky behaviors.

“I’m 95% sure that [the nine bills] derived from the same line of thinking. It goes toward capacity to commit crimes in an adult way,” said Dr. Vickie Jensen, Department Chair of Criminology and Justice Studies. “It relates to the underlying question of what in the heck are we doing with people committing crimes in the first place? What is the benefit of punishment versus the benefit of financial, moral and educational rehabilitative benefits of getting them back into society?”

Many of the bills were co-sponsored from advocacy organizations like Human Rights Watch and #cut50 in hopes of paving the way to rehabilitation. These legislative changes create a tangible way out for young people who want to move away from the justice system and into schools and the workforce. Studies have shown that a college education reduces the likelihood of recidivism, yet the educational resources available to juvenile offenders are few and far between.

Gender & Women’s Studies and Chicana/o Studies professor Marta López-Garza is trying to change that. Alongside student advocates and the Civil Discourse & Social Change initiative, López-Garza announced the formation of Our Revolutionary Scholars. The student envisioned and run organization aims to help formerly incarcerated students, and those directly affected by incarceration, navigate the CSUN system.

“We hope to follow the models of other universities of supporting these students through the process. Often people who find themselves in trouble with the law have had few opportunities before,” López-Garza said. “We as a society need to be supportive, whether that be in the university system, or social system, or as neighbors.”

Our Revolutionary Scholars launched this year as a formally recognized Associated Students organization and receives limited financial support. The organization aims to quash misinformation and unwarranted fear surrounding students with criminal records by spreading awareness on campus regarding the realities of formerly incarcerated people.

“I think we need to have compassion for people and understand that people need opportunities,” López-Garza said. “We should help create these programs, not remove them.”