The Cowboys rope up the Matadors 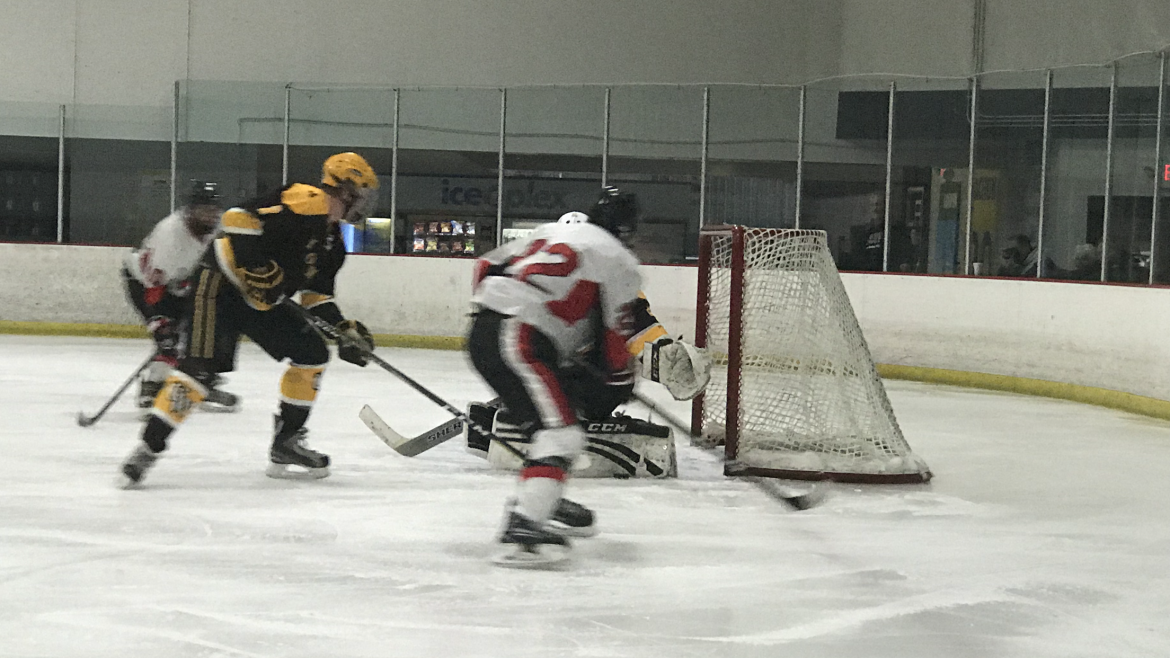 Alex Reints (22) forms a 2 on 1 with John Blascoe (10) deep in the Cowboys’ zone Friday night at the Iceoplex in Simi Valley. Photo credit: Solomon Ladvienka

The Matadors gave an all-out effort against the University of Wyoming, but fell in the final minutes of the game 5-2.

Last season Wyoming hosted the Matadors and CSUN pulled off the two game sweep of the Cowboys.

Vincent Sepe got the consecutive call to defend the net for the Matadors.

“I knew from last practice that JP [Gale] wanted to put me out there, so I was pretty prepared for this game,” Sepe said. “It’s good to get rewarded for playing well. I knew that whoever started tonight was going to be a tough game, and I’m glad that he saw that I could be the one to step up in this tough game.”

Sepe stood tall between the pipes, but his defense broke down. CSUN had numerous opportunities on the power play, but couldn’t find the back of the net. The Matadors were 0-5 with the extra man against Wyoming and gave up multiple short-handed goals during the season.

Eli Berengut got the Matadors on the board midway through the first period goal as the puck was moving between his line mates. John Blascoe battled off numerous defenders deep in the Cowboys’ territory to keep CSUN with the puck possession. Blascoe found an open Alex Reints at the blue line who spotted Berengut mid-slot.

“We were fore-checking, and the puck had hit a couple of my teammates’ sticks,” Berengut said. “The puck bounced out right in front of me, turned around, shot and it went in the back of the net. We continued to pursue our lead, we tried to put another one in before the end of the period.”

The Matadors obtained its momentum and skated into the first intermission up, 1-0.

“Playing with Eli [Berengut] and Reints, they’re natural goal scores,” Blascoe said. “It just seems that I’m in the right place and at the right time with those guys. We’re coming up on twelve games on the season, and at that point, the chemistry should be there. We’ve gotten to that point and I enjoy playing with them. They’re both fast players, and hopefully I can help them out with creating some space and passing them the puck.”

Wyoming tied the game after the Matadors took a penalty just past the midway point of the second.

As the game moved into the third period, dead locked at one apiece, the Matadors needed to kill off a penalty called just as the second period ended. CSUN killed the powerplay opportunity for Wyoming. A turnover deep behind the net of the Matadors allowed the Cowboys an open look in front and the Cowboys cashed in and took the lead, 2-1.

“Some nights, the bounces just don’t go your way,” defenseman Levi Bolls said. “Third period was actually a good period in my opinion. It was just the first and second, it just didn’t seem that we had our feet under us.”

The Matadors fought back. Just under the 10-minute mark of the final frame, captain Alex Reints got his team tied, 2-2. Blascoe intercepted a pass from Wyoming, slid the puck to an awaiting Berengut. Reints joined the party and top-shelved the goalie.

“Finally able to get that breakaway,” Reints said. “Finally able to score after the couple of chances I had in the beginning, get the team going, and get the energy up.”

With the game deadlocked at two, the Matadors were awarded a penalty with six minutes remaining in the game. Shots flew, crisp passes were made, but the Matadors couldn’t find the back of the net. Just as the Cowboys killed off the attack from CSUN, they saw their opportunity and cashed in late in the game. The Matadors trailed 3-2 with under four minutes to go.

The non-existent defense of the Matadors left the back door open and allowed the Cowboys to take the extended the lead, 4-2. An empty-net goal from the Cowboys as the clock expired sealed the win for Wyoming.

The two teams will square off once again tonight. The Matadors hope to avoid the sweep and the puck will drop tonight at Simi Valley’s Iceoplex. Gametime is at 7:45.