Strong religious presence on campus in spite of national decrease 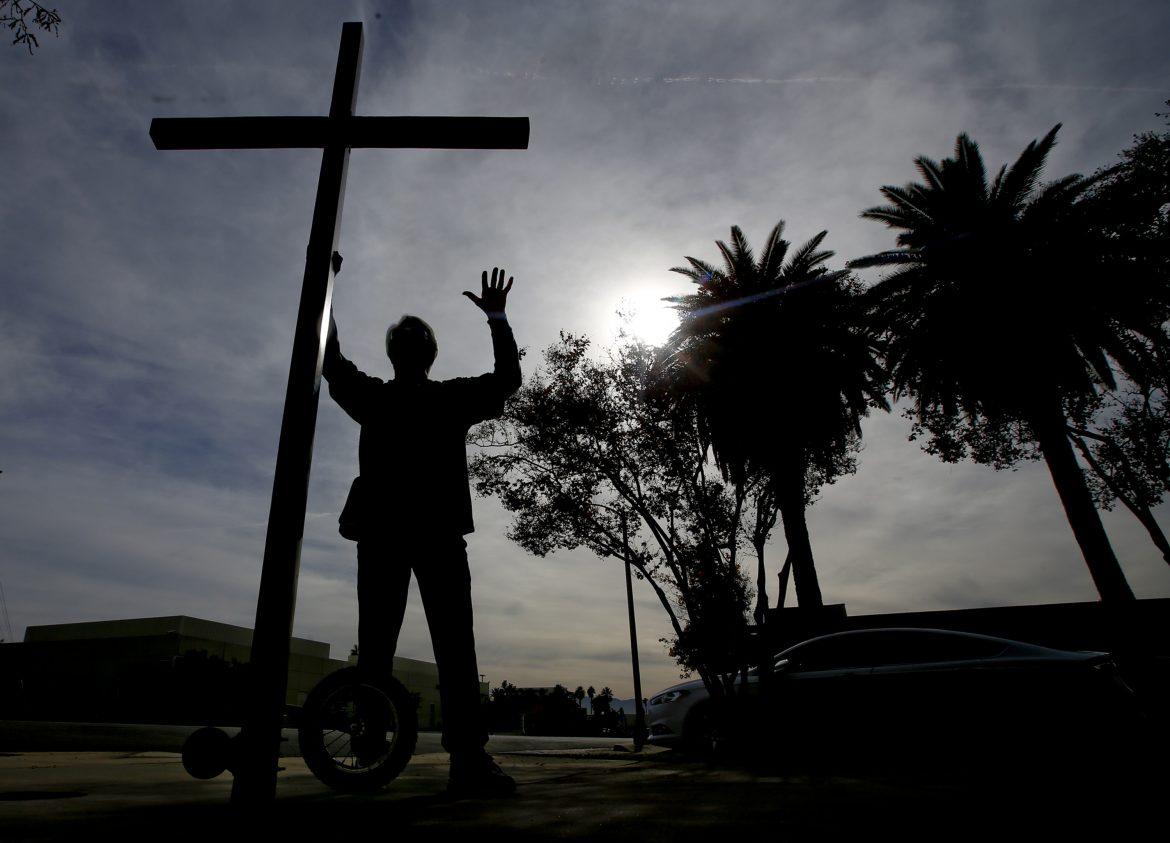 One week after the mass shooting at the Inland Regional Center in San Bernardino, Calif., self-proclaimed street evangelist Tom Alexander prays in front of the San Bernardino Police Department with his 10-foot cross on wheels on Wednesday, Dec. 9, 2015. (Mark Boster/Los Angeles Times/TNS)

Religion has been on a decline in the U.S. in the past decade, and according to the Pew Research Center, the number of Americans who are “absolutely certain” God exists dropped from 71 percent to 63 percent in 2014 and 23 percent are religiously unaffiliated.

Despite these numbers, there are more than a dozen religious clubs and organizations on campus including H.O.P.E. Fellowship, InterVarsity Matador Christian Fellowship (IVMCF), Muslim Students Association (MSA), Buddhists for World Peace among others. They also still have a positive influence on campus.

Computer informational technology major and member of the MSA, Danish Noorani, said CSUN offers a welcoming environment for students of different faiths and religious backgrounds. They come to the campus to pray and to learn about their religious faith, Noorani said.

“I have seen Muslims interacting with the Christian groups, they are always friendly to each other,” Noorani said.

Melissa Montecuollo, who works with IVMCF as lead campus staff at CSUN, said she thinks it is important for all these religious organizations to have space where they can learn about their own religious beliefs.

“There is unity and camaraderie among the different religious groups because we are all searching for some higher truth or a deeper meaning in our lives and I think is even more important to have more than one representation of religious groups,” Montecullo said.

However, they are aware Americans are becoming less religious and part of the reason is the exclusion of some communities and lack of understanding.

Noorani said he thinks some people don’t have enough knowledge about their own religion and tend to forget about it.

“The more knowledge you have about your religion the most likely you’ll follow it,” Noorani said.

Montecuollo, on the other hand, attributed the decline of religion in the U.S. to people not being open-minded enough and lack of tolerance to those who think differently.

“America is highly individualistic as a society and the Christian faith at its roots is not and so I think it tends to thrive cultures where is more communal,” Montecuollo said.

Noorani said it can be challenging to be a religious person in 2017 because of false assumptions and generalizations about her faith.

“There are a lot of people who fall under the name of Christian and are doing bad things in the world and not all the Christians are like that. I don’t want people to assume I am the same way,” Noorani said.

For Muslims it is even more challenging because not many people are educated about the Muslim faith and things are assumed from what is heard in the news, Noorani said. However, if religion wants to survive they will have to adapt and be more inclusive

Noorani said religious people should treat people as a human being first before judging them especially when it comes to the LBGTQ community.

“I know LGBTQ groups who defend Muslims and they are really good people,” Noorani said.

Montecuollo encouraged other religious students to speak up because she thinks Christians aren’t being vocal enough to change their reputation.

“I can totally understand why people would assume that if I hold the name Christian I am going to act a certain way until I actually prove them wrong,” Montecuollo said. “If religion wants to survive is going to have to include everybody.”