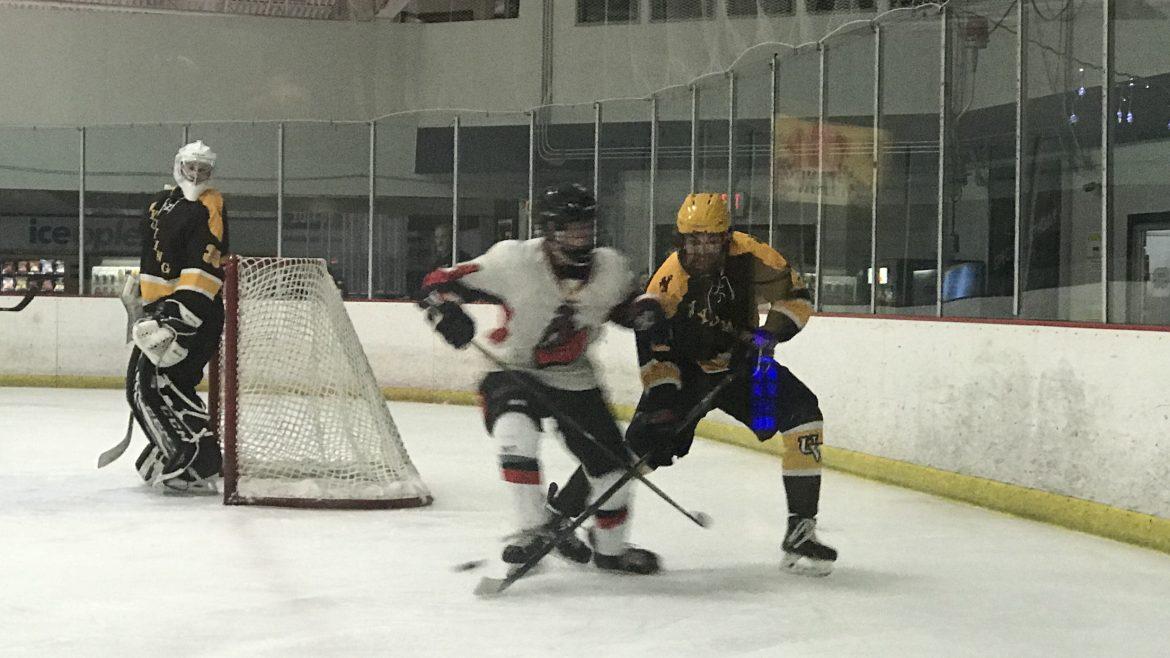 Wyoming defeated the Matadors Saturday night to complete its two-game sweep of CSUN.

Friday night, the Matadors saw their defense breakdown in the final minutes of the game. On Saturday, quick goals from the Cowboys early in the affair saw a rapid exit for goaltender Brandon Kalvoda.

Most notably, coach JP Gale was not on CSUN’s bench. Gale and his wife welcomed the birth of their first child, Aiden John Gale. The boy was born earlier in the day.

Seven minutes into the game after Wyoming opened the scoring affair, CSUN responded. Eli Berengut intercepted a pass near the neutral zone, and found Alex Reints sprinting to the net for a breakaway with the goalie. Reints capitalized the opportunity, and the game was tied, 1-1.

“Just trying to get out there, do what I can, get the puck in the net, and get us on the board,” Reints said. “We were able to bounce back though, and continued that throughout the rest of the game.”

A combined total of 25 penalties were assessed Saturday night. Of the multiple opportunities, CSUN finally got its power play to work. With 6:45 remaining in the first period, defenseman Levi Bolls battled down low in front of the goalie and the puck trickled into the net and CSUN led 2-1.

“Levi [Bolls] is a heavy hitter; we’ve seen that in the past,” Reints said. “So we put him in front of the net to try to give their defenseman a tough job. Sure enough, we were able to find him in front. He kept digging, digging, digging, and eventually got it in and did what he needed to do.”

Back-to-back goals from the Cowboys gave them the 3-2 lead after the first period, and an early exit for Kalvoda. CSUN’s net was dislodged during the third goal for Wyoming and sparked tension from CSUN for the non-call.

Caleb Mead made his collegiate debut in relief of Kalvoda.

With the second period underway, controversial calls were assessed as CSUN’s Garrett Heftye hit the ice. After consistent blows to the back of his head, Heftye grabbed the Cowboy off of him and pushed him to the side to rejoin his teammates on his shift. Penalties were accessed to both players. An illegal two-minute cross check was given to Wyoming and a two-minute holding penalty to Heftye was given to CSUN.

Minute-by-minute, the game became more chippy and the Matadors saw its one-goal deficit become two, and trailed 4-2 going into the final frame.

Penalties and chippy play continued throughout the third period. The Matadors cashed in on a breakaway.

A laser pass from Lesik found the tape of Quentin Abaya, and Abaya broke away from the defense and top-shelved the goalie.

“I was behind the net and I saw Q [Abaya] rolling over next to the boards,” Lesik said. “He called it to me, so I saw an option and I gave it to him.”

“Saw Will [Lesik] chilling behind the net, waiting for someone to get open and move,” Abaya said. “So I took the opportunity to get behind the defense. Will saw me, made that pass perfectly right between the D, right on my tape. I just had to walk it in and finish it. It felt good to help my team climb back and try to get the W.”

A costly penalty to CSUN gave the Cowboys an opportunity to score again, and they did.

Just five minutes remained and CSUN again saw another two goal deficit, trailing 5-3. Yet another penalty was given to CSUN. On defense, instead of Reints icing the puck and killing the penalty, Reints found an open Berengut. A short-handed shot on goal paid off for CSUN, as Berengut cut the lead to one.

“Alex [Reints] got the puck in our defensive zone and I saw an opportunity to start skating up,” Berengut said. “It was a 2 on 1. He got it to me and I just put the puck away. Obviously, we were down, and wanted to score as many goals as we could, get back in the game.”

Following Berengut’s goal, CSUN was called for an interference penalty in the final three minutes of the game. Hyping his teammates up from returning from his shift, Berengut was thrown out of the game for saying, “it’s ok guys. We will come back and score and tie the game.”

The bench erupted after finding out that their top-goal scorer had to leave the game.

As the Matadors needed to score in the final minutes to tie the game, frustration struck. Both teams were involved in a scrum deep in Cowboys’ territory. Amongst those in the fight, Mead left his goal crease on the opposite side of the ice and went to defend his teammates. Mead argued with Wyoming players without getting physical, and earned a thirty-day suspension for his role by leaving the goal crease, cross-ice.

The Cowboys held on for the win 5-4. The line involved in the fight all earned disqualifications and were hit with one-game suspensions.

The Matadors travel to Loyola Marymount University Friday night, before hosting the Lions the following night. Will Lesik, Max Goen, Alex Marbach, Caleb Mead are among those who will not be dressing for the Matadors due to their involvement of the fight.

“After the ending of that game, it was all pretty crazy,” Reints said. “So we’re all pretty hyped for the rest of the year, try to build on that. The game didn’t swing the way that we had wanted it to, but the momentum for sure is going to carry over into LMU and try to get us back to that winning record.”