Hands that do the walking 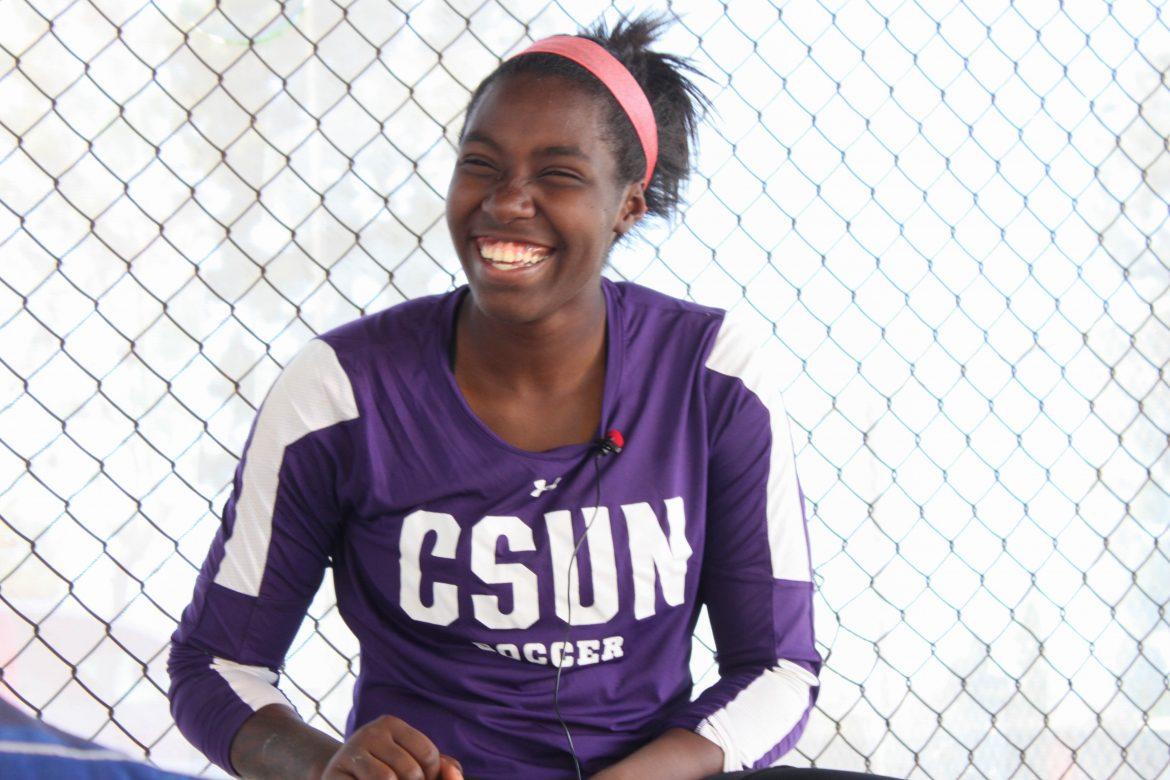 It’s 25 minutes after practice and most of the CSUN women’s soccer players have gone to get treatment for their aching bodies. Drill cones are put away, the mudded up penny jerseys are in bags and the balls have been stored. Well, most of them anyway.

Out in the distance, shots are being blasted left and right. Cynthia Sanchez and Marissa Favela, who are CSUN’s leading scorers, are peppering their goalie with shot after shot. McCaskill, even as a senior, still practices and plays with the same hunger and passion that has led her to become the program’s all-time shutouts leader.

As the shots and crosses ring out with rapid fire and pace, McCaskill is flying and diving. The breaths she takes are deep and she carries a glaring look in her eyes. With an unusual 100 degree heat bearing down on her in October, McCaskill knows that the pressure is on. The one thing she hasn’t achieved which is getting her team into the NCAA tournament.

“I know for our seniors we are refusing to let it be the last game on this field,” McCaskill said. “It’s gonna be a battle regardless of who is in front of us. We are going to go out there and play the best soccer that we know how. We are going to get the results.”

The NCAA isn’t unfamiliar territory for the Matadors who won its lone Big West tournament in 2012. The team has always had talent to play at an elite level but history has shown this team has faltered when the lights were brightest. CSUN was mere minutes from achieving its NCAA aspirations before seeing them crushed by Long Beach State in the conference final last season.

McCaskill knows the value of having a team that has her back. Defensively, CSUN in 2016 had the fifth best shutout percentage in the country. She has elevated her game even further after a season ending knee injury to defender Amber Edemann. Despite the late season loss, the Matadors have won four games and earned seven straight results in that span.

“I have this amazing team in front of me,” McCaskill said. “I wouldn’t be here without them and this amazing coaching staff. Getting yelled at multiple times and all of that is a combination of what drives me and us to be what we are right now.”

McCaskill’s season has been anything but flawless this season. After being named Big West Conference goalkeeper of the year last season, she gave up three goals against both Washington State and in the conference opener against Cal State Fullerton. CSUN coach Keith West said her issues didn’t stem from the lack of effort or talent. Instead McCaskill’s flaws came to the lack of detailed execution.

“Sometimes in life we lose focus on what is important and just missed some details,” West said. “This year the goals did start going in and with a great keeper you get shaky. But like any great player you start working on them and get back to the basics. All I told (McCaskill) that he just needed to get back to what made her great before.”

Now CSUN’s all-time shutouts leader will need to play at the best she has ever been. It’s one thing to win four games in a row and get to the conference tournament. McCaskill will need to do more and that starts by executing when the moment presents itself.

“I’m ready for it, our seniors are ready for it and our freshman are ready” McCaskill said. “It’s a big commitment: to get this Big West Championship and then head off to the NCAA.”