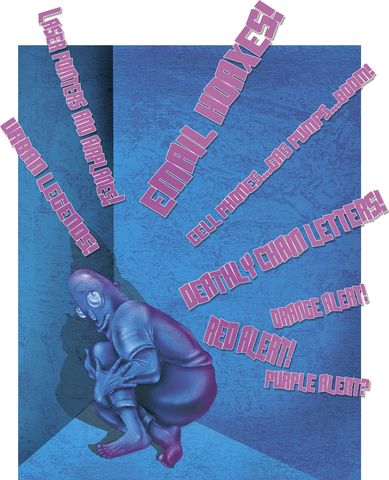 When the Lumière Brothers first showed footage of a train to their audience, the black-and-white footage sent the theatre-goers ducking under their seats to gain shelter from the locomotive barreling towards them. Now audiences crowd to watch the antics of a Nordic god and a gigantic green man and, despite the pristine imagery, the fiction is never questioned. Perhaps we’ve adapted to technology, but fiction is easy; we know what we’re being shown isn’t meant to be true. However, in this world overloaded with clickbait, tabloids and photoshopped magazines, has our ability to distinguish reality from what pretends to be reality really changed at all?

Media literacy is a necessity in the modern age. While it may be tempting to believe everything you read on the internet, to become a productive citizen (and possess an inkling of reason) you must learn to evaluate and analyze the media content thrown at you day by day. A professor recently reminded me of a internet tall-tale that concerned a certain pizza place, human trafficking and politicians. Pizzagate, as this ridiculous fiction came to be known, is just one example of the harm that can be done to real people, such as the owner of the pizzeria; one convinced reader was prompted to bring a gun into the restaurant and demand the girls’ release. There is a profound consequence to public opinion when the internet grows an imagination. We’re the ones that nurture that growth. We’re the ones who can cut it off at it’s source: our own awareness.

We’re all guilty of letting our sense of reason take a back seat and allowing our minds to get caught up in daydreams presented as true. Who doesn’t love a good story? Yet we must teach ourselves and remind others to read actively. Before passing on the message whispered in your ear, attempt to verify if what you’re reading, if what you’re being told, is likely to be true. With the amount of media we are exposed to on a daily basis, that may not always be possible, yet an awareness of whether the narrative woven fits into a logical understanding of the world or if the source is likely to be reliable goes a long way towards cutting lies off at the root.

Media literacy is often discussed in the context of the internet, but it applies also to all other branches of media whether it be film, print or photography. It can vary from spotting a hoax in a photo of a lumbering monster to noticing that the celebrity on the front of a tabloid just looks like she hasn’t had her coffee. It also requires an understanding of the techniques media employs to get your eyes on their content. Films add more flash and bang and sex to get rears in seats. Tabloids put that photo of the saggy-eyed celebrity on the front cover to sell more copies. Even a friend’s post on Facebook may be indicative of them seeking nothing more than that delicious fifteen minutes of fame. Understanding the monetary or social motivation behind media can aid in discerning whether you’re being honestly drawn in by sincere content or bought by glamour and scandal.

The task is daunting. Already, computers have been tossed out of dorm windows, phones have been smashed and at least one reader is using their copy of “The Sundial” to wipe tears of despair from their eyes, but don’t panic!

The power to be a discerning media consumer lies with you. First, don’t trust any website that repeatedly posts about aliens. If they come, you will know. You will not need the internet to tell you about it. Check your sources! Even respected news outlets such as FOX or CBS or NBC have political and ideological slants, but cross-checking the facts helps provide you with varying perspectives on a topic. The financial aspect behind media does not necessarily mean that what is presented is untrue, but failures of logic or gross exaggerations are key indicators towards identifying content that should not be taken at face-value.

We won’t venture into the depths of media literacy that involve being able to create and participate in media. Yet know that with an understanding of media, of its purposes and tactics, there will come the ability to be able to present your ideas, through media, in ways that are logical and will garner respect. With a healthy dose of doubt and analytic thinking, you can be media literate.

Somewhere in this article an urban legend is presented as true, the validity of which is uncertain and substantiated primarily by rumor and myth. Elsewhere, for the sake of example, I exaggerated. I mentioned details I couldn’t possibly know. Did you notice?