Struggling to survive another day 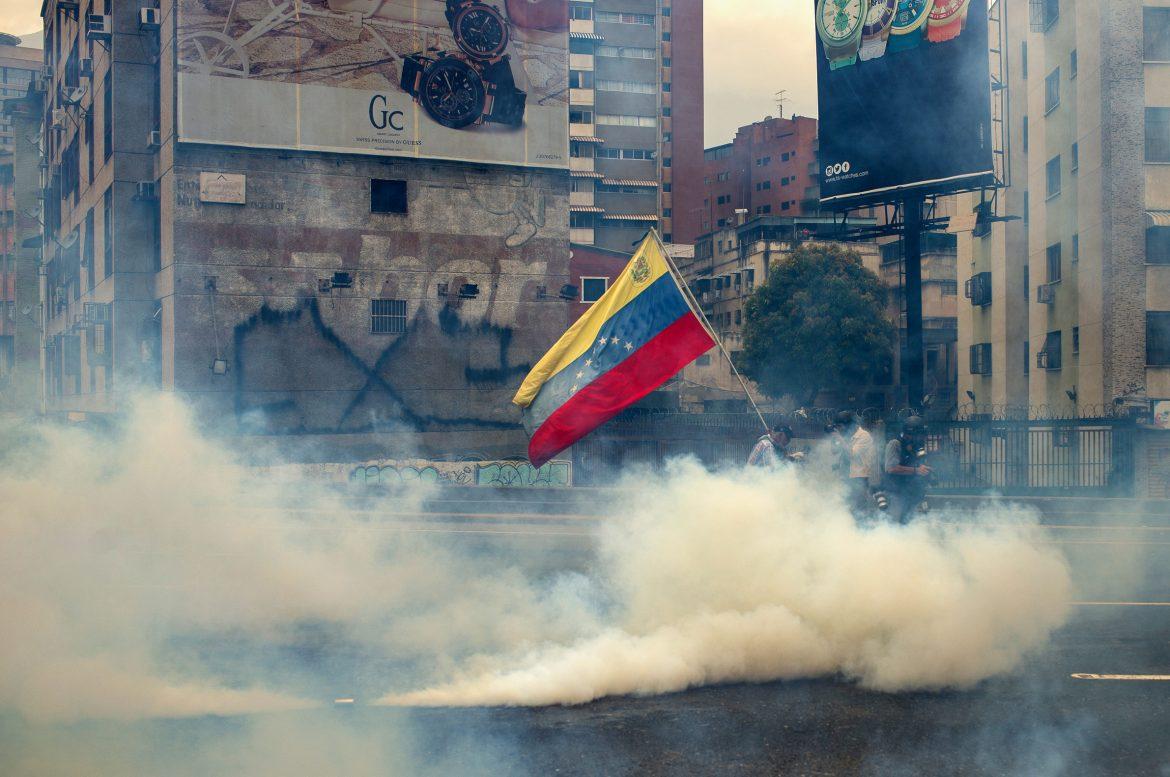 Protesters wearing masks carry the Venezuelan flag amid a tear-gas cloud where mass demonstrations turned into riots in Caracas, Venezuela, on Wednesday, April 19, 2017. The opposition is demanding new elections and holding President Nicolas Maduro responsible for the deep political and economical crisis in the oil-rich country. (Manaure Quintero/DPA/Zuma Press/TNS)

Venezuela is going through a deep humanitarian crisis right now. People are suffering from food and medical shortages. The capital, Caracas, was listed as the most dangerous city in South America with a homicide rate of 119 per 100,000 residents.

In 2001, Venezuela was one of South America’s richest countries due to huge oil reserves and other natural resources. Unfortunately, mismanagement of the currency and plummeting oil prices have brought the country to the brink of economic disaster. Venezuela’s currency, the bolívar, has become nearly worthless during the economic crisis and analysts predict the hyperinflation rates might rise to 2,300 percent next year.

In my 17 years living in Venezuela, I witnessed the decline of my home country. I saw the government shut down dissenting TV stations, big companies become nationalized, small businesses taken away from honest people and much more while the government elites benefited from Venezuelans’ suffering.

Despite all that, middle-class people could have a decent life if they worked hard for it but since the death of Hugo Chávez, who was also known for his anti-imperialistic rhetoric and ties to Fidel Castro’s regime, things have gotten worse. People thought things would change for the better, but they were wrong. Chavez’s successor, Nicolás Maduro, has done everything he can to undermine Venezuela’s remaining democratic institutions, tossing his political opponents into prison.

Earlier this year, my grandfather underwent prostate surgery to address a health issue, but he couldn’t find the medicine he needed for his treatment. Fortunately for my family, they reached out to someone living in our neighbor country, Colombia, to send the medicine for him but not everyone has that luxury. Most people just die hospital beds due to the lack of medical equipment and medicine.

Venezuelans are starving and desperate for food, causing them to hunt for dogs and other animals to eat. Venezuelans lose an average of 19lb in weight due to nationwide food shortages.

Animals are not exempt to the crisis either. Some people are leaving their pets on the street because they can’t afford or find any food for them. Local businesses suffer as well; a few months ago my dad’s pharmacy was looted by government sympathizers and he was forced to shut it down.

Most of my friends either fled the country or are struggling to survive. With few young people left there, the ones remaining are older people who don’t have the resources to leave. My family has been a victim of extortion and robbed at gunpoint multiple times. Those incidents could have ended up with them being shot or kidnapped as has happened to other people close to our family.

This has been a very difficult situation for me on a personal level. While I am enjoining the benefits of living in a first world country, my family and other people in my home country are suffering. Despite their best efforts, things keep getting worse. It is something hard to reconcile. I feel people living in other places don’t realize how bad things are in Venezuela; they desperately need help from the international community.

My family has made a huge sacrifice to keep me here and I am grateful for that because a lot of my friends who fled the country are having a hard time. I don’t expect things to get better anytime soon unless the current regime is overthrown by the people, but this is unlikely since Maduro’s regime controls the military. As of today, I have a sense of despair and hopelessness for the future of my country.