Author shares her life as a Jewish girl in Shanghai 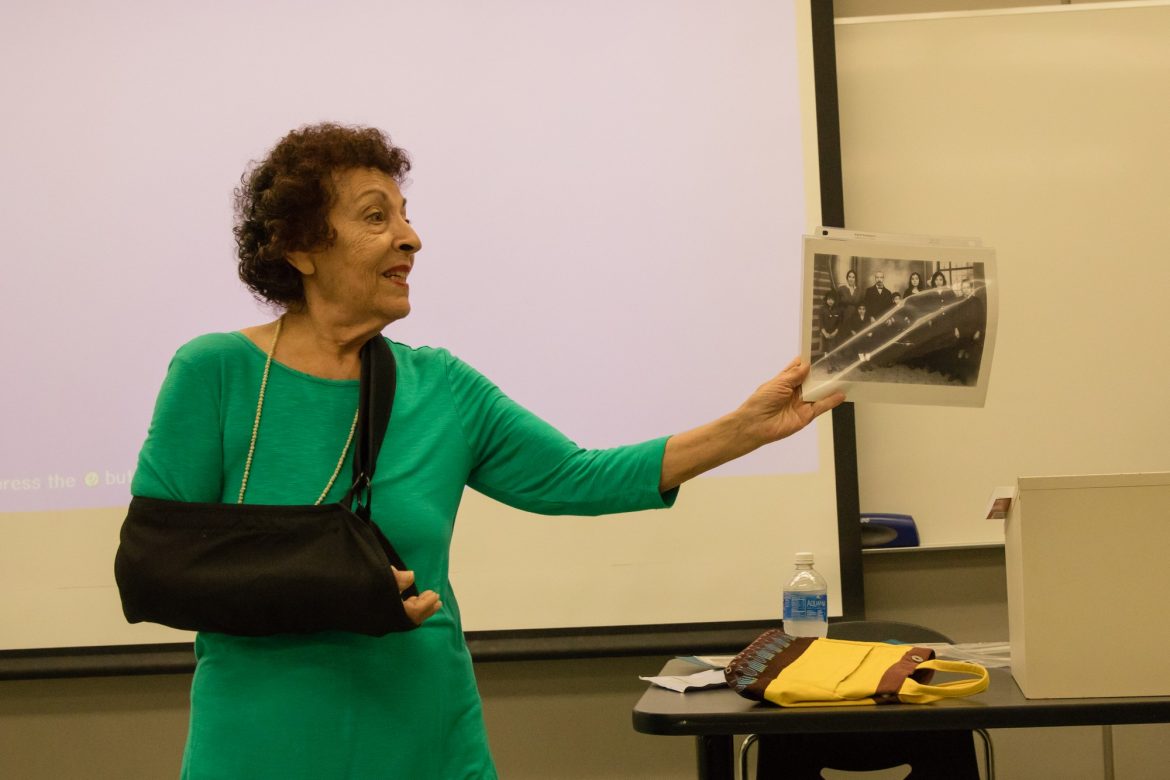 Esther Shifren passes a photo of her Jewish family who lived in China for a century around the classroom. Photo credit: Max Sullivan

Esther Shifren lived the opulent life of a young Jewish girl. Her father owned six horses and her home contained 24 bedrooms. That abruptly ended during World War II when a foreign army rounded up her community.

Shifren shared her story of growing up as a fifth generation Jew in Shanghai, China to an audience of a “Women in the Jewish Experience” class in Jerome Richfield Hall Wednesday morning.

Shifren’s great great grandfather shipped silk, cotton, and opium to China from India in the 1800s. He moved to Shanghai in 1841 when it became an international enclave with no visa requirements as part of China’s concessions after being defeated in the First Opium War by Great Britain and sparked China’s century of humiliation.

“My father always told me that we were the first Jewish family in Shanghai in that era,” Shifren told the audience. “In the 8th and 9th century there were Jews from Persia who traveled on the Silk Route…and Kaifeng became a thriving Jewish center and the Chinese welcomed the Jewish people who eventually assimilated and there are still Jews in Kaifeng today.”

Finance major Nicholas Dilando said he enjoyed her diverse story and how Jewish culture has been influenced in Shanghai.

“It gives insight to different culture and different areas that you wouldn’t necessarily expect or see,” Dilando said. “Humanities, in general, are so interesting and it gives us a way to be well-rounded and experience different cultures.”

A century later, China’s humiliation climaxed when Japan occupied the country in the Second Sino-Japanese War that began in 1937. When Japan bombed Pearl Harbor on Dec. 7, 1941, the Japanese war expanded to include the United States and the allied powers in Europe.

The day after Pearl Harbor the Japanese came into the colonized area of Shanghai and began to send citizens of allied countries into internment camps, according to Shifren.

“There were only three Jewish families in my [internment] camp,” Shifren said. “They had orders to kill us because we were British.”

Shifren also spoke about colonial life in Shanghai and bustling alleyways filled with shoemakers and bucket showers. She moved to Israel in 1951 and then to South Africa in 1956 where she lived for 26 years before coming to the United States.

Lecturer Elaine Goodfriend, who teaches courses in history, Jewish studies, and religious studies said she wanted to bring somebody to the class who provided diversity in the Jewish historical experience.

Shifren wrote an autobiography that includes her time in Shanghai and in the Japanese internment camp titled “Hiding in a Cave of Trunks.”