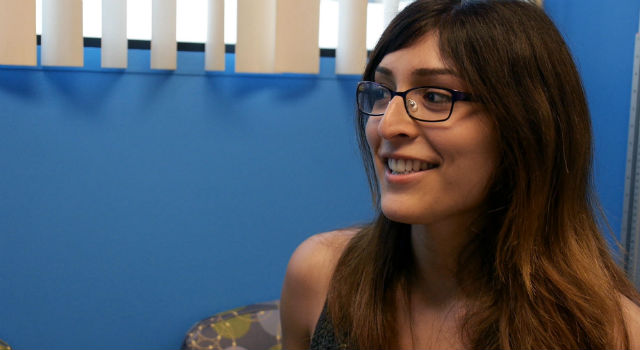 “How does it feel when your mom prays every day for you to be someone else?”

“Becoming Johanna” chronicles the story of Johanna Clearwater, a 16-year-old transgender Latina and the struggles she faces in her life.

The director, Jonathan Skurnik, is a documentary producer, director and cinematographer and has garnered plenty of support for his films. Skurnik has had five films on PBS and Europeans Television and has had his films screened in various places such as Museum of Modern Art, Lincoln Center and in New York City in art galleries as well as film festivals.

He is the chair of the steering committee of New Day Films and founded the Workfare Media Initiative, The Youth and Gender Media Project and The Cante Sica Foundation. Skurnik teaches workshops and master classes in theory and production at Chapman University and the New York Film Academy.

The acclaimed director spoke to The Sundial about his personal work, the Youth & Media Gender Project and his work with Johanna.

Your work is incredibly diverse. You’ve worked on documentaries about people who are gender non-conforming, musicians who make music from instruments made of ice, people who stutter and more. What’s your thought process when picking a documentary/film to make?

I only make films about topics and issues that interest me, and all of my films have a personal connection in some way. For example, the “Ice Music” documentary is about artists who are searching for an expression that is both original and deeply resonant with their own sense of beauty and emotional truth. As an artist myself, I am seeking the same things as I make my visual art (which is a completely different practice from my filmmaking). “Spit It Out,” the film about stuttering, tells the story of a man coming to terms with his disturbing and traumatic relationship with his father, which was something I was doing at the time myself. Sometimes, I don’t discover the connection until after working on a film for a while, but it’s always there.

With my films about trans and gender-expansive youth, it wasn’t until audiences started to ask me about why I, as a straight, cis-gender man was making films on the topic, that I had to dig deep and discover my deep connection to the topic. As a boy, I was gender-expansive and was terribly bullied for it, so much so that I finally gave up my “girl toys” and other behaviors traditionally associated with the feminine.

At the Youth and Gender Media Project, we believe all young people should be encouraged to be themselves, free from the fear of bullying or discouragement. Our mission is to utilize our series of short films and curricula about transgender and gender-expansive young people, their parents and their schools to foster inclusive communities for all young people, regardless of their gender identity or expression. Our ultimate vision is to create a world where all people are free to express themselves fully and are celebrated for who they really are.

We’ve seen a lot of tragic stories about transgender youth who have taken their lives because of being bullied or not accepted by family or friends. Why do you think it’s important to create films and documentaries like “Becoming Johanna” to showcase LGBTQ youth and their struggles to live the life they want?

Visual storytelling, when done well, almost always touches on some universal theme that any human can relate to. In “Becoming Johanna,” that theme is connection and love. Johanna struggles to have a loving connection with her own mother, but is unsuccessful. However, she finds the love she needs and craves with her foster family and her school principal, and as a result is able to succeed in life. This craving for love from a parent or parental figure is something everyone has experienced, and so even audiences who are resistant to or just ignorant of the lives and challenges trans youth face will be able to connect with Johanna’s story. For this reason, films like “Becoming Johanna,” the other films in The Youth and Gender Media Project, and the many other excellent films and TV shows coming out about the lives of trans people are going a long way towards creating a more tolerant and inclusive society.

What is “Becoming Johanna” about?

How does it feel when your mom prays every day for you to be someone else? That’s the struggle of Johanna, a 16-year-old transgender Latina faces. At first, her mom thinks she’s confused or joking, but as Johanna’s transformation continues, her mom simply can’t handle the fact that her son is Becoming Johanna.

Johanna’s mom tries therapists and a mental hospital in her quest to “fix” her daughter’s gender identity. While she was born a boy, Johanna is a young woman on the inside and nothing but living a lie can change that.

“Becoming Johanna” is a compelling story that follows the struggles transgender teens face every day. In the end, Johanna refuses to let her mother’s rejection define her life and she continues the journey toward becoming comfortable in her own skin. Johanna’s story is as beautiful as she is, and will leave you hopeful that we can build communities that accept all of our children just the way they are.

When did you first meet Johanna?

I was volunteering at Children’s Hospital’s trans youth unit and asked the director of the support group, Bamby Salcedo, who would be a good person in her group to work with on a film, and Bamby introduced me to Johanna.

Did you want to create the documentary or did Johanna come to you with the idea to document her life?

I had already been planning to make a documentary and was looking for some individuals with compelling stories that were unfolding in ways that would be dramatic and unexpected. So after Bamby introduced me to Johanna and several other young people in the support group, I began filming and trying to raise money for the project. Over time, Johanna’s story seemed to be the most compelling, and we ended up filming together on and off over a five year period.

Do you think Johanna’s story should be told in schools?

I’m showing the film in schools all over the country, so yes, I do think it should be told there.

What are you currently working on that we can look forward to in the future?

My work these days involves getting the films of the Youth and Gender Media Project to the people who need them. I have been fortunate enough to receive a grant that allowed me to hire a part-time impact producer, who’s working with non-profits all over the country to screen the films, followed by discussions and activities that promote inclusion. Johanna and I have also been traveling with the film to screen it together in places like Seattle, Charleston, SC and all over SoCal.