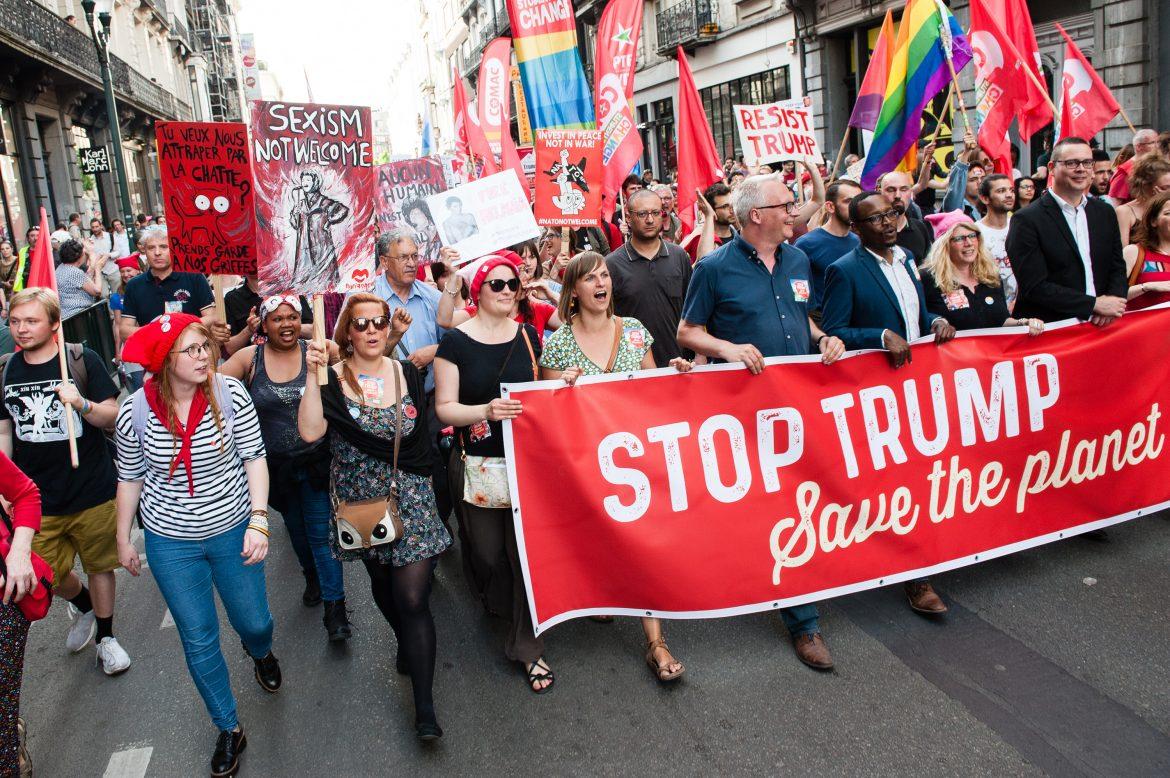 Demonstrators gather to attend a protest against U.S. President Donald Trump ahead of the meeting of NATO (North Atlantic Treaty Organization) heads of state and government on May 24, 2017 in Brussels, Belgium. (Romy Arroyo Fernandez/NurPhoto/Sipa USA/TNS)

At the annual United Nations climate conference, which took place in Bonn, Germany, Nov. 6 to Nov. 13, Syria announced its plan to sign the Paris climate accord, leaving the U.S. the only country opposed to the deal.

The Paris climate accord was signed by 195 countries in the French capital in 2015 in an effort to unite the nations of the world and cut global carbon emissions. The agreement was to fight climate change by keeping global temperature rises below 2 degrees Celsius and limit the amount of greenhouse gases emitted by human activity. Of the 195 that signed on, 169 have since ratified the accord.

“It’s embarrassing,” said Tyler Hughes, political science professor at CSUN. “This is the biggest problem facing our planet right now, it’s embarrassing, not only for someone who cares about climate policy but on the world-wide stage it makes us look [bad].”

According to the United Nations World Meteorological Organization, carbon dioxide levels in the atmosphere surged at a record-breaking speed in 2016 and the WMO warned that they are at a record high — the highest level recorded in 800,000 years. As the world’s second-largest emitter of greenhouse gases with 17.89 percent of global emissions, second only to China, the U.S. leaving the accord brings the question whether realization of its goal will be possible.

Because of the legal structure of the climate accord, the U.S. technically cannot exit the accord until 2020, by the next presidential election, however President Donald Trump began the process of withdrawing from the agreement earlier this year.

“I think it is important to know that we are technically still part of the agreement and it’s a non-binding agreement, there aren’t any stringent penalties imposed, it is more about sort of being in the court of public opinion,” Hughes said. “There are a lot of states and cities banding together to be part of the climate accord including California, [so] the U.S. is still doing good things, even if our national government doesn’t seem dedicated to it.”

California Gov. Jerry Brown has repeatedly voiced his opinion on the current administration’s stance on climate change. En route to the climate conference in Bonn, Gov. Brown addressed the European Union in Brussels and the State Parliament Baden-Württemberg in Stuttgart on clean energy collaboration.

In the fight against climate change, Brown has been hailed in German media as the “Anti-Trump” for letting the state of California lead the way in effort to keep the United States engaged in the agreement’s commitment to cut greenhouse emissions.

“California is a major contributor to the American economy, [and] we are a major polluter, so I respect Gov. Brown’s thoughts about wanting to better regulate our pollution and emission levels,” De Maio said. “From a practical and personal perspective I am proud that he is championing this cause, but I also worry that [we are] setting a new precedent for states acting on their own.”

President Trump has expressed doubt about climate change and has argued for leaving the climate accord in 2020, claiming that it is bad for U.S. businesses, stating that “the cost to the economy would be close to $3 trillion in lost GDP.” However, Factcheck.org states that was an estimate from a report for a business-funded group.

“All you have to do is to look at the California economy to see an example of where it does work, our economy is thriving,” Hughes said. “We have pretty strong regulations on the emission of CO2 and we’re not scaring businesses away, if anything our economy has gotten stronger, California is an excellent case study to counter act what I think is an incorrect assumption made by the President”

During his statement where he announced a withdrawal from the accord, Trump said that the agreement was “unfair” to the U.S. coal industry. Hughes, who has previously worked in a coal mine, says the coal industry is not failing because of politics, but because of simple economics:

“There are cheaper forms of energy that people want to use and have a higher demand for than coal, it’s an economic problem, it’s not a government problem,” Hughes said. “To try to bail out an industry like that I think is a wasteful, ineffective policy, and when you add the climate change part of it, it makes no sense at all.”

Though the U.S. cannot formally withdraw from the Paris climate agreement until 2020, a pavilion by the country was for the first time not set up at this year’s UN summit, according to German news agency Deutsche Welle. However, a group of U.S. governors, mayors and business leaders called We Are Still In, led by Gov. Brown and former New York Mayor Michael Bloomberg, did set up a “U.S. Climate Action Pavilion” at the venue in Bonn.

“I would say that all hope is not lost, good things are happening, it’s unfortunate that our government isn’t doing something more, that our federal government is denying that this problem even exists,” said Hughes. “It [sends] a clear signal to future generations that this administration is not willing to grapple with problems that are going to affect us 30 or 40 years down the road, it sends a dangerous signal that we should be focusing on other things when we have the largest problem facing the world in front of us and we are unwilling to tackle it.”