Q&A with Yissy Garcia, a leader in the new generation of Cuban artists 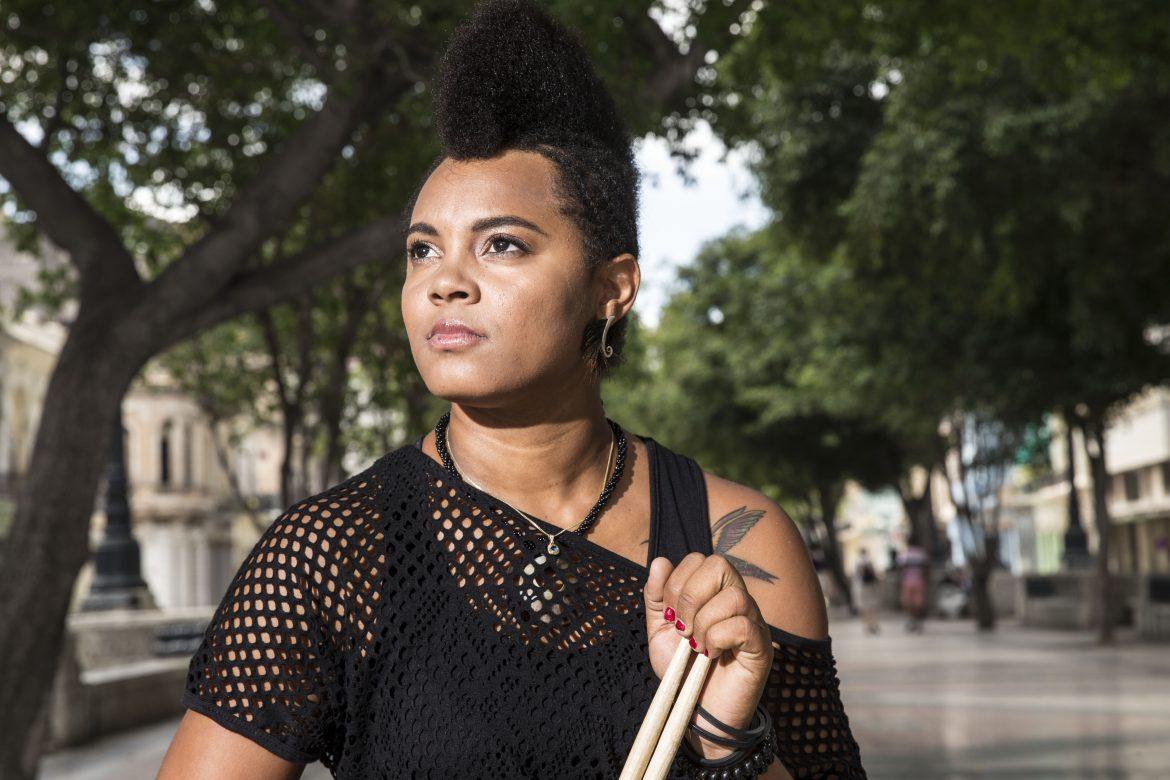 Yissy Garcia, born in the infamous town of Cayo Hueso, is a drummer of her group bandancha. Photo Credit: Courtesy of Yissy Garcia

Excited the take the stages of three different American cities, Cuban artist Yissy Garcia and her ensemble of musicians—bandancha—will be performing in L.A. at the Annenberg Space of Photography on Thursday, Nov. 30th.

Currently, the Annenberg museum is hosting an exhibition under the name “Cuba Is” which showcases the new wave of fine artistry surfacing in that country.

As a leader of a new generation of artists, Garcia will present live shows from their latest album: “Ultima Noticia.” The album is characterized by the fusion of electronic elements (such as DJ scratching) with classic jazz. Although Garcia is the frontman of the group, instead of standing in front of the microphone, she sits behind a drum set leading the group with the rhythm.

Her interest in the drums began in her hometown of Cayo Hueso and the influence of her father Bernardo Garcia—who is also a drummer. Since she was a little kid she knew she wanted to be a percussionist.

Unfortunately, the group has faced multiple obstacles in their endeavor to distribute their music. Cuba is known for its limited internet accessibility which has hindered their ability to expand their music nationally. One of the methods the group has used has been to put their music in “El Paquete Semanal,” a collection of digital material in the underground market that serves as a substitute for the internet used in most countries.

The Sundial spoke with Garcia about her upcoming presentation in the U.S., her life in her hometown of Cayo Hueso, and her musical influences.

What can you tell me about your latest album “Nueva Noticia?”

García: It’s our latest album. I recorded it in 2015, edited in 2016, and licensed it with a record company in 2017. The album took many years to complete and it started with a crowdfunding campaign—one of the few from Cuba. We took three years preparing before we entered the studio again. I had guests in the album, like Kelvis Ochoa and Yusa.

What was your life growing up in Cayo Hueso?

Garcia: In my house, there was always a musical ambience. When I was a little kid I always stayed close to the musicians at religious parties and I tried to repeat the rhythms they made. I knew I was going to be a musician ever since I was little. I loved going to my dad’s rehearsals and every time he took a break I sat behind the drum set and tried to play something.

Garcia: I am really happy with my hometown. I always say it’s a musical town where big artists were born. I remember a lot of moments in which my friends would hang out in the park in front of my house and would play a terrific rumba with tin cans, cajones, and spoons. We would make a party out of nothing. A lot of people would come to sing and dance. All of that has influenced my professional life. I have the rumba in my veins. I don’t know how to dance it but I love playing it as well as introducing la clave to different genres.

What did you learn while playing with a women-only orchestra during your mandatory service to the government?

Garcia: Anacanoa was my first Cuban music school. I learned how to read music sheets and for the first time I played drums and the timbal at the same time. I had never been in a band with women only, so it was all a new experience.

Have the limitations of internet usage complicated your career? How is your music distributed?

Garcia: Distribution is always a challenge, but those challenges force us to come up with better solutions. The strict limited access doesn’t let us use digital platforms. It’s also difficult to maintain ourselves well informed over what is happening in the music industry. It’s like playing with a disadvantage, but you have to play anyway, with more effort and dedication, but you have to play. Apart from the Paquete Semanal our music is distributed in flash memories and hard disks.

Who are your favorite jazz players?

What can the L.A. audience expect from the show?

Garcia: Music with a lot of energy and Cuban flavor.