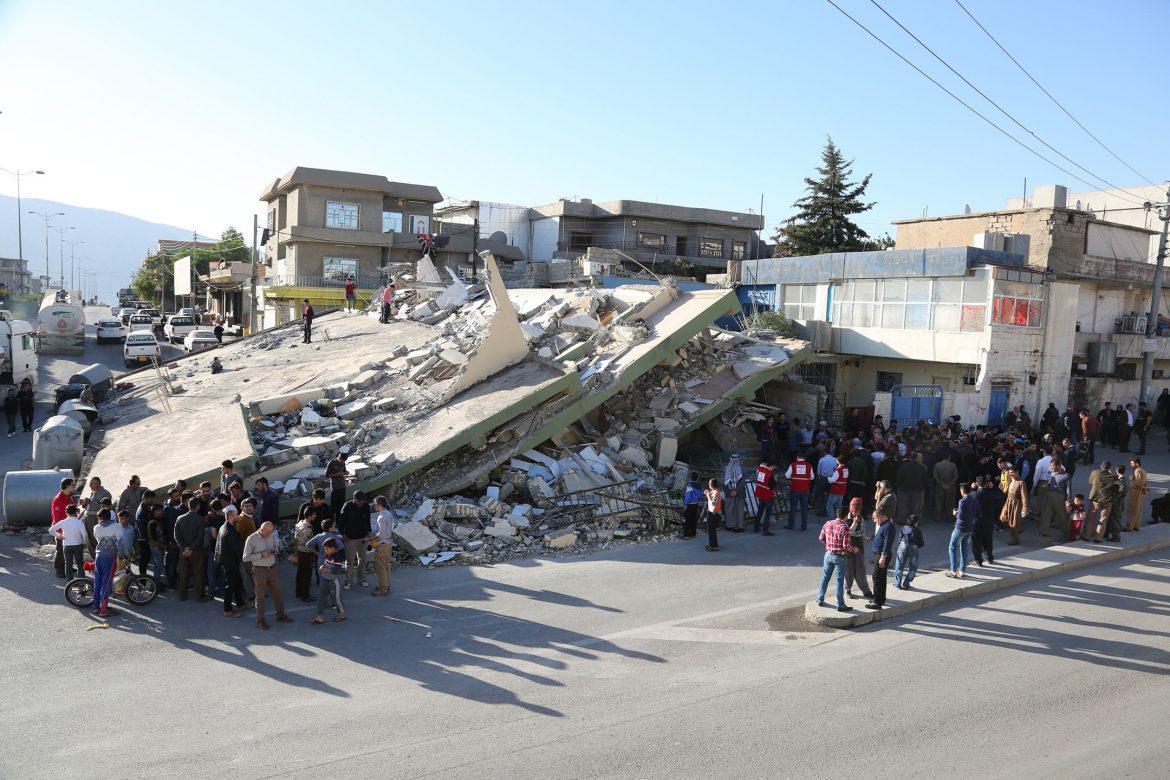 Residents and rescue workers gather near a collapsed building in the town of Darbandikhan, Sulaimaniyah province, in northern Iraq, on Tuesday, Nov. 14, 2017. An earthquake struck the area along the northern border between Iran and Iraq on Sunday, leaving at least 454 people dead and more than 7,800 others injured. (Khalil Dawood/Xinhua/Sipa USA/TNS)

Iranians were devastated from an earthquake that occurred on Nov. 13, which caused massive damage felt in multiple countries and has left the region devastated.

The earthquake which was a magnitude 7.3 and was located at the Iran-Iraq border in the town of Kermanshah which is the largest Kurdish speaking city in Iran, according to Iran news.

CSUN Geologist Doug Yule describes the location of the earthquake and what it meant scientifically.

“It’s in the Zagros mountain which is a belt of prison zone and between two tectonics plates. It’s a result of two plates concluding. But they are both continental plate and one plate has a hard time going under the other and stretches till the Himalayan zone,” Yule said. “The depth was 25 kilograms deep and 18 miles [far], the waves traveled for the earthquake.”

Yule explains that future aftershocks will occur in that region where the earthquake occurred.

“There will be aftershocks and the magnitude 7.3 most likely the largest one. The risk of a decreasing aftershock will happen with time,” Yule said.

Iranian students on campus knew of the earthquake from family who called, but were not personally impacted.

According to one person who isn’t a CSUN student, but likes to study on campus, describes what is going on there from reports from her cousin who lives in the city of Kermanshah.

“I heard that lots of people who lives around the city dead or injured (Kermanshah has a lot of rural area around like other cities) and their houses completely destroyed,” said Azadeh Ardeshir.

Ardeshir describes what the government is trying to do help the people that are going through this crisis.

“The government and the people who lives in other cities trying to collect necessary stuff and send them,” Ardeshir said.

Yule describes the type of area that was struck by the earthquake and why there was so much damage.

“It is a pretty remote area with small villages and towns and the building codes are not very effective and that’s why you are seeing the damages,” Ardeshir said. “The earthquake was deep in the Iran-Iraq border… This one was a little larger than normal.”

According to recent reports from Iran, Ayatollah Ali Khamenei the supreme leader of Iran is criticizing the government assistance and wants more action, according to ABC news.