Christopher Lee: An insight into the life of a student veteran 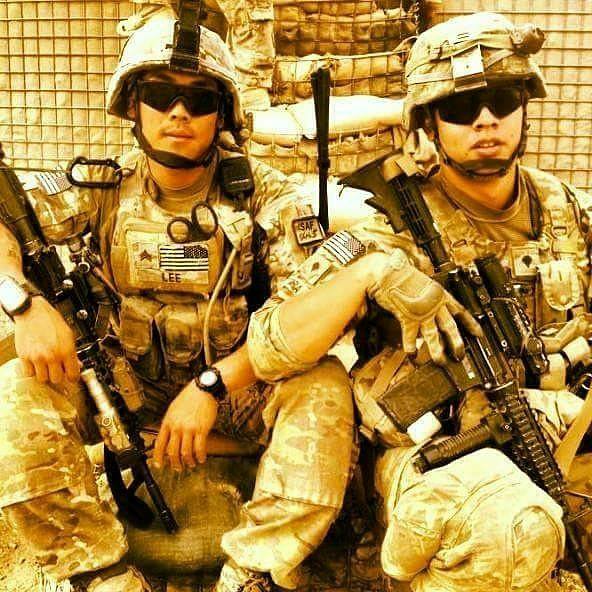 Kinesiology major Christopher Lee commutes on his skateboard, has class Monday through Friday and holds a job on campus. This description captures the essence of the quintessential American college student. However, the road to CSUN was a longer and tougher one for Lee as his past endeavors distinguish him from the rest of the student population. He represents a group that accounts for only four percent of undergraduate students.

Christopher Lee is an army veteran with tours in Iraq and Afghanistan under his belt.

The Korea Town native knew that he wanted to give back to his country since he was in high school, but he decided to give college a try as he noticed most of his friends did straight after graduating. He attended Santa Monica College for two years where he majored in art and worked three jobs to pay for school. Still, Lee didn’t feel that he was fulfilling his goals.

“I think it was that summer of 2009 where I was just like ‘I can’t keep doing this, I’m going to put everything away and I am going to join the army and see what the military has to offer.’,” said Lee.

He shipped out to Fort Benning, Georgia in Aug. 2009 where he completed sixteen weeks of basic training to become an infantryman. He then returned home before being assigned to Fort Stewart, Georgia with the third infantry division.

In July 2010, Lee was deployed to Iraq as a private first class. “When I heard that we were going to Iraq I was very happy, I was very relieved,” he also explained that his mother wasn’t exactly stoked about his deployment. “My mom was just in denial and I can’t blame her. She was just being a concerned mom. If anything, I love my mom more because of that.”

Lee spent 12 months in Ramadi, Iraq as part of an advise and assist mission to return control to Iraqi forces. His first tour wasn’t really combat heavy and he described it as an “easy ride” that did not get him prepared for his next deployment in Afghanistan. Lee intended to get out of the military when he returned home from Iraq in June 2011, but he instead re-enlisted for three more years in 2012 after hearing about a possible deployment to Afghanistan from his unit.

In March 2013, Lee was deployed to Afghanistan, but this time as a E5 sergeant. He notes this as one of the biggest differences between his two deployments, “It was a lot different because in Iraq… I just had to worry about me and my leadership took care of me. [In] Afghanistan, I was their leader and now I had to take care of four guys under me.”

Lee and his unit arrived in Afghanistan at the beginning of what is known as “fighting season,” a period in Afghanistan that provides suitable warm weather for the Taliban to attack compared to the less suitable cold and snow of the winter. The “luxury” of an established base was not available this time around; instead, Lee was assigned to a more makeshift combat outpost. His outpost often ran out of food and running water. He recalls the “demoralizing” experience of strictly eating MREs (meals ready to eat), asking people to mail in ramen and showering with water bottles. It did not take not long for Lee to become affected by the situation in Afghanistan.

“I guess it didn’t really hit me until one of our first missions where we came across two engineers that had lost their arms already,” recalled a retrospective Lee, “I couldn’t really process everything in because of the situation… we were still under fire and trying to help these people out.”

He then fell into a slump of sadness as Lee described his state of mind in Afghanistan, “No matter where we went, we weren’t safe. It was already stressful in that kind of situation and then I’m thinking to myself like ‘Man, what’s the point of all of this?’ because once we leave they’re gonna go back to destroying each other.”

Eventual access to the internet helped him cope with the stresses of war as he would see his friends and family back home through his Facebook timeline.

“My newsfeed… just all of my friends smiling, my family smiling, people having fun…that made me say like ‘Okay, I’m fighting for them’ that gave me the temporary motivation to keep pushing on until the end of deployment.”

Lee’s most impactful experience and display of selfless courage came in towards the end of his deployment in Afghanistan.

“Afghanistan could not prepare me for what the next day held. It was always something new. I will never forget Sept. 2nd, 2013 where we were in a mission, it was a route clearance mission, about a 300 pound VBIED blew up next to us and I ended up going into a burning vehicle and trying to pull someone out,” he reminisced.

“Even though I had never met the guy, I will never forget his face and how he looked. That was a hard one for me,” finished a pensive Lee with a lower tone in his voice.

The skirmish lasted for about 20 hours and he recalled returning from the mission covered in blood. Lee’s courageous exploits in the midst of that battle helped save the lives of everyone that survived.

He returned to the states in November 2013 and began the transition out of the army the ensuing year. During his transition out, he took CrossFit courses at Fort Stewart, Georgia and became a physical trainer for injured soldiers. He met his wife, an employee for the department of defense, through CrossFit as well. He developed an affinity for fitness applied to schools with strong kinesiology programs. His best friend, a political science major, helped him apply to CSUN. An acceptance letter was all it took to bring Lee to Northridge in the fall of 2015.

He had no intention to be involved with campus until he attended an orientation hosted by the Veteran’s Resource Center. He says that the VRC helped transition into civilian life and helped him deal with his wife being diagnosed with cancer.

Lee now works at the VRC where he promotes well-being and helps fellow veterans.

He commented on the hardships that veterans face when returning from deployment. He feels that there is a disconnect in the communication between the veteran population and the public. He says that people either look down on veterans or expect too much from them. Lee says that people have met him with a certain level of hostility even on campus, with comments ranging from bashing him for supposedly “fighting for oil” or suggesting that he has little to worry about because he receives military benefits. However, he believes that there is a lack of understanding on both sides as he knows of veterans that have yelled at civilians for simply expressing their gratitude on Memorial Day.

Lee also believes that the Army leaves veterans ill-prepared for careers after the service. According to Lee, programs like the Army Career and Alumni Program, one that he went through, are merely checklists and do not provide any substantial training or applicable skills for future jobs.

The 28-year-old is still reeling from the physical toll of service as he suffers from joints pains and his wife has to wake him up to stop him from grinding his teeth while he sleeps. However, he is grateful for his stable and improving mental health as he says he is “on the right track”.

He is currently a senior and plans to hopefully get into graduate school to become a physical therapist and continue to work with the veteran community. He lives just off campus with his wife, who is now cancer-free. He attributes his new-found success as a civilian and a student to the VRC, his friends and family.

“If it wasn’t for them … and my friends and my family, I don’t know where I would be right now,” stated Lee.