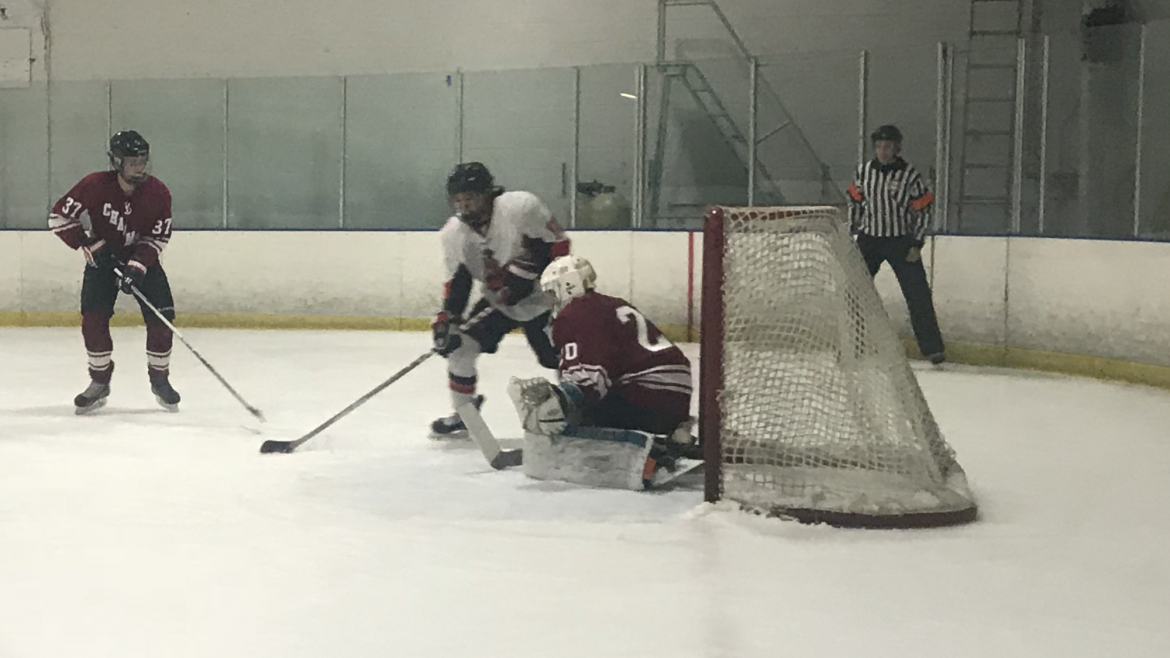 Tommy Pang (11) walks in front of the net and scores for CSUN Friday night at the Iceoplex in Simi Valley. Photo credit: Solomon Ladvienka

Following a thriller two weeks ago against rival Long Beach State and having last week off for Thanksgiving break, a rested Matadors squad took it to a visiting and struggling Chapman University team.

The Matadors pulled away quickly, and Berengut added his second, followed by goals from Quentin Abaya, Alex Reints and Tommy Pang.

“Everyone was just connecting,” Reints said. “Nobody was being selfish. We were moving the puck well in this game.”

Matt Bushton had a career night and assisted on three of the five goals.

“I think I used this game as a stepping stone to elevate my game and start producing for my team, especially since coming back from my injury,” Bushton said. “I think that the team was the main reason that I had the game that I had because without them and their support, I wouldn’t of been able to produce in the game like I did.”

Chapman showed fight in the opening minutes of the second, but the Matador onslaught continued.

With an absent John Blascoe on the top line, head coach JP Gale added John Michael Laurin to the tandem of Berengut and Reints.

“It was just a great time playing with those guys,” Laurin said. “We have great communication with all fast players and we were just able to make it happen.”

Up 9-0, every goal was crucial for CSUN to score because of the point system that determine playoff and ranking position.

“In order for us to make regionals, we have to start putting up more points,” Berengut said. “That’s exactly what we did today.”

“Scoring my first goal felt good and gets the monkey off your back about not producing for your team,” Bushton said. “I hope there’s more to come but if they are to come, they will. We just have to wait and see.”

Goal after goal came pouring down in the third period for the Matadors. Matt Hoover got back on the goal sheet, followed by Bushton’s second goal on the night. Quentin Abaya then recorded his second on the night while George Reznikov concluded the night by scoring his first collegiate goal.

Berengut, Reints, Laurin and Bushton all finished the night with at least five or more points on the score sheet.

“All of these guys seem very dedicated to the team right now, especially with us going out on top prior to the break,” Laurin said. “We’re going to get better during this break and not get worse.”

The Matadors improved to 9-7 on the season and are riding a four game winning streak before entering the winter break.

“We’re on a winning streak right now,” Reints said. “We’re going to try to keep it going into January. Everybody’s going to work their backsides off throughout the winter break and let’s keep it going.”

The Matadors will return to the ice when they travel and face off against Chapman again on Jan. 6.