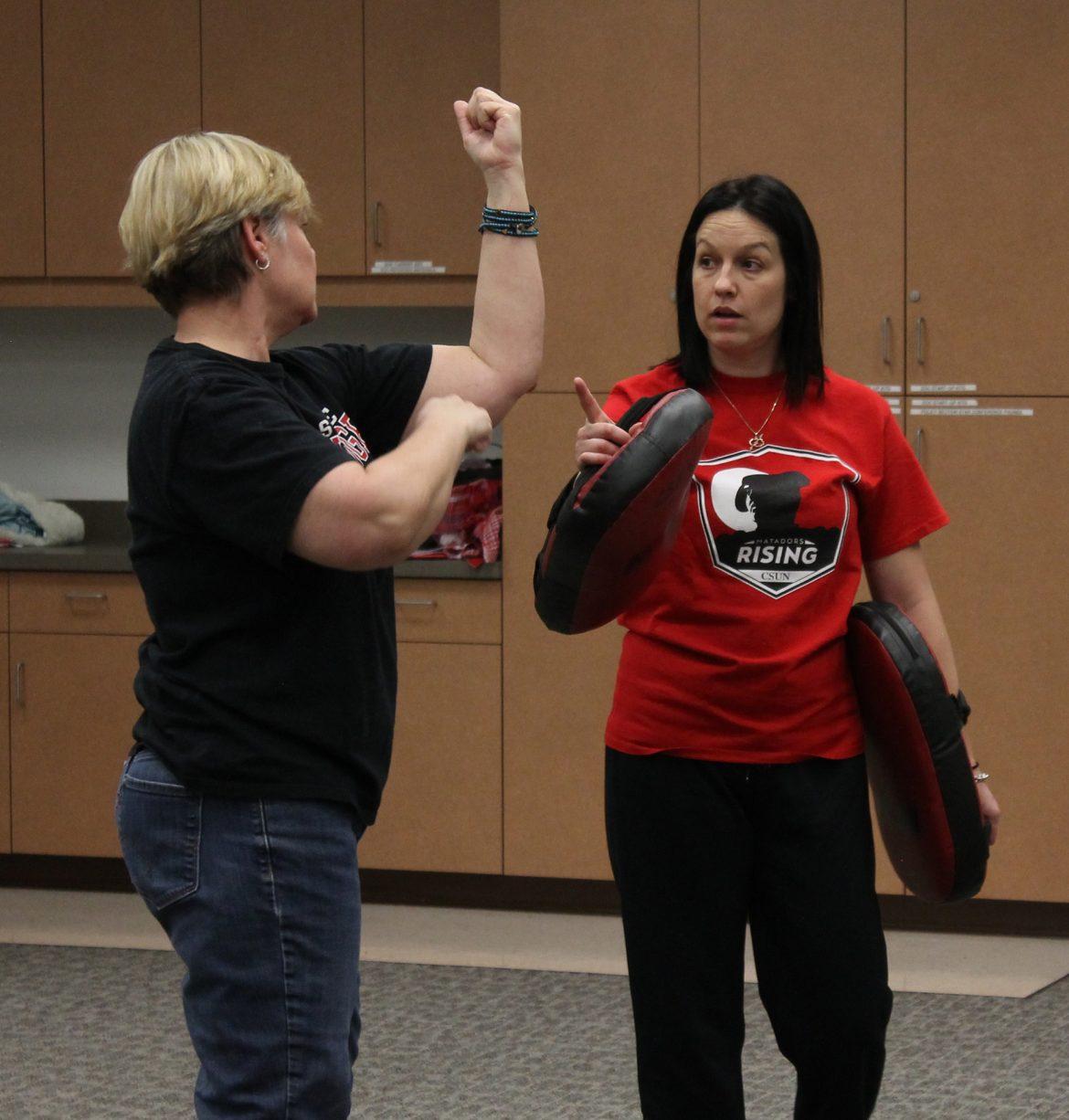 Instructor Stacy Nowak (right) corrects a participant during one of the Tuesday evening classes inside the training room on the 2nd floor of Police Department Services. Photo credit: Clare Calzada

Instructed by Stacey Nowak, head of the Crime Prevention Unit and Matador Patrol Coordinator, women were given hands-on training in self-defense and comprehensive instruction on awareness, prevention, risk reduction and avoidance in three-hour sessions held Tuesday and Thursday evenings in January.

Nowak projected energy as she demonstrated the tactics and physical techniques the R.A.D. (Rape Aggression Defense) Systems For Women’s course illustrates in their instructional reference manual, which was provided for each participant to take home.

R.A.D. Systems is one of the country’s largest growing self-dense programs and has been taught at over “450 colleges, universities, police departments, local transit companies, military bases, women’s centers, rape crisis centers and independents across the United States and Canada”, according to their website.

“Its a valuable program,” Captain Scott G. VanScoy said, whose own three daughters have taken the course multiple times.

The workshop is a condensed version of the credited course offered separately for men and women by the Department of Kinesiology in partnership with Police Services throughout the school year.

The in-depth course covers both basic and advanced techniques with various simulated assault scenarios, in which both participants and instructors wear protective gear.

After being certified in August 2016, 35 year-old Nowak has been a R.A.D instructor for little over a year. She also teaches workshops on identify theft, cyber safety, pepper spray defense and R.A.D. for Men.

“Its about what to do in the event an aggressor could potentially attack you and how to escape that threat,” Nowak said in a description of the program. “What we’re doing is providing viable options for women in these situations.”

Nowak worked one-on-one with participants, covering how to defend oneself while standing up, from behind or from on the ground, while the rest of the class took initiative and practiced with each other.

They worked in pairs, so that both would learn the effectiveness of the techniques not only from the standpoint of the victim, but the aggressor as well.

Each admitted their hesitance in the beginning, cautious about yelling loudly and putting their full strength into the techniques, but were invigorated as the workshop progressed.

What Nancy Sedano, who works in University Advancement, took away most from the workshop was a confident mindset.

“When I first started I was feeling like I don’t know if I can do this,” Sedano said. “But if anything, I walked away with confidence and knowing that I can learn the tools that I need to defend myself.”

She took the workshop with her 16-year old daughter at the recommendation of a colleague and said she would definitely continue to recommend it, especially to mothers and daughters.

Claudia Melendez, 22, a Criminology and Phycology major who graduates in May, shared her opinion on the importance of workshop: “I think its necessary for women to take self defense classes and to know some basic technique at least. Its just vital information to know”

“Stacey is a really great instructor. She makes it active and engaging. I enjoy it a lot” she added.

28-year-old Alyssa, a member of the community, revealed how personal the workshop was for her: “Several years ago, I was assaulted on the street. I have wanted for a very long time to take a course to learn how to defend myself in situations like that.”

To mark the end of the workshop, the participants were given a tour of the Police Department facilities by the Captain on the the final day of class, in replacement of real-life simulation due to lack of staff members.

For women or men interested in learning more about self-dense and personal safety, visit the Programs and Services page of the Police Department website. Online registration is open for the next R.A.D for Women workshop taking place on June 12th, 14th, 19th and 21st from 5:30 to 8:30 p.m.

radKids is also available for children ages 5-7 and 8-12 years old at a 10 dollar charge per child.

Once you graduate from any class or workshop, you get a lifelong pass to attend another instructor’s class for free anywhere in the U.S. or Canada because R.A.D is endorsed by the International Association of Campus Law Enforcement Administrators (IACLEA).

Correction: An earlier version of this article misspelled Alyssa.