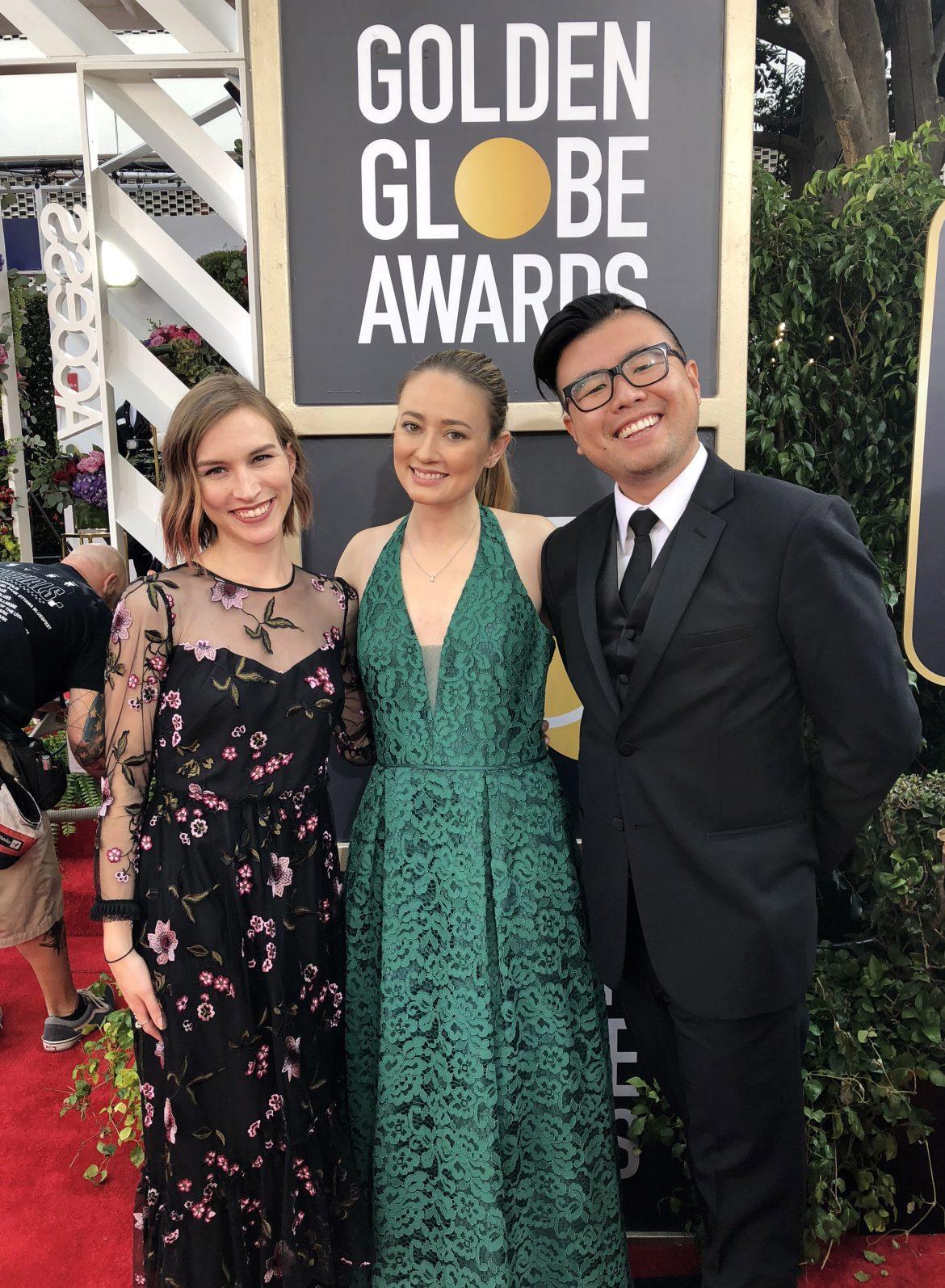 Allison Bird (left), Amanda Derzy (center) and Robert Ahn (right) in the middle of the red carpet at the Beverly Hilton Hotel.

The 75th Golden Globes that took place Jan. 7th was full of unforgettable moments, from the powerful solidarity of the #TimesUp movement to Oprah Winfrey being the first black woman bestowed the Cecil B. DeMille lifetime achievement award.

Can you imagine not only watching these moments but posting about them on social media for millions of people all over the world to see?

Two senior CSUN students and one recent graduate got to do just that while going behind the scenes and exploring the famous red carpet.

Allison Bird, 24, Robert Ahn, 30, and Amanda Derzy, 29, are all Film Production majors who were recommended by Professor Nate Thomas for a Golden Globes four-day internship with the Hollywood Foreign Press Association (HFPA).

They posted as soon as the show began live streaming, noting celebrities as they stepped onto the red carpet and announcing winners onto the official @goldenglobes social media accounts, including Twitter, Facebook, and Instagram.

Derzy acted as an assistant manager upon invitation after interning at last year’s Golden Globes and oversaw Bird and Ahn in their various responsibilities.

“Every word, every photo, every tag,” Bird explained, “was double and triple-checked to make sure everything was perfect for posting.”

Bird described having that much responsibility as “definitely nerve-racking!”

Derzy shared that keeping the posts interesting was most challenging for her, as well as hitting their contractual obligations because they had to not only satisfy their followers but their sponsors too.

Bird and Ahn also got to do some photo and video editing, as both have their major emphasis in editing.

“We were the first interns they hired who had editing experience,” Ahn said. “It was a great feeling to be needed and to have a skill that was actually useful in that context.”

Speaking of being ahead of the curve, each brought their own personal laptop, so when a disaster seemed imminent when two of their internet browsers froze up while tweeting, they were prepared and able to handle the situation quickly.

However, such challenges are not without their rewards.

From their 2nd floor headquarters (endearingly nicknamed the “war room”) the team could see celebrities on the carpet and hear all the media yelling names and cheering from below.

The best thing about the whole experience for Bird was working alongside the team: “They were very open to creative input and it was a pleasure hanging out with them for 10 hours a day.”

She also noted eating the delicious gourmet food served every day was an added bonus.

For Ahn, this bonus came in the form of getting to edit videos and meet the people behind the scenes who set up the red carpet and venue. “It was great to see that these events don’t come from nothing,” said Ahn.

It was another highlight for Ahn to see celebrities, like actress and red carpet host Missi Pyle, in “civilian clothes” practicing in preparation before the event.

Derzy said, “It’s really cool to know that in our small way we enriched their experience.”

Despite all that went on over the course of the event and during the hectic bustle of their internship, all agreed that Oprah’s eight-minute speech was one of the highlights.

“The whole room fell quiet,” Bird recalled. “It was a very powerful moment I will never forget.”

It was a moment that reflected the solidarity of #TimesUp movement, to which Ahn and Bird both visibly supported by wearing black on that day.

“I appreciated the fact that men and women were standing together,” Derzy said.

Bird stated, “As a woman going into the industry myself, I am very thankful for and supportive of this movement.”

For Ahn, personally, “I feel a lot a relief that these movements are gaining traction because at the end of the day I want to work in an industry where these [sexual assaults] are not normal occurrences”.

With the experience they now have under their belts, Ahn and Bird are starting internships with Focus Features, a subsidiary of NBC Universal.

Derzy is currently finishing the Golden Globes wrap-up and volunteering at her local Habitat for Humanity.