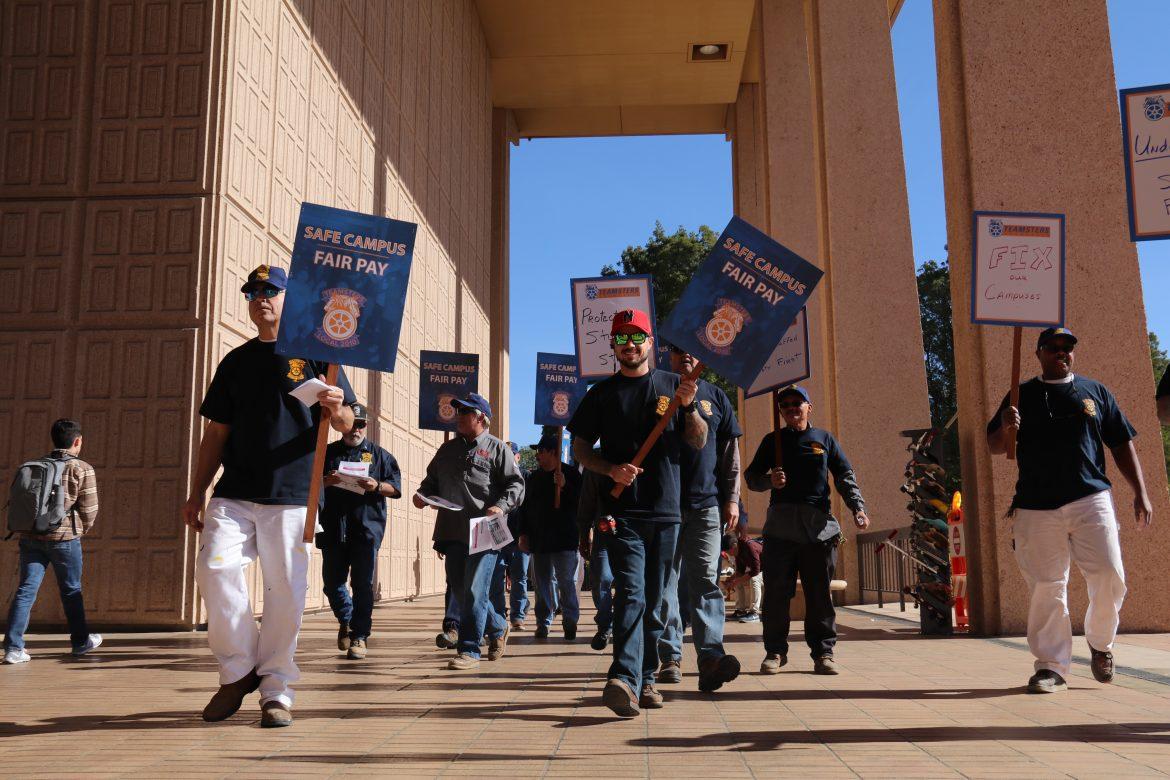 Protesters assembled behind the Oviatt before marching out to the front steps. Photo credit: Kelcey Henderson

CSUN maintenance workers marched to the front of the Oviatt Library at 11:30 a.m. toting signs that read “SAFE CAMPUS FAIR PLAY” and “OVERWORKED & UNDERPAID” in an effort to shed light on threats posed to students by years of negligence of campus facilities and demand better wages for maintenance workers.

Christopher Rooney, a metal worker of 28 years at CSUN and the chief union steward for Teamsters on campus, helped spearhead Tuesday’s protests. “We’re out here protesting because we are in the middle of negotiating salary and benefits with the chancellor’s office and we don’t think that they are giving us a fair shake,” said Rooney.

Demonstrations took place across California State campuses and were organized by Teamsters Local 2010, a union that represents over 1100 plumbers, electricians, carpenters and other skilled trades CSU workers. The union is currently in wage reopener negotiations with the CSU.

Workers take issue with lack of investment in upgrading or replacing aging campus infrastructure that often causes interruptions in education services and creates unsafe environments for faculty and staff members. The CSU deferred a $2.6 billion maintenance backlog and acknowledged the complications of doing so, calling the infrastructure on many campuses “obsolete.” The backlog has been reduced to $2 billion in recent years according to the CSU website’s 2017-18 support budget. Still, the CSU acknowledges that the backlog continues to grow an estimated $143 million every year.

Reggie Castro, a worker of 34 years at CSUN’s Physical Plant Management, also helped lead the protests. Castro says he is frustrated with continued installation of new buildings even in the face of ailing infrastructure and an inadequately staffed maintenance workforce.

“We need Chancellor White to take a look at what is going on here and to get us more staff, get us better wages and to help us out,” said Castro.

He was also out to protest the forfeiting of campus maintenance work to contractors. “We just let go of two painters…[yet] we’ve got contractors, over in some of the buildings, painting… and it’s like well if you can pay these guys why can’t you pay our guys. We’re skilled trades workers. We do a much better job than the outside contractors,” he added.

Protesters then marched from the Oviatt Library to University Hall where the protest ended, presumably to garner the attention of President Harrison.

The protest was swift, concluding within 30 minutes, as it was during the workers’ lunch break. Extending the protest past their lunch break would have been considered a strike and a breach of their work contract.

President Harrison was not available to comment on the situation.