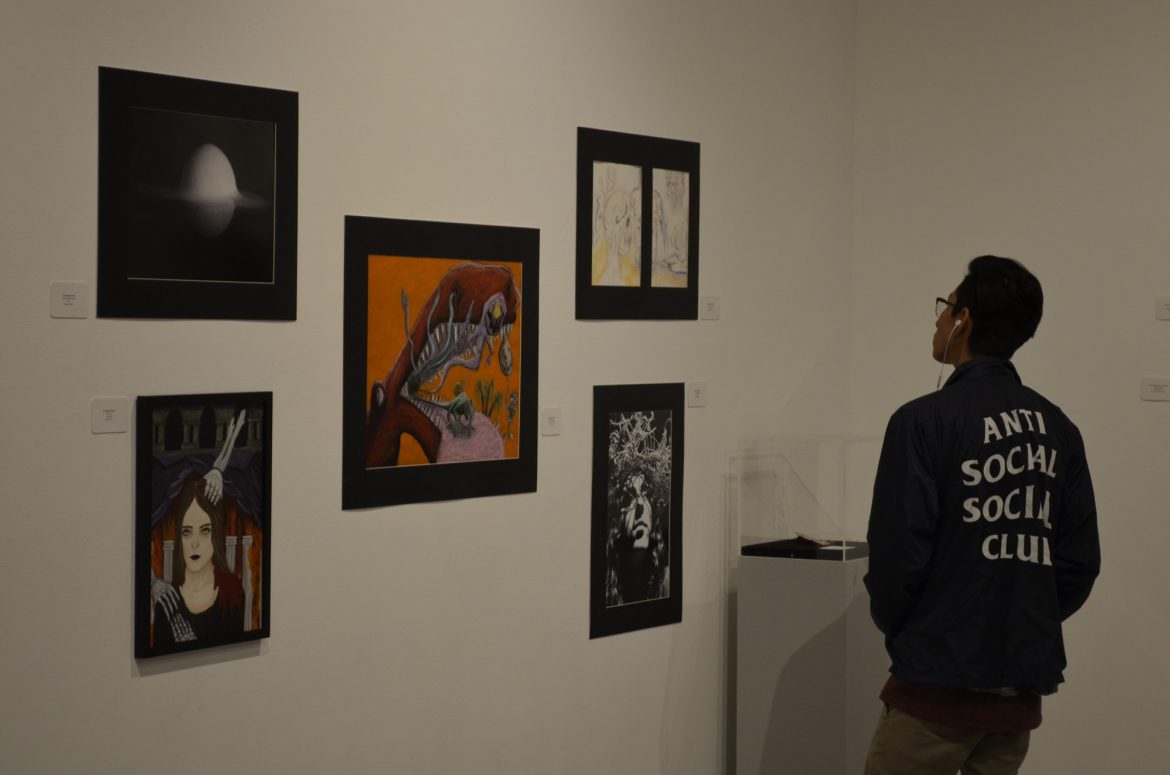 Six entries were selected by faculty from each of the schools to be displayed at the CSUN art gallery for the three-week-long show.

Gallery director Jim Sweeters said the exhibit helps to recruit future students who may be looking to develop their skills at CSUN after graduation and give the selected students a perspective on other work being produced in their same area.

The show has roots going back to just after the Northridge earthquakes which destroyed the original art building and forced classes into trailers that occupied spaces where the current art buildings stand.

In 1997, art department chairman Joe Lewis suggested hosting an event which invited area schools to collaborate on a large mural to be painted on one of the classroom trailers hoping to reinvigorate art enthusiasm among a ravaged and rebuilding community.

The tradition was met with so much success that it has been perpetuated and evolved into its current form, though never losing its focuses on driving interest for young artists.

Students are not the only stars of the gallery as faculty from the participating schools were also encouraged to submit work for display housed in its own small room adjacent to the gallery entrance.

Talented as the many teachers are, Director Sweeters was very impressed by the student work submitted this year.

“A lot of the times, the student work is actually better than the teachers’,” Sweeters said.

There have been many visitors at the show from many walks of life and for different reasons.

Freshman Juan Castillo found himself browsing the displays Thursday afternoon reflecting on work produced by the various schools from his area including John H. Francis Polytechnic High School where his younger sister attends.

Castillo was impressed by a piece featuring a pond with coy fish. “The fact that it’s a photo is shocking,” Castillo said, “It looks like it should be a painting.”

Shreiber was quite impressed by the show and said she is also very happy to see student work being displayed as part of the campus image.

“It seems like they have a visual model for the school and they’re having the students go out and actually do it,” Shreiber said.

Film production major Fernando Lopez has been to previous years’ shows and said he’s always been surprised by what he sees.

Referring to this year’s show, Lopez said he was impressed by how aware the students are of important issues. Lopez pointed to an entry illustrating President Trump amidst a background of Twitter tweets and a collection of linoleum block prints from Northridge Academy High School illustrating topics of social injustice.

A new exhibit “Remembering Animals,” curated by Julia Schlosser, is set to open on Feb. 10 and will feature rituals, artifacts, and narratives associated with the loss of pets and other animals.

To learn more about the coming exhibit visit www.rememberinganimals.art