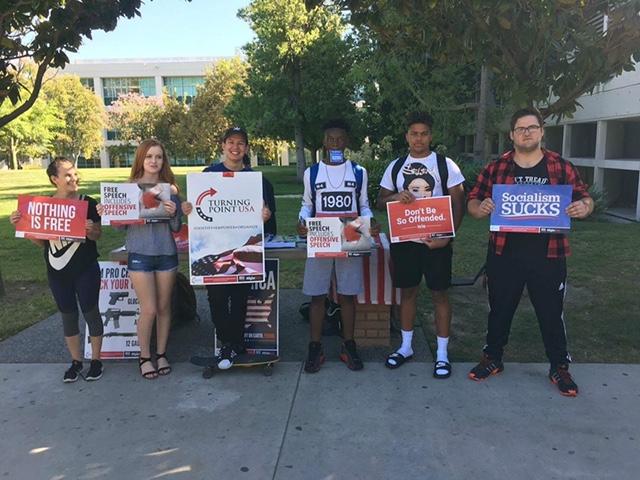 Despite the handful of political groups on campus, there is a noticeable absence of conservative clubs at CSUN. In fact, at the moment, there is only one sanctioned right-leaning club on campus: Turning Point USA.

For CSUN, Turning Point USA is a new addition, as the club was officially approved by the university this past fall semester. The chapter’s president, Claire Alison, feels like TPUSA’s establishment could promote more participation among conservative students on campus.

“A lot of students don’t like saying that they’re conservative, ” said Alison, a senior majoring in History. “We’ve received an overwhelmingly positive response toward [TPUSA] from students.”

Not every campus has been as receptive to TPUSA as CSUN. In 2016, Drake University denied a permit request for its TPUSA chapter to become a formally recognized student organization . In 2017, a petition for a TPUSA chapter at Santa Clara University was rejected by the college’s student senate.

While TPUSA CSUN’s club registration has gone through relatively smoothly compared to the chapter’s counterparts at Santa Clara and Drake University, it has faced some dissent from the university. According to Alison, TPUSA’s CSUN chapter faced backlash from the university during its application process due to some of their tabling signs. In particular, CSUN considered the club’s “socialism sucks” sign as potentially offensive.

Despite the university’s concerns, students, both proponents and opponents of TPUSA’s positions, have remained civilized, according to Alison. Rather than drawing confrontation, TPUSA’s CSUN arrival has so far only provoked constructive dialog between opposing viewpoints. During the tabling process, Alison has only witnessed several heated, but amicable debates between club members and liberal students.

Osje Peña, a writer for conservative news outlet “Campus Reform” and a member of TPUSA’s CSUN chapter, feels that these debates provided by the club have helped bridge a gap between conservative and liberal students.

“We don’t have to agree on everything, but as long as we find common ground, that’s what we’re looking for,” said Peña, an Economics major in his third year. “I think what we’re really promoting is conversation [which] is key in our environment.”

Alison sees these debates as a big part of the club’s future. The club has sought out clubs such as CSUN’s Young Democrats chapter for future on-campus debates. In fact, Alison believes participation of liberal students will be imperative for the growth of TPUSA’s CSUN chapter.

“We’re non-partisan. Everyone is welcome to [Turning Point USA],” said Alison. “Especially liberal [students]. Let’s talk, and let’s see how we can make this country better.”

Turning Point USA is not the only organized conservative presence on campus. CSUN’s chapter of College Republicans also applied for a club permit this past fall. However, the club’s president, Trystan Vierra has ran into a few roadblocks through the application process.

“It’s mostly been work constraints. I have work, [the College Republicans] Vice President has work, we’re working around 40 hours a week while trying to go to school,” said Vierra, a junior majoring in Music Industries Studies.

Unlike Turning Point USA, which has the backing of a larger organization, College Republicans is dependent on members such as Vierra to complete arduous application processes such as drafting a club constitution.

Vierra says while the university has been accommodating towards the club’s inception, the difficulty of finding a faculty advisor has delayed the formal approval of CSUN’s College Republicans chapter. The club has recently found a faculty advisor, who wishes to remain anonymous due to the potential backlash among his colleagues his position may bring.

For clubs such as Turning Point USA and College Republicans, and the students they are comprised of, the uphill battle continues for conservative conversation on CSUN’s campus. For Osje Peña and Claire Alison, part of that battle is to dispel the notion that conservatives are some sort of unapproachable “boogeymen”.

“[Conservative students] often have polarizing images, but I think it’s time to break the ice,” said Peña. “Come meet us. We’re students. We’re humans.””Everyone should come and talk to us.” said Alison. “[Clubs like Turning Point USA] aren’t reserved for a certain group of people… these ideas really help everybody.”

Turning Point USA will be tabling this upcoming Tuesday and Wednesday at CSUN’s “Meet the Clubs”.