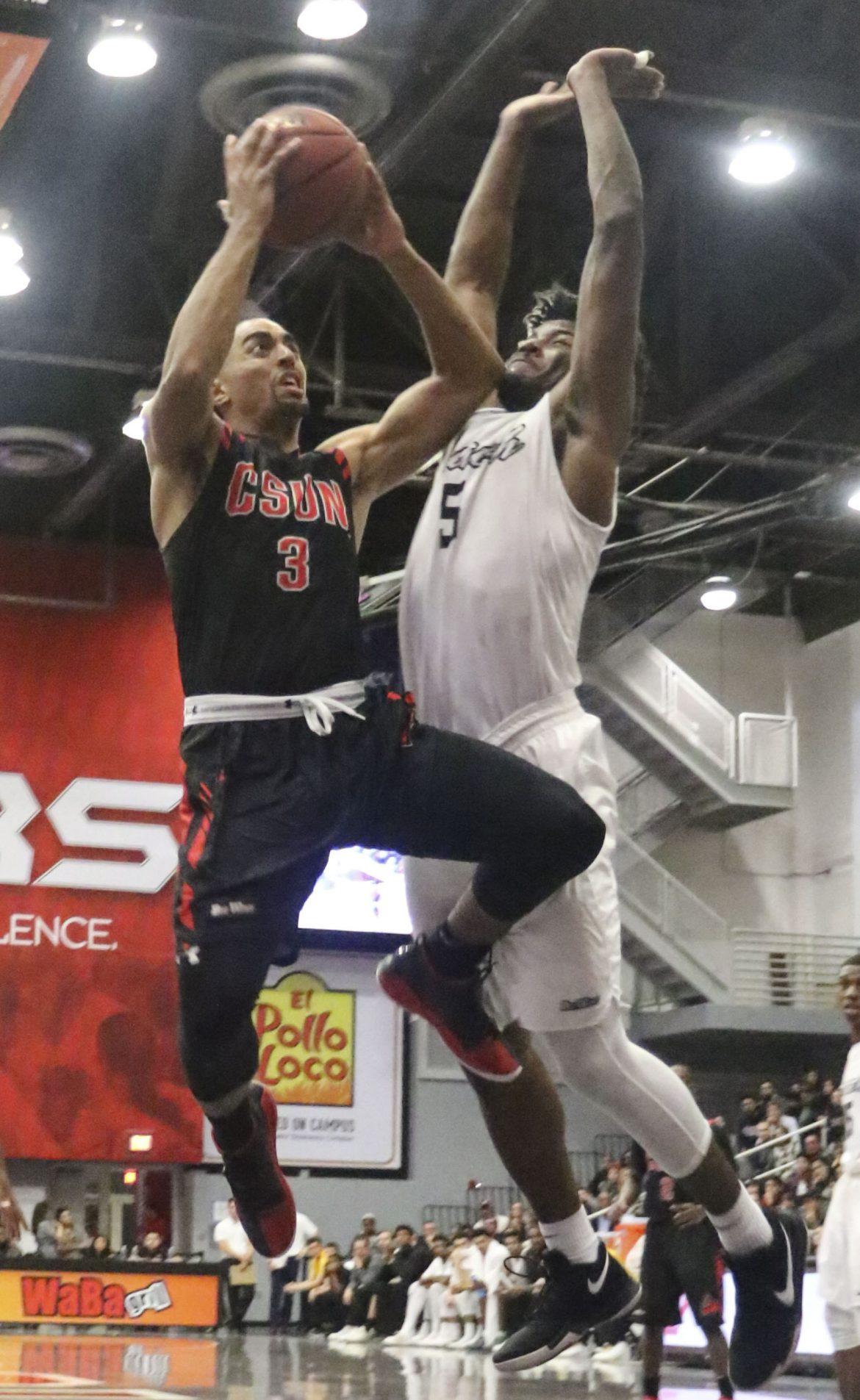 Guard Lyrik Shreiner makes a layup as Long Beach Mason Riggins attempts to block him at the Matadome, Saturday night. Csun in a steady battle loss to Long Beach 66 to 70.

With 7:02 remaining in the game and the Matadors trailing by three points, all the Matadors needed was a clean inbounds pass from underneath its own basket. Instead freshman point guard Terrell Gomez threw a bad pass that led to a dunk by CSULB’s, Mason Riggins.

The play proved to be a turning point and Long Beach State went on to score seven consecutive points midway through the second half and defeat CSUN fell at home 70-66.

Despite Tavrion Dawson having 29 points and 10 rebounds, the effort still wasn’t enough for CSUN (5-16, 2-5) who have lost two straight conference games.

“It was the second game in a row where I felt the pressure bothered him a little bit,” CSUN coach Reggie Theus. “We missed a couple of bunnies around the basket too and if we take advantage of those, we win the game.”

CSUN had opportunities in the second half but could not capitalize. Lyrik Shreiner had a breakaway steal but missed a layup with 6:02 remaining. The ensuing possession, Gabe Levin scored one of his team high 19 points and Long Beach State (12-12, 6-2) never looked back.

CSUN late in the game forced ill advised shots and finished the game 7-for-21 from 3-point range. In contrast, the Matadors only attempted nine free throws.

The Matadors still remain in strong Big West Conference playoffs contention despite the recent losing streak. Both games have been decided by four points or less

“We can analyze this in many different ways but the bottom line is, is we didn’t make plays down the stretch,” Theus said. “I think our defense has been the catalyst in how we’ve been playing. There are three things we concentrate on: our focus, our energy and our toughness. I think for the most part we are getting that from our guys.”

CSUN will continue its home stand on Feb. 1 against UC Davis who is tied for third place in the Big West Conference. Tipoff is at 7 p.m.