Most dangerous California intersection is in Northridge, study says 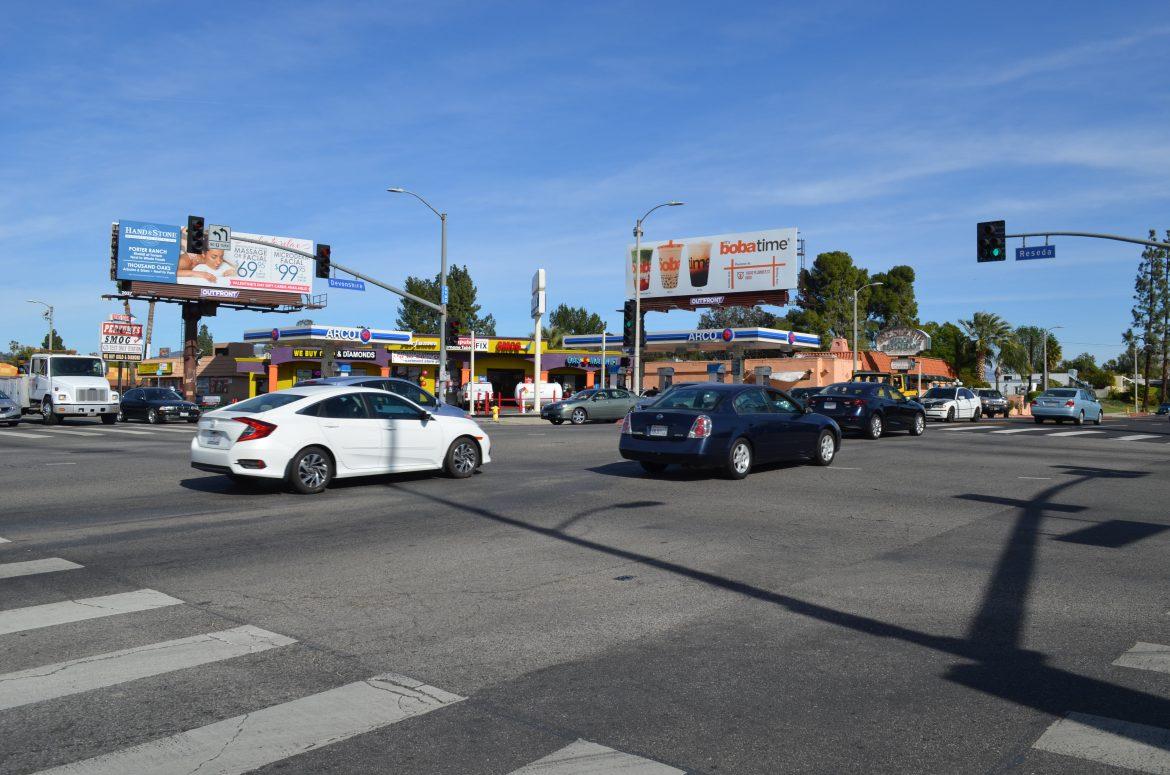 Devonshire Street and Reseda Boulevard is a common intersection for CSUN students as it rests in between campus and the 118 freeway. Photo credit: Tamara Syed

Los Angeles holds about half of the most dangerous intersections in California and two of the top three are located in Northridge according to a new study.

The study’s findings by the personal injury law firm Estey & Bomberger declares Devonshire Street and Reseda Boulevard as the most dangerous intersection in the state.

Data was collected by analyzing over 400,000 collision reports from 2015 through the Statewide Integrated Traffic Records System (SWITRS).

A scoring system was determined to rate each intersection’s danger level taking into account the number of accidents, injuries, and fatalities.

“I was surprised at the results of this study,” Professor Robert Kent department chair for urban studies said. “One of the biggest problems in this city are these large four to six-lane boulevards – people drive 50-55 mph which creates these mini-freeways.”

The intersection is the focal point of four commercial shopping centers and rests between CSUN and the 118 freeway. There are five major lanes, a left and right turn signal, and a posted speed limit of 40 mph.

“It’s one of the busiest intersections in the valley,” Professor Mintesnot Woldeamanuel of the urban studies department said. “There are several commercial activities in that area that induce heavy traffic.”

A number of city planning measures can be introduced to improve the safety of this intersection, “We can narrow car lanes and give way for pedestrian and cyclist infrastructures. This encourages drivers to use alternative routes, which eventually diffuses traffic,” Woldeamanuel said.

Experts believe community outreach and awareness can help better the safety of drivers, pedestrians, and cyclists. “The city could collaborate with community organizations such as churches, schools, colleges, clubs and the police department to educate drivers on safety precautions,” Woldeamanuel said.

“In addition to that, we need to require traffic school prior to issuing a driver’s license. You can make the roads and the vehicles more efficient but it does little if there is no behavior change,” Woldeamanuel said.

Although the study concluded Devonshire Street and Reseda Boulevard to be the most dangerous intersection, there were no fatalities reported. There were 57 total fatalities in 2015 with three different intersections in Southern California reporting three deaths each in Moreno Valley (Bridge Street and Gilman Springs Road), Palmdale (Pearblossom Highway and Sierra Highway), and Los Angeles (Haskell Avenue and Roscoe Boulevard).

A common intersection for CSUN students – Amanda Salazar, a 26-year-old graduate student in the special education credential program, was shocked at the findings. “I’ve never seen an accident there, as a driver I’ve never felt that it was unsafe,” Salazar said.

Professor Scott Howard a lecturer in the urban studies department is hesitant to accept the study’s findings, “I question whether they used sufficient data to render their determination,” Howard said.

“I didn’t see anything about the number of vehicles entering the intersection on a daily basis, or anything suggesting the cause of accidents,” Howard said. “In my view, the study is of limited value without the two additional metrics,” Howard said.

LAPD traffic service officer David Hovey oversees the Devonshire area and receives updated accident reports from across the state. “In relation to the state of California as a whole…there is no way that Devonshire and Reseda is the most dangerous intersection,” Hovey said.

Northridge is home to two of the most dangerous intersections in California based on this study but through proper planning, outreach and design – the safety of these major roads can be improved.