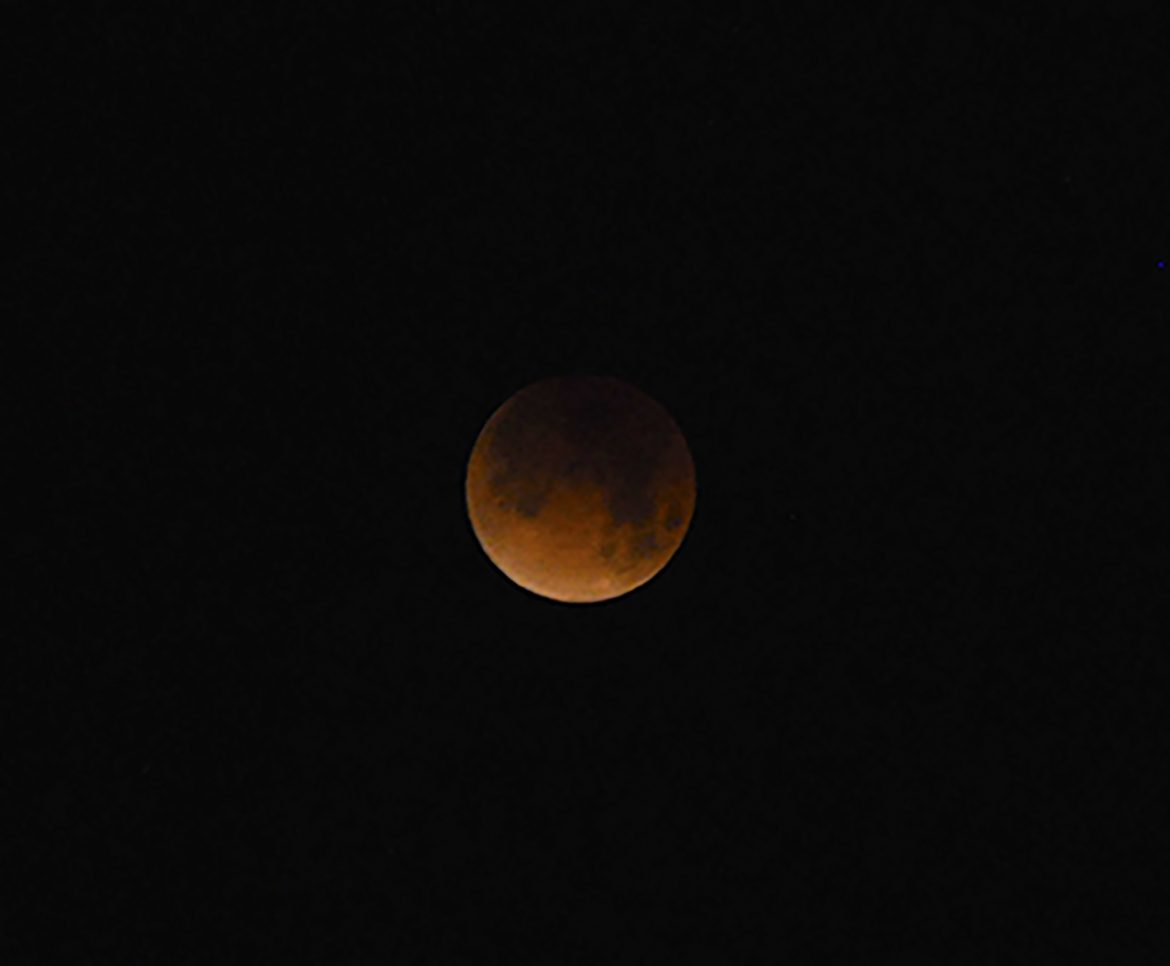 Invited by Professor Damian J. Christian of the Physics & Astronomy Department, students from classes ASTR 152 and 352 arrived around 4:45 a.m. on the the 6th level of the B3 parking structure. It was a small but intimate group of around 25 people.

The total lunar eclipse promptly began around 4:50 a.m in a cloudless sky. For those unaware of what that is, a total lunar eclipse is when the moon passes the Earth’s shadow during its orbit. Unlike the name “Super Blue Blood Moon” suggests, this shadow causes the moon to appear rusty or ‘blood red’ rather than blue.

What made this particular event so rare is that the moon was also at its closet to the Earth – hence, a ‘supermoon’ – and additionally the second full moon of the month – making it a ‘blue moon’. The last full moon brought in the new year on January 1st.

The order to which the events occurred is: full (blue) moon, supermoon and then total lunar eclipse.

Dr. Christian, an observational stellar and solar astronomer, commented that, “In Ancient Times people would get very worked up when the moon sort of disappeared and then turned blood red, so it was a really bad omen. But for us today, its just more fun to come look at it.”

Students did indeed enjoy themselves as they kept warm with complimentary coffee and cookies, while observing the moon up-close and in detail using a 5 inch celestron telescope and finder scope provided by Christian.

For 18 year-old Han Li, a freshman and Philosophy major, this was her first lunar eclipse experience. “Its pretty cool” she said, “I would do it again because I kinda enjoy the silence and the no traffic on the way to school”.

Christian explained why this rare event is also astronomically significant: “It shows you why its (our atmosphere) is so blue. The oxygen atoms scatter the white sunlight and they sorta’ve emphasize the blue and red component, so its goes and bounces off the moon.”

He also noted that Aristotle used lunar eclipses to deduce the Earth was a sphere when it was commonly believed that the Earth was flat.

The president of the CSUN Astronomy Club, 21 year-old Matthew Bernard, had one disappointment regarding the lunar event. “I would’ve liked to use the observatory on campus,” the Management Major admitted, “but right now the moon is 23 degrees above the horizon and in the observatory the walls are about 20 degrees (high)”.

At around 6:30 a.m. the total lunar eclipse ended and students proceeded to leave as the moon set below the horizon, most likely to catch up on lost sleep before the school day begins.

Thanks for joining us for the #SuperBlueBloodMoon! The next appearance of this trio in the U.S. — a total lunar eclipse, a “supermoon” and a “blue moon” — will be Jan. 31, 2037. Mark your calendars and join us again! Discover more about the Moon: https://t.co/jqvrRCANkk pic.twitter.com/PKBJ1sd1Uz