The Secret Society of the Sisterhood: “Reclaiming My Time” 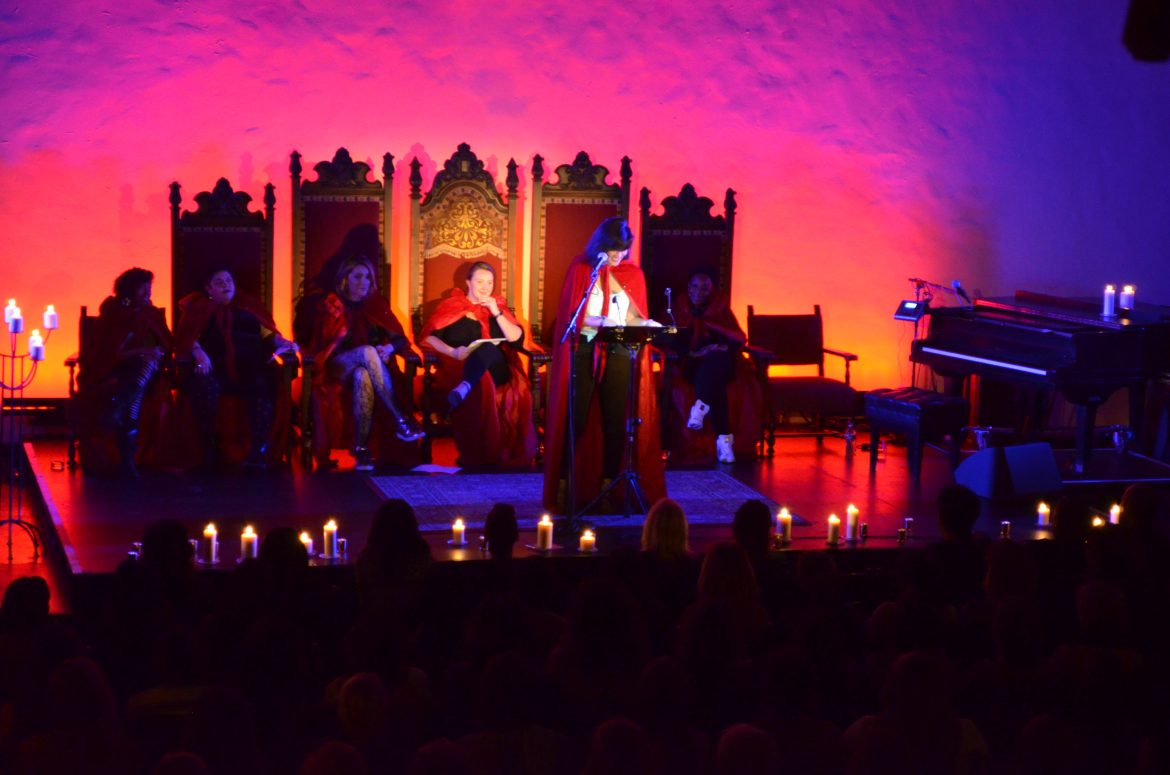 Jade Chang, author of "The Wangs vs. The Word", speaks about the harmful effects of "that's what she said." Photo credit: Tamara Syed

Silence filled the dark room as red hooded cloaks floated towards the stage, each individual lit a candelabra and took their seats on ornate velvet thrones. Removing their hoods, the society was now in session.

The Secret Society of the Sisterhood held its first monthly congregation at the Masonic Lodge at the Hollywood Forever Cemetery. A live speaker series showcasing artists, comedians and actresses sharing personal essays around a singular theme, “Reclaiming My Time.”

“I wanted to bring a well-rounded cultural experience to Los Angeles,” Trish Nelson the event producer said. “There is something so magical about having prolific women share personal stories and each person walking out of that space knowing they’re not alone in their shared experiences,” Nelson said.

There was an electric buzz around the room as Nelson asked the audience to join hands, reciting an oath as each person in attendance repeated it aloud. An uproar resounded and the first speaker took to the mic.

With proceeds benefiting WriteGirl, a nonprofit pairing at-risk teens with creative writing mentors, a 17-year-old poet recited her poem “No Room.” Each line was a personal look into her mind, with intricate details that painted a story of her heartbreak and strength.

Author Jade Chang delved into the sociological effects of the joke, “that’s what she said” in her thinkpiece. “Do I want to reclaim the joke? No, just the punchline. I want it to be a rallying cry. Yeah, that is what she said and she has things worth listening to,” Chang said.

Comedian Dell Harrison was in attendance at a minute’s notice due to two cancellations by “Vice Principals” actress Busy Phillips and “Crashing” star Jamie Lee.

Harrison shared an anecdote of the horrors of online dating, “I’ve been dating online and damn it I want my time back.”

Novelist and “Matilda” star Mara Wilson shared a courageous story of coming out to her parents, “My cousin thought it was a clever branding exercise.” Nelson spoke about her early 20s as an actress and stumbled over the words “plus size.” Breaking character to speak directly to the crowd, “It shouldn’t be a word!” she said.

The musical performer of the night, Our Lady J, a writer and producer for the show “Transparent”, effortlessly swept her fingers across the piano keys. “It is here that I find, this is what living feels like,” the lyrics to her song “Picture of a Man” shook the room.

Artist Kim Tabay produced an original painting while the speakers shared their anecdotes and Stevie Wilson painted watercolor caricatures of each performer throughout the night.

Every attendee received a membership card upon entering and Nelson plans to reward those who come to each month’s event with “something special” at the end of the year.

“I wanted this event to be a combination of sincerity and theatrics,” Nelson said.

In the wake of the Time’s Up movement, Nelson shares her thoughts on the future, “Women will forever be changed by this movement and as a result, the landscape is going to shift.”

The sisterhood will have a meeting titled “I thought I was going to die” under the full moon next month.