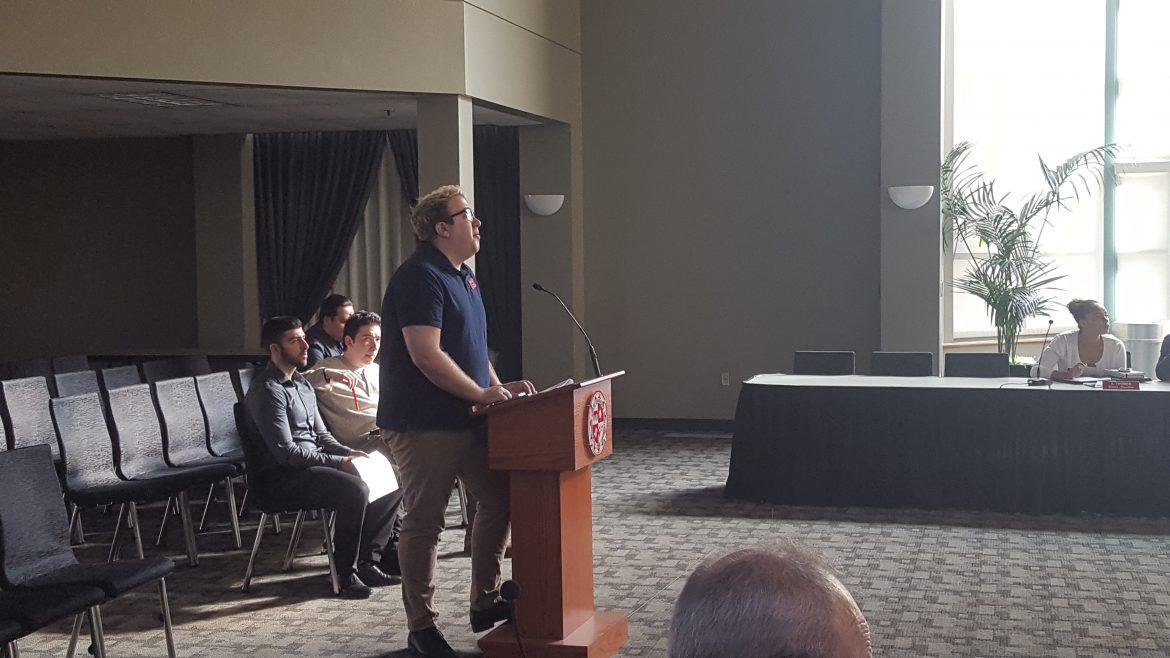 Chair of Legislative Affairs, Adam LaBrie, talks to senators at the A.S. meeting about the cause of the tuition increase and how A.S. plans to get students involved. Photo credit: Brandon Ilano

The Associated Students discussed the cause of the CSU tuition increase and their plan to prevent the increase from happening, at its meeting Monday, Feb. 5.

Adam LaBrie, Chair of Legislative Affairs, spoke to senators about how the operating budget of the CSU increases every year because of the way contract budgets are written. The additional spending next year (2018-2019 school year) on the Grad initiative ($75 million), compensation ($122.1 million), one percent enrollment increase ($39.3 million), campus infrastructure ($15 million), and mandatory costs ($30.9 million) will lead to a total of approximately $282.3 million.

“To prevent a tuition increase we need to get $282.3 million more dollars from the state,” LaBrie said. “That’s not what’s happening. For the 2018-2019 budget request, Governor Brown has proposed giving us $92.1 million on top of what we already get.”

The governor’s proposition is a 1.4 percent increase to the general fund but the additional spending is a 3 percent increase. According to LaBrie, there are two ways to prevent the increase, cut the budget and secure funding.

Governor Brown asked the CSU and the UC board of regents to postpone their tuition votes, which was done by both. According to A.S. President Jonathan Goldenberg, postponing the tuition vote will force the governor to look at what’s happening in the CSU system.

“I’m actually pretty happy they postponed the voting until March or May because I think it puts the ball in Governor Brown’s court,” Goldenberg said. “We really want to make sure we’re putting in every effort possible. I think it’s a good move and it definitely gives us as student leaders more leeway in terms of how much time we have to advocate for the needs of CSUN students.”

According to LaBrie, the time until the vote will be used to cut money from the budget, approximately $190.2 million from the CSU budget.

The other option is to secure more funding by either having the governor release a newly revised budget in May which would include the additional $190.2 million or the state legislator will pass an independent funding bill to allocate the $190.2 million.

“I’m going to participate in the activism because I’m paying out of pocket so this is really expensive for me,” Elizabeth Carmona, 23, public health major said. “A voice matters. Every voice matters. I don’t want tuition to increase.”

According to Goldenberg, A.S. wants to reach out to students to educate them about why the tuition increase is happening while also giving them the tools to advocate.

“The fight to keep the tuition from increasing isn’t a fight that only A.S. leadership can take on, it’s really important that every student that cares about tuition increase gets involved,” Goldenberg said.

“Whether that’s organizing with the student groups or trying to spread the news in their classes, we’re calling on every student to do their fair share of the work to make sure this doesn’t happen.”