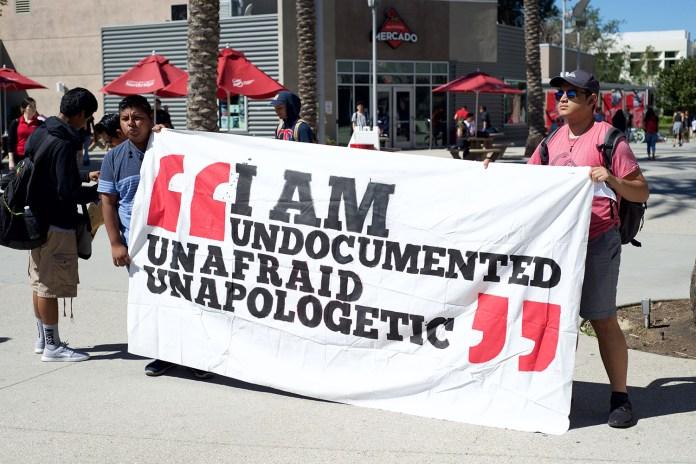 Daniel Martinez on the left holding the banner and his peer making their voices heard through protest last semester.

During his freshman year of high school he traveled to the US from his home in South Korea on a visa. He took the risk of staying in the US to further his education and pursue a career in theater. This student chose to remain anonymous.

Making the decision to come to the U.S. was not an easy one for him. This risk came with emotions of fear and anxiety.

“When Donald Trump became president, I was scared,” the theater major said. “Everything [President Trump] said was happening right away; somehow he was doing it.”

On Jan. 9, US District Attorney Judge, William Alsup, deflected President Trump’s attempt to shut down Deferred Act for Childhood Arrivals (DACA). The United States Citizenship and Immigration Services will resume accepting DACA renewal requests for individuals who were previously granted deferred action, according to an update to the USCIS website on Jan. 13. The USCIS will not accept new applicants as well as advanced paroles.

It is unknown how long USCIS will continue to accept DACA renewals since the Trump administration has made it clear they will challenge the ruling.

CSUN is currently home to approximately 1,500 to 1,700 undocumented students, according to Blanca Villagomez, student success advisor of the DREAM center.

Programs like DACA and the Dream Act help students support themselves by working and being able to further their education. This is a small victory for dreamers, but still leaves uncertainty as its recipients are unaware of what their future looks like.

The DREAM Center is overseen by coordinator, Dario Fernandez, Villagomez and 15 student workers and interns. The center offers multiple resources including emotional and social support.

“For a lot of our students, there’s a strong correlation between depression, anxiety and the uncertainty that exists due to the political climate and their immigration status,” Villagomez said.

Fernandez also agrees that the political climate has heightened anxiety within the students but also adds that this affects the families as well.

An additional fear is the fear of deportation since neither DACA nor the Dream Act provides citizenship. One small mistake such as putting down the amount of income in the parent section instead of the student section or having two last names on DACA forms and CSUN only writing one on paperwork, could affect a student’s application.

“I think we’re all dreamers whether we’re undocumented or not,” the anonymous student said.

Although he doesn’t qualify for DACA because he didn’t meet certain requirements, he has been fortunate enough to have his tuition covered.

The theater major shares that the process to fill out paperwork for DACA or the Dream Act isn’t easy. All Dream Act students have different cases and there is no set narrative for dreamers. For this CSUN student, he explained that he needs to prepare for renewal months in advance. This means collecting his mother’s tax information from South Korea and translating it into English.

Despite all this, he is hopeful and has adjusted to his life in Los Angeles. He considers CSUN his home.

“We’re all dreaming of what we want and who we want to be, these days people think of dreamers as something minor but we’re still part of American culture,” he said. “I’m never embarrassed to tell my friends I’m a Dreamer. This is a part of my life.”