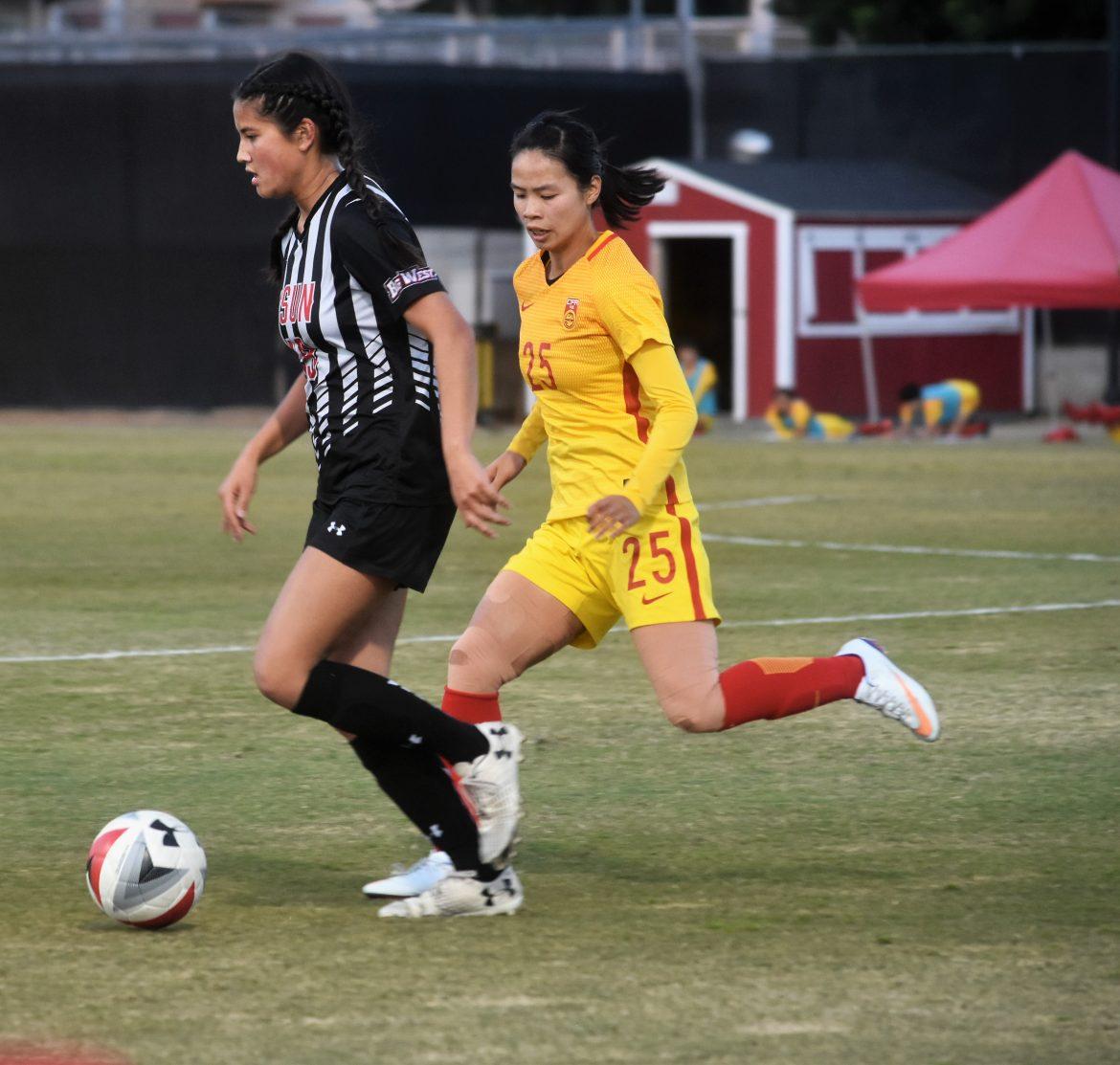 2017 Big West All-Freshman selection Amy Aquino is chased down by a Chinese midfielder. Aquino scored two goals and had one assist in 2017. Photo credit: Tamara Shapiro

The game went as most would expect against the 16th ranked team in the world. China outclassed the Matadors in every fashion of the game and displayed an elite level of speed and touch. China scored five goals in the first half and defeated CSUN 6-1.

China helped the Matadors see where the team can use improvement. Mainly its transitions from the back line to the midfield, along with learning to adjust against a team that has more speed and quickness.

“We really want to thank China for coming out today and playing against our team,” Coach Keith West said. “We are a strong team with a bright future but they showed us where we need to continue to work.”

CSUN players took note as China gave the Matadors a 90-minute clinic. The Matadors embraced the challenge of playing against a team whose players have been training along side each other for five to six years. It was a learning lesson of sorts for CSUN and an experience that players, like junior Destinney Duron, will not forget.

“They were one of the fastest teams that I’ve ever played against,” Duron said. “The way that they touch the ball, the way that they move was amazing. There is a lot of things that we need to work on as a team to be elite and I’m glad that we got this to play this game.”

The match also allowed for seniors, like goalkeeper Jenna Koziol, to play one more game at her home stadium. The Matadors highlighted how bright the future is with junior midfielder Marissa Favela and freshman forward Amy Aquino. Favela scored the lone goal for the Matadors and Aquino made solid runs through China’s defense late in the match.

The game against China was an audition for Favela who aspires to play for the Mexican national team.

“I’m really hoping I can get a spot, that would be fun,” Favela said. “The game really showed where we need to build but what we also have.”

After the match was over, CSUN and China took a bow together in front of the crowd and posted for pictures in a sign of unity between the two teams.

Looking ahead, CSUN is coming off of another strong season in 2017. The Matadors went to the Big West Conference championship game before falling in penalty kicks to Cal State Fullerton. The team is expected to bring in 20 true freshmen from the class of 2018 along with key returners like Favela and Aquino.