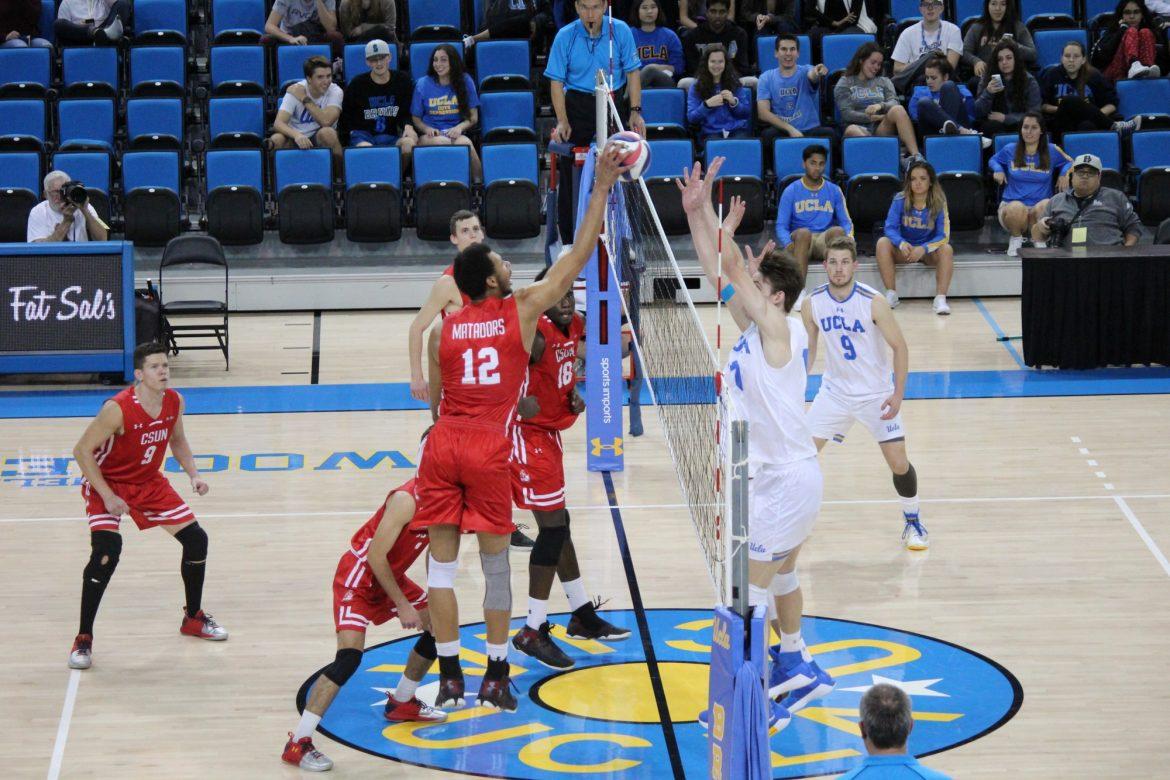 CSUN's Arvis Greene (#12) with the tip into the Bruins wall. Greene had 16 kills but the Matadors fell to UCLA in four sets. Photo credit: Justin Vigil

CSUN (6-4) struggled as UCLA poured in 59 kills in four sets. UCLA opposite hitter Christian Hessenaur had a game-high 17 kills

Senior Arvis Greene led the attack and defense for the Matadors with team highs of 16 kills and nine digs.

A high power UCLA offense hit above .400 for the third straight game in a row while CSUN’s struggles were clear hitting .287.

“We have to step it up hitting wise,” Greene said.

UCLA (11-1) managed five aces while CSUN totaled one. Service errors would be huge for both teams. CSUN had 15 and UCLA had 19.

“They served really well and put a lot of pressure on our passers” Coach Jeff Campbell said.

The opening set contained 14 ties. After a kill by Greene CSUN led 21-19, before the Bruins offense surged with four straight kills. The set would end on two consecutive errors by Dimitar Kalchev giving the Bruins the first set in Pauley Pavilion.

The second set was sloppy on both ends. UCLA and CSUN combined to commit 15 errors. After setter Sam Porter jeopardized the set with a late service error to make the score 24-23, a Kalchev kill would finish the set for CSUN. Porter finished the match with 40 assists

The third set UCLA gained momentum with a 6-0 run and the Bruins led 17-9. UCLA opposite hitter Hessenaur racked up six kills in the third set and CSUN would not recover.

“We just have to get more consistent in our passing,” Campbell said.

The final set was tight until another 5-0 run put UCLA up 18-15 and again CSUN could not recover.

“They went on runs and that was the difference between the second set and the rest of the sets” Campbell said. “We were in command [in the second set] but one, three and four that’s when we gave up runs. You just can’t allow that to happen against a team like this.”

The Matadors now have three days off to make adjustments before facing Stanford (2-8). The two teams will square off Saturday at the Matadome. Game time starts at 6 p.m.