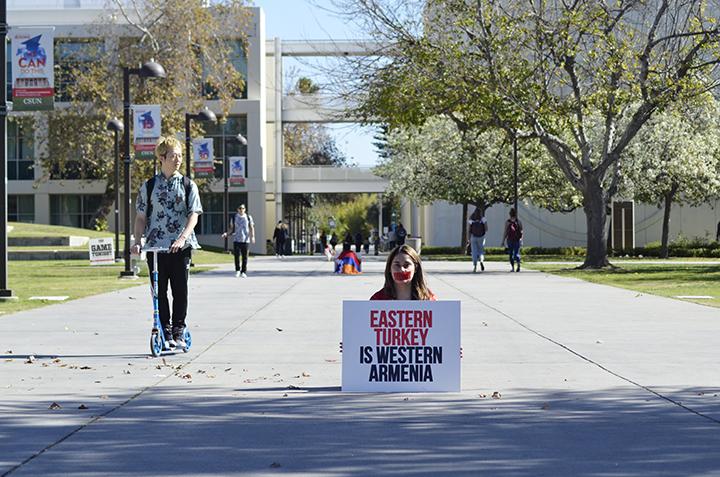 CSUN Armenian Students Association along with Armenian fraternity AEO, took to Matador Walk on Feb. 8 in a silent demonstration to raise awareness for the Armenian Genocide that began in 1915, which resulted in the deaths of an estimated 1.5 million Armenians.

The demonstrations are organized and performed nationwide by ASA chapters including CSUN, UCLA, UC Irvine, Cal Poly Pomona, and Yale, as well as universities in Australia and Europe.

This annual protest is called “stain of denial” according to Araz Maleky, president of the Armenian Student Association chapter at CSUN.

“Stain of denial is held on the same day everywhere on other campuses nationally,” Maleky says. They have done this protest on campus for about 3-4 years.

“The genocide didn’t happen in one day so what we’re trying to do is shine a light on the fact that it’s not just one day we should be commemorating,” Maleky said. “We want to bring awareness.”

Maleky got involved two years ago when she joined the state of denial protest on campus. “Everyone was very friendly, it became a cultural boost, I started to love my culture even more,” Maleky says.

Why a silent protest?

“Mainly because we’re doing it on college campuses, we don’t want it to bring violence, we’ve never had trouble at the CSUN campus, it’s always been peaceful,” Maleky said.

The genocide was never hidden in Maleky’s household, it was something that she was born into and always fought for. “Every year my family and I would go to the march in Little Armenia,” Maleky said.

Her parents are both from Iran and her ancestors are from Armenia. Maleky was 3 years old when she and her family migrated to the United States, around 19 years ago.

The Armenian Student Association chapter is non-political and non-discriminatory. “Our main mission is to educate and create a social environment for college students to get to know the Armenian culture and heritage,” Maleky said. “Also get to know each other and get connections and long-term friendships.”