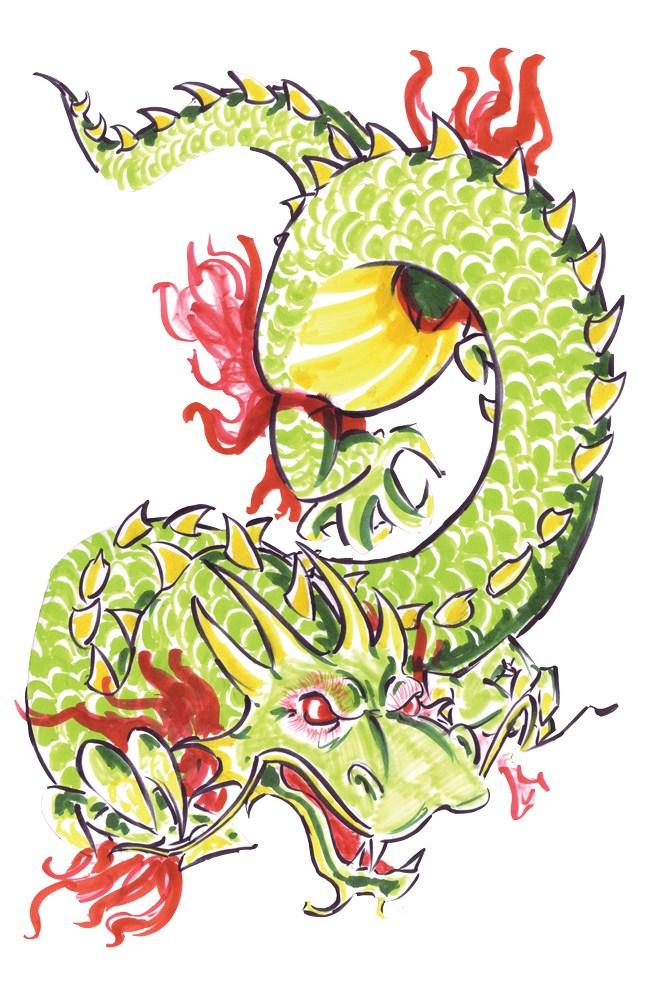 Illustration of a dragon by Gabriel Ivan Orendain-Necochea

For some Matadors, New Years is less about champagne and black-eyed peas, and more about firecrackers and red envelopes. Feb 16. is Lunar New Year, or Chinese New Year. In many ways, the Lunar New Year is as Angelino as Hollywood or the Lakers.

The Los Angeles Golden Dragon Parade is a Lunar New Year celebration that is one of Los Angeles’ oldest traditions, introduced in 1889. Throughout its history, the parade has featured appearances by several mayors, olympians and pageant queens.

The holiday demonstrations aren’t just for show. Almost every tradition of the Lunar New Year has heavy symbolism. The loud fireworks and cymbals are meant to drive off a demon named Nian and the red symbolizes luck and joy.

This Lunar New Year ushers in the “Year of the Dog”. The order of the zodiac symbols on the lunar calendar are based on a piece of Chinese mythology, involving a race between 12 animals.

For Chinese American professor Edith Chen, the Lunar New Year has not always been as accessible as it is today.

“[Because] the Lunar New Year is not institutionalized, we celebrated it privately [growing up],” Chen, Asian American studies professor, said. “Especially growing up in Texas, it was harder to connect [with the Lunar New Year].”

Texas has not always been the most receptive to the Lunar New Year. Lunar New Year parades were only officially introduced to Houston in 2008 and Dallas has only hosted a Chinese New Year festival since 1999.

“It’s harder to find time off to celebrate in the US and sustain the traditions if you aren’t in that community,” said Chen. “It’s like celebrating Thanksgiving and eating turkey without your family members.”

Not just a Chinese New Year

Lunar New year is commonly recognized as Chinese New Year. However, Lunar New Years better encapsulates the diverse nature of those who celebrate this day. For CSUN’s Vietnamese Student Association (VSA), the Lunar New Year marks a significant day of observation for the Vietnamese culture.

In Vietnam, Lunar New Year is identified as a ceremony named Têt. Each year, the Vietnamese Student Association makes a trip down to Orange County to celebrate Têt.

“Têt started in [Vietnamese] villages dating back thousands of years,” said Thinh Nguyen, president of CSUN’s VSA. “While [Têt] adopts many Chinese traditions [for Lunar New Years], the Vietnamese have some of their own traditions, [particularly in] food.”

There are several unique traditions that will take place in VSA’s Têt festival, according to Nguyen.

“People get married at the festival. They wear traditional Vietnamese outfits and eat traditional foods,” said Nguyen. “During the opening ceremony, we have a wishing tree. We have someone dress up as an emperor and escort him around the fair.”

Aside from the China and Vietnam, nations such as Korea, Mongolia and Cambodia have adopted their own interpretations of Lunar New Year. Koreans call the day Seollala while the Khmer (Cambodians) call the day Choul Chnam Thmey.

Lunar New Year for all

So, who should celebrate Lunar New Year? According to Chen and Nguyen, everyone should. While specific cultures like the Chinese and Vietnamese and officially associate with the Lunar New Year, Chen believes this holiday benefits anyone who chooses to part take in it.

“I think everyone should celebrate Lunar New Year,” said Chen. “Whether you’re Chinese, Asian American, etc., just take the day off to be with friends and family. Wouldn’t that be nice?”

“In my opinion, the reason why Asian and Asian American have festivals to celebrate the lunar new year is so that their culture and tradition can be preserved and shared with those around them,” said Nguyen. “If they want to celebrate Lunar New Year, we would be happy to introduce it to them.”

The 119th Annual Golden Dragon Parade is scheduled on Saturday, February 17th, at 1:00 p.m along North Broadway in Chinatown.

The UVSA Têt Festival will run from Feb. 16-18 at 88 Fair Drive, Costa Mesa, 92686. General admission tickets are $6 and the proceeds will go toward funding university VSA clubs.